Taiwanese companies like Gamtec were well-known for releasing unlicensed titles for various consoles, the majority of them with little to no redeeming quality whatsoever. Today Gamtec is an obscure footnote in gaming history, but not too long ago it was indirectly brought to the spotlight with the release of Super Fighter Team’s Legend of Wukong, a translation/reworking of one of the company’s RPGs. Gamtec’s contributions to the Mega Drive shmup library are still as obscure as ever though, consisting of Adventurous Boy (a rehash of Fantasy Zone), Thunderbolt II (with the company disguised as Sun Green) and Magic Girl, by far the single rarest Mega Drive title to be found complete with box. In over seven years of collecting I’ve yet to see a complete copy for sale (note: these games never had proper manuals). Good luck to all collectors who are still trying to find it.

Rarity definitely isn’t a sign of quality in this case. Magic Girl is a basic cute’em up, a colorful, linear, unimpressive title that won't bring any real excitement to those who fancy some 16-bit shooting action. This conclusion is mostly related to how the game plays as opposed to how the game looks. For an unlicensed shmup it’s visually not that bad and it successfully avoids being a rip-off, drawing loose inspiration from established franchises such as Twin Bee. If there’s anything that sounds explicitly derivative is the opening screen and its resemblance to a Looney Tunes cartoon title. A nice attract mode cycles permanently with this screen and shows the wizard girl being summoned to battle in order to save the world from evil, I guess. She's able to fire (button A) and drop spiralling bombs (button B). Unfortunately she gets no willows as rewards, unlike a much more famous flying witch. 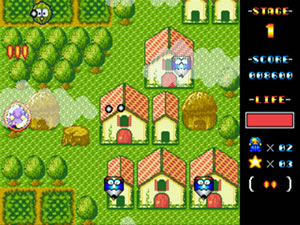 No pencils are going to ruin my magic day!

Upon starting a credit the weakest aspect of the game becomes instantly clear: the choppiness of the animation/scrolling. There’s a constant feeling that several frame chunks are missing as everything seems to move faster than normal and bullets often catch you off guard. All players need to adapt to this, otherwise the little fun to be had here will quickly turn into disappointment. Once you get used to the bad frame rate you learn to avoid being too close to the bottom of the screen, for Magic Girl is yet another shooter where enemies will frequently spawn from behind the player’s frontal perspective. Hovering at mid level is the best way to go, other than that it’s just a matter of managing the items released by clouds that cross the screen from time to time.

Talking about optimum play in a shooter like this sounds a little overzealous since the gameplay is as engaging as, well, a snoozy autumn afternoon... Maybe that wouldn't be the case if some of the items weren't so confusing. Take blue, for instance. Light blue gives the little witch a single wave shot, dark blue adds three rotating orbs with additional firepower capability and dark blue with a faint crosshair inside activates a 5-way shot similar to the famous pattern from Star Soldier. It takes time to correctly distinguish them, and once you do you'll certainly avoid the undesired ones. The problem is that undesired items scroll down slowly and get in the way of dodging.

Besides the abovementioned wave and 5-way shots there's also a homing weapon (yellow), thus comprising three weapon types at the player's disposal. It's interesting to note that once you take the first weapon the initial default shot is gone as long as you don't die. Other items: a bubble shield that can take some hits (the Yin-Yang symbol), extra bombs (stars), points (purple) and full recovery for the character's health bar (heart). The rotating orbs (dark blue) also have a shielding function and don't allow the witch to take damage. Remember that the stock for bombs is unique to the whole game and is not renewed when you respawn after losing a life, which naturally happens when the health bar is depleted. Extra lives are obtained by scoring 50.000, 100.000 and successive 100.000 points afterwards.

It's raining over the desert
(courtesy of YouTube user Warblefly41)

Stage progression in Magic Girl starts with a medieval village in a forest setting and goes through desert (level 2), a rocky landscape with weird statues that look like kid's heads on fire (level 3), outer space (level 4) and waterfalls (level 5). It's all pretty repetitive, with wave after wave of enemies prior to fights against corpulent bosses that move around and attack in predetermined, sometimes cheap patterns. The enemy gallery is varied but they're all bound to appear in similar waves, what changes a bit as the game unfolds are the bullet spreads they fire. Expect to come across flowers, smiley faces, baloons, fireballs, missiles, pencils, bats, aliens, hats, weird haniwas and a few unidentified flying objects. Everything is quite colorful, albeit unremarkable, and the action is at least intense enough to avoid instant boredom. The music is surprisingly catchy (the BGM for stage 2 is nice), but it tends to get overwhelmed by the loud volume of the sound effects.

Provided you can cope with the lame frame rate, Magic Girl isn't a hard game by any means. Of course this happens because of the health bar mechanic, but a few aspects weigh on the other side of the challenge scale. One of them is the high degree of item randomness. Sometimes it takes forever for the homing shot to appear. As a rule, the game seems to avoid granting shields and orbs when you use homing shot, as if excluding mutual advantages from these types of items (homing is definitely the best weapon in the game, with the 5-way shot as a close second). Unlike the norm in pretty much all shooters, bombing doesn't have any panic function here. Bombs do not help at escaping incoming fire, you need to dodge everything otherwise you will get hit.

Twinkle Tale might not qualify as a cute'em up to some people because of its dark undertones, and since Magic Girl is far from being a worthy title it's not hard to realize that the Mega Drive library of vertical cute'em ups is a rather poor one, in a strong contrast with its direct competitors. Magic Girl still stands as a cherished unlicensed rarity, but as a game is lacks substance and ultimately fails to establish any lasting appeal. 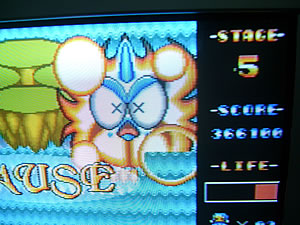 Note: this text was cross-posted with minor changes on Sega-16.
Posted by Edward at 6:59 PM