Following the dreadful commercial scandal of DoDonPachi Dai-ou-jou Black Label Extra and the successful porting of Ketsui, in 2011 Japanese company 5pb figured it was finally time to release its own shooter on the Xbox 360. The result is Bullet Soul, a game that is in lots of ways a homage to the intensity that marks Cave shooters. It doesn’t actually play like Cave (it’s easier) or either looks like most Cave outputs (it’s generally darker), but the heritage is strong in ship behavior and, to a lesser extent, bullet patterns. Other influences are definitely there, such as the largest mechanical beasts bearing close resemblance with those from NG:DEV.TEAM's Fast Striker. Whatever the inspiration truly was, it’s reasonable to say that the high definition sprite-based graphics and explosions are home to a somewhat controversial shooting experience, and that comes from the good old contrast shmuppers inevitably face every once in a while: should you play for survival or play for score?

First and foremost, there are two important elements in Bullet Soul’s gameplay. The most visible one is the fact that all bullets fired by an enemy disappear when said enemy is destroyed. Disappearing bullets continue their original trajectory with a fog-like aspect, in a purely aesthetical effect with no further impact on gameplay. The other important element is the fact that the closer you are to the top of the screen the faster the score multiplier will rise. As one would expect, the combination of these two elements is what defines playing for score, in a risk/reward ratio that encourages aggressive behavior. On the other hand, sitting back and destroying enemies/bullets will make way for a much easier experience, at the cost of measly scores and no access to the second loop when the game is beaten.

The basics are very akin to the trademark Cave style. Tap the fire button to get regular shot and hold the button to achieve a stronger, concentrated shot that reduces ship speed. As usual in these types of shooters both attacks are mapped to different buttons, which is the best way to approach the game after all. Bombs are available at the press of a third button, and an autobomb feature can be activated at the character selection screen by pressing Y. P items power up the ship (4 needed to max out) and B items add extra bombs to the stock (they always appear prior to the boss encounter). The game roster includes three pilots/ships: Yun is a female cop who pilots a blue ship with a straight shot and locking lasers; Zen-ichi is a warrior who pilots a red ship with a wider shot and spreading needle cannons; Sadaharu is the elderly of the bunch and pilots a yellow ship with a drilling shot and locking laser swords. Zen-ichi is the fastest pilot and has the weakest firepower, Sadaharu is the slowest one but pilots the strongest ship and Yun stands in middle ground when compared with her colleagues. 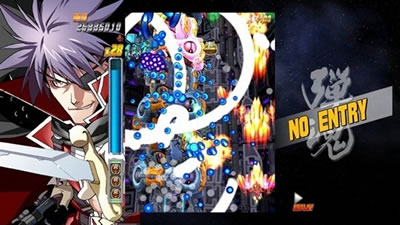 To the left side of the screen a large vertical bar keeps track of the score multiplier, the so-called “soul gauge”. It fills up according to how high in the screen you are when you destroy the enemies (point-blanking also seems to have influence on this, albeit in a smaller percentage). The resulting multiplier is applied to the base value of every enemy destroyed within the level. When the level is completed extra points are awarded for bombs in reserve (2 million each) and completion with no deaths (5 million × stage number × loop). The soul gauge can be affected by turning on the autobomb feature: the multiplier will increase at a slower rate, therefore score-driven players will obviously avoid it. Note that autobomb is useful only against bullets, it does not protect the ship from enemy collisions.

More enemies and nastier/faster bullets await the player in the second loop of Bullet Soul. However, earning the access to the loop requires a minimum level of performance from the player. If you play well enough you get “stars” at the end of every stage, and provided you achieve at least seven of these the passport for the loop is guaranteed. No-missing or dying only once yields 1 star, and doing that while accomplishing a minimum number of tasks within the stage (secret/destruction/special/mystery bonuses) gives 2 stars. 3 stars will be awarded if you also achieve a certain multiplier level. For example, getting 3 stars on the first stage requires a maximum of 1 death, at least 8 of 10 hidden bonuses and a multiplier of ×30.

Since the first stages are easier, very early on I worked on boosting the multipliers and getting all the bonuses I could so that I’d come out of stage 2 with six stars. By doing that even if I missed a life in stage 3 it would be enough to enter the loop. Some of the hidden bonuses require that you stay in the lower half of the screen to get them, thus compromising the multiplier. Therefore getting the necessary stars for the loop early on eliminates the need to get the hidden bonuses in later stages, allowing the player to risk more and focus strictly on scoring (a higher multiplier is always better than hidden bonuses). Score extends are awarded with 60, 120 and 300 million points.

While the scoring system does require a methodical approach to be fully enjoyed (heavy memorization is definitely needed to play aggressively, restartitis victims be ready), this is a shooter that can be appreciated by everybody, even those who normally avoid bullet hell. I dare say it’s one of the best console introductions to danmaku: bullet patterns aren’t overly fast or tough and the difficulty curve is linearly perfect (easy start, reasonably challenging final stage). It’s also good that bombing doesn’t do much damage, serving almost solely as a panic resource in a game that allows all kinds of players to have fun. If you want to blow shit up and just dodge, serve yourself. If it gets boring and you start fancying higher scores the risk factor is totally in your hands. To have an idea of how aggressively you are or you should be playing just go to the online Leaderboards, find the highest ranked players with a “replay” to the side of their scores and watch their runs.

Probably spoiled by all Cave ports and their multiple game modes, many people criticized Bullet Soul for being a supposedly bare-bones release. Besides the regular game the only alternate mode on the disc is Score Attack (Banchou mode), a stage-based variation where you start at full power and scoring rules are changed for the stage bonus (you need to go left or right at the select screen for the main game to find and play Score Attack). Gameplay refreshments include a fully customizable training option for the main game, local and online leaderboards segregated by character for both modes, TATE orientation and the possibility to remap the controls. I guess the main reason for the abovementioned criticism is that in both modes there are no difficulty tweaks available, so everybody is bound to play at the same difficulty standard over and over. Honestly, I don’t see any problem with that since I always play at defaults. The game is reasonably fun as it is, and 5pb should at least be commended for putting out a decent first-time region-free effort, with top notch art design and balanced difficulty for all types of players.

The original Xbox 360 package includes a CD with the game soundtrack - an uneven collection of synth-rock tunes that fit the game’s atmosphere but fail to fall into the category of remarkable. A nice animated intro in the boot process shows the characters, and further presentation/navigation is pretty functional and easy. A few months after the game was out 5pb tried to address the complaints by releasing extra download content for Bullet Soul in two DLC packs. From a quick online research I found out that the extra stuff consists of a 2-minute Caravan mode and a new take on the main game (version B) with a 4th character, rebalanced difficulty and easier requirements for the loop. I haven’t bought the DLC (against my principles), but for those who like these kinds of things I guess the new modes are a valid purchase.

After testing all characters I settled with Yun. Her speed is just right for my dodging abilities and I like the spectacle of her lasers latching onto the parts of bosses. The high score below came from a botched run with an awful 4th stage (died 3 times there), to which I got extremely angry but refused to give up. I entered the loop on my last life and still got to stage 3 again. At the time of this writing this score ranked me 21st on the leaderboard for Yun. 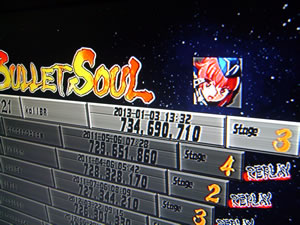