Once there was a baby dragon who adored his princess. He loved her so much he even launched himself in a quest to avenge her being turned into a midget troll by a mindless fiend. That’s the story to the Japan-exclusive cute'em up Coryoon - Child of Dragon, an impressive but at the same time disappointing game that also carries the fame of being one of the PC Engine’s rarest and most expensive shooters. A colorful, fast and incredibly easy experience awaits those who’re bold enough to own it or comfortable enough to emulate.

If you’re familiar with the much cheaper Air Zonk/PC Denjin you’ll feel right at home with Coryoon, simply because both games seem to have been developed over the same mold. They’ve got the same vibe and excel at the same technical aspects, even though Coryoon takes the cake as the most accomplished of the two. Suffice it to say that despite the hectic action the game remains almost absolutely free of slowdown, something that Air Zonk wasn’t able to avoid during its most intense sections. We’re talking about really impressive programming here, especially considering how technically limited the PC Engine is when it comes down to graphical effects such as parallax scrolling. You need to really overload pixel manipulation to see Coryoon start to choke with sprite flicker, and that's not easy to do.

Baby dragon meets all kinds of crazy flying creatures across eight stages full of bosses (two per stage and a boss rush in the final level). He can certainly do lots of things for such a little creature loose in a nasty magical world, and one of them is to spit three types of attacks defined by the cycling orbs brought by storks (button II): flame (red), wave laser (blue) and lightning bolts (yellow). Sticking to the same weapon type will increase its power in three steps. Upon switching to a different weapon the power level is properly preserved, but if you get hit the weapon is lost and you’re left with the default basic pea shooter. This is the only condition that results in death if baby dragon takes a hit, and half the reason why the game is so easy. The other half comes from the fact that the game grants extends like candy in Halloween. Seriously, I didn’t even bother to take note of the extend interval, if you don’t die you might as well come out of the first stage with 8 lives in reserve instead of the starting 4. 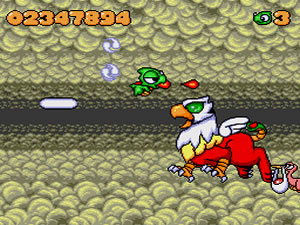 "I'm not bored of the action, I'm just blinking!"

Baby dragon can also fire a charged flame attack if you refrain from shooting for a little while, as well as toggle between two different flying speeds with the SELECT button. Four special powers are at his disposal according to the card suits released by certain enemies, but you can only use/activate one suit at a time. Hearts adds two rotating options that lock in vertical position when button I is pressed. Diamonds shrinks baby dragon but doesn’t let him use the charge attack anymore. Spades is your good old smart bomb, detonated with button I. Finally, clubs works as a fruit magnet as long as you keep button I pressed. Fruits, by the way, are what give Coryoon its visual intensity: all enemies release varying sizes of fruit, and since they’re worth lots of points the game soon turns into a collecting frenzy.

A last item to be collected appears when you destroy a white chicken. It gives the player a homing little dragon that hovers around the screen shooting and causing random damage. You don’t lose it even if you die, but the thing will flee whenever you meet a boss. The chicken doesn’t appear often though, unlike the storks that bring power-up orbs. It should be noted that whenever an enemy is killed with the charge shot it won’t release any fruit or item, so killing the white chicken this way will not give you the little dragon-option.

Being visually impressive is Coryoon’s best trait, with color schemes that change constantly throughout several standard motifs for stages (forest, castle, fire, water, caves, etc.). Baby dragon itself is always switching colors according to the weapons he's carrying. The open world of the game lends itself to a fast paced journey where the screen is almost always full of stuff flying around. Besides having to deal with fruits falling everywhere, players can be easily confused by dying enemies that vanish in distracting explosions. It takes a little while to grasp what’s going on and fully understand how all extra items work (I beat the game on my first try and didn’t even get to understand the meaning of all items). Card suits appear after you destroy a certain number of enemies, but you can never guess exactly when or where they will materialize. Consequently it’s pretty common to accidentally switch to a different suit. Losing clubs made me upset because the fruit-sucking ability is easily the coolest thing about the game. Out of sheer pride I’d rather die than pick up another card suit (dying strips you off every power and item you’re carrying).

While Coryoon boasts lovely artwork and implements neat gameplay details, such as giving points for shots landed on bosses, extra bonuses for every surplus items you collect and a very brief invincibility window every time you take a power-up (useful to escape incoming attacks), it disappoints by not imposing timeouts on bosses. You can theoretically counterstop the game by milking fruit from their attacks, which hurts the experience for those who enjoy chasing higher scores. Had it had time-limited boss fights and less extends Coryoon would certainly be one of the best PC Engine shmups out there. Just for the sake of comparison, it looks and plays better than Air Zonk, only losing in the soundtrack department. The music doesn’t hurt but doesn’t stand out either, with no memorable tunes whatsoever. Baby dragon has a healthy array of voices though, and he really seems to like pineapple!

Caravan lovers will appreciate the fact that the game has additional 2-minute and 5-minute score attack modes (press SELECT at the start screen to cycle through all options available in the menu). Secret codes can be input at the sound test to gain access to other game variations, such as an option with black & white graphics and a no-fruit mode.

Once the game is beaten the credits roll and halt at an ending screen, but resetting the console (SELECT + START) adds to your score a final bonus of 2 million points for each remaining life. Assuming the result surpasses the highest score that’s displayed in every screen that doesn’t belong to the credit you’re playing, it will replace it and be saved for eternity as long as the internal battery of the console doesn’t die. Here’s my final result: 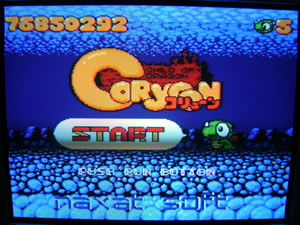