I believe most people will agree that insects are always a cool subject for any video game. I was always intrigued by the timeline of the insect theme in shmups, but never really paid any attention to Exed Exes until very recently, when I had the chance to dedicate some time to the arcade version. Excluding the primitive insect-like alien enemies of the unscrolling classic Galaxian, this game is probably the legitimate forefather to later stuff such as Cyber Core, Apidya and Mushihimesama. Coming after Vulgus and 1942, Exed Exes (also known as Savage Bees in the West) was part of the initial batch of arcade shooters developed by Capcom and, as such, presented extremely challenging gameplay despite its primitive looks. At that time the only port to appear in home consoles was the one for the Famicom, with no counterpart ever released for the NES.

The Famicom version squeezes the original arcade content and turns it into an extremely watered down game. At least it retains the hypnotic minimalistic music and the hexagonal hive-like texture that covers most of the ground areas - both distinctive aspects that define the aural/visual concept of Exed Exes. Sure, parallax scrolling is gone and those lovely buzzing sounds of insects dying are replaced by common beeps, but that was to be expected in an 8-bit port. What leaves a lot to be desired is the poor frame rate, the washed out colors, inherent flaws related to flicker and an overall feeling that the game is marred by poor programming. Well, online info points that the company behind the port is infamous Micronics, even though no mention is to be found anywhere in the game itself, nor in the box or manual… 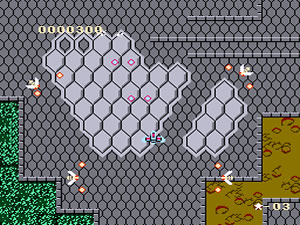 Do bees sting harder than wasps?

A life in the world of Exed Exes starts as soon as the several parts of the ship are put together. You’re equipped with a forward double shot with limited reach, so if you want to kill enemies as they appear from the top of the screen you’re forced to stay far from the bottom line. Powering up is done by taking colored Pow icons inside a circle: there are only two of them, and the upgrades consist solely of a power increase in the default double shot or a thicker triple shot. Besides shooting (button A) the player is also able to deploy a smart bomb (button B) whose sole function is to get rid of all on-screen bullets. Enemies suffer no damage from it whatsoever.

Other items serve different purposes than powering up, such as the inverted Pow. Inverted Pows send the ship back to its default shot level, granting 10.000 points for the sacrifice in firepower. The yellow Pow transforms every enemy in different kinds of fruit for some valuable extra points (the bigger the enemy the bigger the fruit/reward). Yellow Pows appear mostly within the “hi-point areas", which consist of specific sections in odd-numbered stages where enemies aren’t allowed to shoot back at you. Hi-point areas are preceded by a screen blinking effect and end with a proper –END– message. Stars will pass across the screen once specific score milestones are met, and besides adding new smart bombs to the stock they’re also worth 5.000 points. Last but not least, some ground turrets might drop fruits with varying bonus values.

There’s a rhythm to how enemies are spawned in Exed Exes. Ground turrets have little variation (some shoot, some don’t), but it’s important to observe three things about flying enemy flocks: (1) every enemy has the same specific behavior, (2) enemy types are never mixed within the same wave and (3) the next wave of the same enemy type will only appear when the last one of the current wave is destroyed or leaves the screen. Bees, for instance, are the most common type of enemy and follow the single pattern of appearing, shooting two bullets in a V-spread fashion and disappearing on the other side of the screen. Dragonflies appear from the bottom and drift up after shooting three spread bullets. Beetles rush into the screen trying to crush the player, and flee after a while without shooting. Flies come down in a staggering pattern and might shoot as they’re about to leave the screen. Stingrays line up on the top and dive towards the player, but don’t shoot. Skulls might appear isolated or in spinning circles, while big bugs move around the screen in the most diverse patterns dropping destructible bombs (they’re the ones that take more shots to destroy). If you don’t destroy the cross-formations of orbs known as “desura” when they initially show up, as soon as they reappear in a different place they will shoot. Finally, one of Capcom’s famous benign items (the yasichi, a colored circle that looks like a lollipop) assumes a rare malevolent role, descending upon the player in groups of four.

Most of the time spawning places and trajectories of flying enemies are dictated by the player’s current position. Although they don’t get mixed in the same wave, multiple waves of different enemies get increasingly more common as the game progresses, and they even start coming during boss confrontations. Bosses might appear more than once in a stage and consist of different floating formations with a varying number of four types of turrets: skulls, radars (both 5 shots to kill), guns (10 shots to kill) and dark guns (25 shots to kill). No shots are fired from radars, but if any radar or dark gun is left for last the boss might descend upon you and escape. Due to the amount of bullets fired, bosses definitely pose the biggest challenge in the game, almost giving Exed Exes a semi-bullet hell feel. Unfortunately it’s just too much for the Famicom to handle, and the result can instead be labeled as "flicker hell". The game is already very slow, so I didn’t really care about any extra slowdown.

Even though this port does nothing wrong besides being slow and boring, poor graphics and awful color options are also to blame for its lack of punch. Omissions from the arcade version are kept to details (ship thrusters moving, reduced number of fruit icons, no indication of damage on larger enemies and radars, less configurations for bosses). Flicker abounds, but at least the hit detection isn’t dodgy. You can only see your life stock when you die or when an extend is achieved (first for 50.000 points and further ones at the hundred thousands). As in the arcade original, killing complete waves of some enemies results in extra points.

In order to consider the game looped you need to beat stage/round 16. This last stage is notorious for having lots of bosses, with the final one being the hardest configuration of all: a SUPER EXES armed only with dark guns. Exed Exes for the Famicom/NES does not have autofire, and since it prevented my turbo controller from working I had to mash those buttons all the way until round 20. Here's the result: 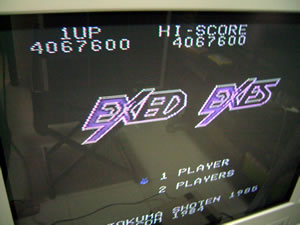