From all Mega Drive games, Hellfire holds a special place in my gaming life. It was one of the first titles to arrive in the mail as I went on a buying spree to build up my collection from scratch, and the first shooter I played during the time I was starting to realize that shmups were my favorite genre of all. I dusted my old console from the closet and played the game non-stop for a few weeks, but eventually I moved on to other games because I couldn’t beat it. In a sense, having looped it now feels like finally bringing some sweet unfinished business to a close. Yes, I know that combining “sweet” and Hellfire in the same sentence sounds awkward. After all, this is a case where the game definitely lives up to its name.

First of only two horizontal arcade shooters ever released by Toaplan, Hellfire held the distinction of bringing something really fresh to the table with its emphasis on directional firing. Soon the game was ported to the Mega Drive and the PC Engine CD (as Hellfire S). In the case of Sega’s console it also found its way to Europe and the Americas, unlike what happened with NEC’s port. This was a slightly better fate than what happened with Mega Drive’s Zero Wing (the only other Toaplan horizontal shooter), whose great qualities were deceptively overshadowed by an Engrish-ridden European port. Both titles share similar graphical designs, but all things considered perhaps the most interesting distinction of Hellfire on the Mega Drive is that the game is seen by many as an improvement over the arcade original.

Once the ship takes off from a large cruiser, enemy drones provide the initial resistance and destroyed turrets start releasing the first items, including speed-ups (S), power-ups (P) and bonuses (B). Controls work in a three-button arrangement: fire with button A, switch firing direction with button B and release the hellfire laser beam with button C. There are four color-coded firing directions that cycle in the following fixed order as you press B: (1) forward/pink → (2) rear/yellow → (3) verticals/green → (4) diagonals/blue → (1). The hellfire laser (button C) melts bullets and damages whatever is in its path as an extremely fast energy beam is discharged by the opening of the ship’s rotating flaps. Stock for hellfire is limited and independent of life count, with new ones showing up every once in a while for you to take them. 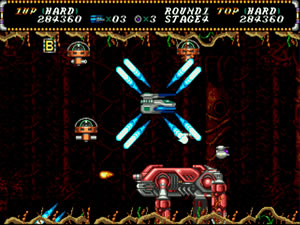 There are a few other items besides the abovementioned ones. In every life you come across a small option that has a mind of its own and attacks enemies at random, sometimes blocking bullets as well. I like to think of it as Hellfire’s luck factor – it’s not uncommon to notice you’ve just been saved from death by its providential help. There's also a 1-hit shield that makes the ship glow. Once lost, if you live long enough a new shield will eventually come by. And if you’re in a lucky streak a 1UP (extra life) might also grace your way, generally as you fly over the shrimp/volcano river of the fourth stage.

For those who like to rack up high scores the single most important item of all is the score bonus. By taking successive Bs they will eventually be worth 10.000 points each (you get 40, 80, 160, 640, 1.280 and 2.560 from the first six). Powering up increases shot power up to five levels, and once you’re fully powered the P items cease to appear. Assuming the shield is active and you’ve already got the option, as soon as you're maxed out all items will come in sequences of one speed-up and three Bs, with the occasional hellfire laser in between. That’s good motivation to try and get through the game on one life, right? Getting back up once you die becomes increasingly tougher, to the point where dying in the last stage makes you want to reset the game in disgust. If you’re already underpowered when maxed out, how in hell are you going to take out those alien battleships at default conditions? That’s why memorization and strategy (meaning proper usage of directional firing) are essential to succeed against one of the most brutal checkpoint systems I’ve ever seen. Note: die again quickly and you’ll be sent even further back than the currently reached checkpoint.

Probably because there are only six of them, levels in Hellfire are a bit longer than in the average horizontal shooter. The game is full of mid-bosses (sometimes more than one per stage), and the design might change several times before you reach the actual bosses, most of them with weak spots that resemble the cores from Gradius. The enemy roster is quite varied and includes turrets of all sizes and shapes, waves of robot walkers and saucers that close in from all sides and corners, mechanical machines that release deadly heat seeking missiles, alien puppets jumping out of nowhere, sphere arrangements from hell, volcanoes amidst treacherous shrimp-like creatures, giant rockets, biomechanical battleships, etc. The second level is especially amusing for its full-blown Egyptian motif, complete with pyramids, a myriad of statues and idols and a sarcophagus boss. The music also shines is this particular stage, and while it’s not my favorite soundtrack Hellfire’s collection of tunes is likable enough.

In a few parts of the game, most notably in middle sections, the scrolling speed picks up considerably as a boss enemy or a series of obstacles goes by really fast. It's important to notice how this acceleration seems to heighten the difficulty as you must weave through a cloud of aimed bullets (take out the fast scrolling and you'll see the simpler picture). Though no flicker is to be seen the game slows down in a few parts, thankfully it's not jerky or gamebreaking at all. Difficulty choice is kinda cruel since it goes from EASY (default) to HARD. VERY HARD (also known as "Yea Right") can be activated without looping the game by letting the difficulty rest on HARD for one minute in the options menu.

I can think of a few reasons why Hellfire on the Mega Drive might be considered superior to the arcade game. With the exception of some sections in the last stage it does retain the original layouts (textures, shades and colors non-withstanding), but the simple fact that the ship changes color according to the weapon you’re using is an awesome improvement. Originally the B item granted a single value instead of the cumulative bonus of this version, which also has the option, the hellfire beam and the checkpoints as exclusive features (the most interesting thing is that I always thought the game’s name came from the hellfire attack...). Another change is that the Mega Drive port ditches the laser aspect of the regular shot and gives it a more common stream-like nature.

Hellfire is definitely brutal, but never cheap. Brave players prepare for an incredible sense of achievement. Toaplan's finesse is all over it, with solid gameplay and impeccable hit detection. There are, however, some differences between the Japanese and North American versions of the game. I noticed that the large battleships of the last stage are immune to the hellfire beam in the Genesis version (damn!), and a few of the saucer waves in the last section of the 4th stage have different arriving positions. The Genesis game gives the first extend at 70.000 points and further ones with every 200.000 points, whereas the Japanese cyclic extend interval is reduced to 100.000.

I played the Genesis version. Once I looped the game on Hard I died somewhere after the mid-boss in stage 1. "Yea Right" is pure evil and turns an already brutal game into a nightmare! Final high score below: 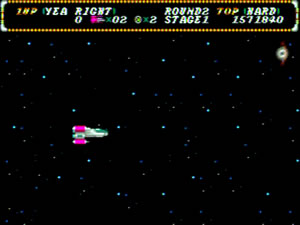