Time for a revelation from my childhood: Airwolf was my favorite TV series as a kid. Every time I watched an episode I’d go out and find a way to mimic the action from the show in my backyard. Blue Thunder? Airwolf could trash that puny helicopter with a single fart! Born and dead within the 80s, the show was successful enough to give birth to a few video game adaptations, ranging from an arcade title to computer/console variations. Super Airwolf is the name of the Japanese Mega Drive entry, but Kyugo thought that by 1991 probably no one would remember the series in the US and renamed the game as Crossfire. Even worse, they removed all references to the show and replaced the characters with generic designations: Hawke became Billy, Archangel became an inane talk-show host figure, the Airwolf itself appears as the "Black Eagle" and the trademark musical theme was removed completely. As a result, many people who shun imports have no clue that there’s an actual Airwolf game for the system. Not that they’re missing much, at least from a gameplay standpoint.

Crossfire/Super Airwolf is an original game, not a port. However, the overall feel of a poor man’s Twin Cobra mixed with a pale imitation of Commando does not vouch much for originality. That’s not what really botches the game though, there are plenty of unoriginal but decently designed shooters out there. Aside from music and character's name changes, Crossfire is exactly like Super Airwolf, and both games suffer from floaty controls, lame hit detection, uneven difficulty and repetitive gameplay. The only aspect that should be important for any player/collector is how much you'd like to listen to the main theme and see the references to the TV show in the game. If that's the case, go for the Japanese version (Super Airwolf), otherwise any of them is acceptable. Crossfire is kinda rare though, that’s the one I own and played a few days ago.

Gameplay works in a mission-based fashion. In each mission the main objective is to rescue a kidnapped head-of-state that’s being held hostage in a country in Central or South America. The order of the first three missions is defined by the player (A - Guatemala, B - Cuba, C - Panama). Once they’re accomplished two other selectable missions are unlocked (second raids over Guatemala and Cuba), and after that the final strike against the narcotic king takes place in Colombia. The later the alphabet letter the bigger the reward, starting with $10.000 for Guatemala and ending with $200.000 for Colombia. These rewards are of utmost importance because you need the money to equip both yourself and the chopper with defensive capabilities and better weapons. 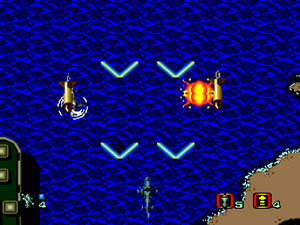 The beauty of a fully powered laser

Prior to the start of every mission you need to select shot and bomb types for the helicopter, as well as gun type for the ground campaigns. Starting in the second mission you’re also asked if you want to go into the shop to buy weapons/upgrades with the money you’ve already earned. Once started, all missions share the same structure: (1) fly over enemy territory, (2) reconnoiter the grounds outside the target base, (3) infiltrate these grounds on foot, (4) go inside the base to rescue the kidnapped head-of-state and (5) fly out to defeat the boss at the end of the stage. Phases 1 and 5 unfold as a regular vertical shooter, phases 3 and 4 are overhead action areas and phase 2 is a strange close-up vertical approach where the Airwolf itself is invincible. Some transitions between these sections come with a neat cut scene showing the chopper taking off or descending. Helicopters, boats, planes, jets and turrets comprise the bulk of the opponent forces, but occasionally you’ll come across flying discs imported directly from Xevious. Yes, those nasty terrorists are also using alien technology!

Controls change depending on which part of the game you’re playing. In chopper areas A is shot, B is bomb and C is “turbo” (stock-based temporary invincibility). In walking areas A is shot, B is jump and C is “transceiver call” (the guy ducks and the chopper appears to provide help, fleeing after a while). Whereas the faults in the game are less severe in the flying sections, in the overhead parts you really need to get used to the offbeat hit detection and the fact that you can’t shoot at what’s past you. The jump feature is pretty much useless, most of the time you try to use it you end up landing your ass on an enemy bullet. To increase the chances to get through these areas unscathed you have to destroy as many turrets as possible during the helicopter approach (all turrets destroyed in that part will not appear in the outside action area, everything else will). Don’t be greedy with the transceiver call, use it when too many enemies are behind walls or when one of those tanks threats to take you down. When inside the enemy base, be on the lookout for walls that can be destroyed.

In the flying section the shadow of a huge stealth bomber precedes the arrival of pick-up items. You can come across Ps (power-up), Bs (bomb), Ts (turbo) and 1UPs. Larger enemies will explode in money bills, and smaller planes might release ? items that upgrade the chopper faster than the P item does (each upgrade or new bomb/turbo/1UP stock takes two to three items to register). Adding to the awful implementation of enemy AI (you practically don’t dodge, you need to obliterate enemies before they cheaply do you), the items themselves often float in completely annoying patterns around the screen. As for the items in the walking sections, the only ones that might appear are $ coins from selected enemies and extra radio help (contrary to what happens in the flying parts, each item corresponds to an extra transceiver call).

A good strategy on the purchase of new weapons helps a lot in the long run. Since stage A does not result in a decent reward, starting from stage B or C is recommended if you want to buy a new weapon as soon as the first mission is completed. However, I stuck to the alphabetical order and adopted the following strategy: buy “laser” after Cuba, buy “protect” and “body” after Panama, and after the second raid in Guatemala buy “hyper” gun + a different bomb type (I like “thunder”). Protect and body add a 1-hit shield per stage to the helicopter and the pilot respectively – they’re probably the most important items to get because even after you’re able to avoid the trickiest attacks it’s not hard to get hit by the most unexpected bullet. As a consequence, the game is much harder in its first half than the second.

It's a promise: this is Super Airwolf for the Japanese Mega Drive
(courtesy of YouTube user Warblefly41)

Engrish and cosmetic changes aside, the music in Crossfire/Super Airwolf lacks variety in both releases. There are only three themes playing for all stages, one for the vertical shooting part and two for the top-down action bits. The BGM for the shooting section of Super Airwolf is a rendition of the main theme from the TV show, but in Crossfire what you get is something completely different. Fortunately this one tune in the Genesis version is at least decent, with a 16-bit Toaplan vibe that could easily make it be mistaken as an unused track for Fire Shark. The problem is that, no matter what music you get, it does get repetitive after a while. Boss themes show some variation later in the game, but sadly they’re quite unremarkable.

While it fails to engage players because of the disappointing gameplay, Crossfire also misuses the only novelty that could help make it more enjoyable: the shop system. For example, the shop doesn’t allow you to buy more than one extra life per game, which is priced at $50.000. Therefore you can’t really spend all the money before the last mission, unless you’d like to get weapons you won’t use anyway. On top of that, the game will not register the score you achieve on the last stage: the highest score you get for your credit is the one that’s briefly shown as you collect the reward from the 5th mission. The apalling disregard for scoring is such that the only moment where you can actually see your highest score is during that 1-second opening screen for any of the selected missions. It’s as if the game didn’t have any scoring system to start with.

And below is my final 1CC result (Normal difficulty), with all missions executed in alphabetical order. I didn’t get to hear the awesome Airwolf theme, but I guess I did “make a success”. 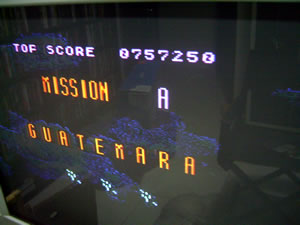