Considered by some to be the unofficial first game in the Gradius series, Scramble also holds the distinction of being the first real sidescrolling shooter in the history of arcade games. It's no surprise then that it's included in the Konami Arcade Classics compilation title for the Playstation (that's the US/NTSC designation, the Japanese counterpart is named Konami 80's Gallery). An interesting thing I found about about this compilation is that it is, in fact, a straight port of an arcade title called Konami 80's Arcade Special. I never even thought such compilations existed for arcade boards.

Konami Arcade Classics is one of those collection discs that comes with a fully animated intro based in bits and pieces of all games included in it. It's got a nice interface, historic notes on each of the 10 games, manual save/load capability and brief instructions while the selected game is being "booted". It's nothing fancy or out of the ordinary, but it's in line with the aspect of the games at display, all of them originally released between 1981 and 1985. My feeling is that they're all quite obscure at this day and age, at least the games that aren't shmups don't ring a bell with me at all (with the exception of Yie Ar Kung-Fu). Other shooters included are Time Pilot, Gyruss, Pooyan and Super Cobra (Scramble's direct sequel).

So what is Scramble about? A simple answer is that you're in control of a weird spaceship that resembles a Star Trek Enterprise model. Fly from left to right, blow up stuff and destroy the final base at the end of the loop, then repeat. 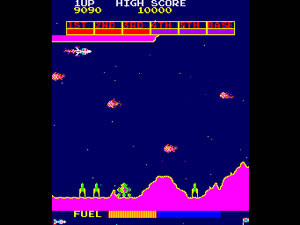 Meteors in the night

Unfolding on a screen whose height exceeds its width (meaning this is a horizontal shooter running in a vertically oriented monitor), Scramble is a straightforward game with primitive graphics, simple controls and tight action. With only 6 stages glued to each other, it's very short and loops roughly at every five minutes. Colors are constantly changing, in a cheap attempt to give the game a little more graphical flair. Infinite looping is prevented not because enemies get more aggressive, but due to the implementation of an increasingly more demanding need to refuel the craft. There are several buildings/tanks with the word FUEL on them, and in order to keep on playing you need to destroy them at a regular basis. Eventually it comes to a point where missing a fuel target means imminent, certain and unavoidable death.

Refueling and destroying enemy threats is accomplished in two ways: shooting with button ○ or dropping bombs/missiles with button ×. Bombs/missiles develop a characteristic arch in the air until hitting the ground, and since it's only possible to have two of them on screen at any time the player needs to time them carefully if he/she wants to hit targets in an orderly fashion. Getting used to the terrain and the movement pattern of incoming obstacles is the next step in learning how to infiltrate and get far into the "Scramble" system, but keep in mind that you're only allowed to fly halfway the screen. The game doesn't let you move past the vertical centerline.

Here goes a quick breakdown of all phases/levels:
Every time the game loops the only thing that changes is the rate of fuel consumption.

I like to think of Scramble as a very nice game for scoring purposes. Sure it's primitive, but it's also strangely addictive with its emphasis on aiming and fuel control. I hadn't noticed until now that the score counter increases by 10 for each second you're alive, more or less to the rhythm of the background noise that's supposed to convey the sound effect for flying. By the way, sound effects are so appropriate here that I don't even care about the lack of music. There's only a short theme that plays when the credit starts, after that it's all about beeps and explosions.

The port of Scramble included in the Konami Arcade Classics disc (US/NTSC) doesn't come with options for screen adjustments (such as TATE) and lacks the display of flags that keep track of the number of loops played. Everything indicates that this is the harder version distributed in the Western market by Stern Electronics, as opposed to the Japanese regular version (such as the port released by Hamster for the Playstation 2 or the MAME ROMs floating around the Internet). Some of the main differences are: fuel consumption reaches its peak in the 3rd loop, missing a single fuel tank there is fatal; on the last lower narrow passage of stage 5 there are three fuel tanks, in the Japanese game there are none; apparently the missiles in stage 4 are more aggressive here, and hit detection inside the tunnels seems to be less forgiving.

As I started playing I was aiming at surpassing the high score I had for the Playstation 2 version, but despite all my efforts the best result I could get is the one below. If I remember correctly I reached section 5 in the fourth loop. 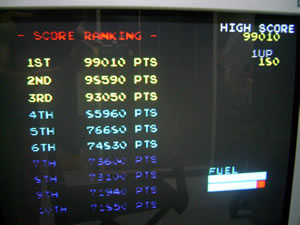