Sure, Burning Force on the Mega Drive isn’t graphically the same as the gorgeous arcade game released by Namco in 1989. Yet it has always pleased me in ways I can’t quite describe, as I kept getting back to it ever since I purchased the Sega Genesis version a few years back. I guess it’s the mix of a decently-done scaling job (for Mega Drive standards) and the great soundtrack, to which I hereby profess my admiration. Have you ever fallen in love with the music before actually playing the game? Burning Force is such an example for me.

With a sci-fi motif naturally punctuating every corner of its design, Burning Force is a straightforward adventure with perfect length and variety. Stages are divided into short sections with plenty of bosses, the enemy gallery never feels repetitive and there are enough details to distinguish the game from being just another rail shooter inspired by Sega’s highly influential Space Harrier. The heroine, a young cadet name Hiromi, takes control of a floating hoverbike and a spaceship across several landscapes in the course of a week (each stage is supposed to happen within a day, stage 1 = day 1). 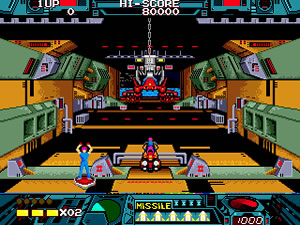 Receiving an upgrade to fly!

“Rail” shooting, in this case, comes in two flavors. With the exception of the last level, every stage is divided into four areas. Areas 1 and 2 (morning and afternoon) unfold in a single plane as Hiromi pilots the hoverbike, moving left and right over a flat surface in what could be seen as a heavily tilted fixed vertical shooter. In the beginning of area 3 (night) her bike enters a large cargo ship and receives an upgrade to be able to fly, hence turning the gameplay into a full-fledged rail shooter (she flies into the screen with freedom of movement in all directions). These areas end with boss fights, and while inside the cargo ship Hiromi is given hints about weak spots on the stage boss to be defeated at the end of area 3. Area 4 has no enemies and consists of a short bonus round. Unlike the previous levels, stage 6 has just one flying area that leads to the final confrontation against the last boss.

Both the hoverbike and the spaceship share the same arsenal and inputs. Fire the main weapon with button A, fire missiles with button B and activate invincibility with button C. Weapons are changed by collecting the appropriate icon: W is a wide shot, L is a thin laser, and Cl is a wave-like cross-laser. Missiles have limited ammo and can be either M (growing radius blast) or H (five homing shots fired at the same time), and each icon provides a stock of five missiles. In order to trigger temporary invincibility you need to collect five green orbs released by destroying selected ground obstacles. Ground ramps make it possible to “jump” and take the floating power-ups during hoverbike levels. Unfortunately, no upgrades are to be collected for any of the attack options, and you can’t stock more than five missiles or one invincibility at a time.

One of the most interesting aspects of Burning Force is the HUD that covers the top and the bottom of the screen. Besides showing basics such as the score, number of lives and number of missiles, it also includes indicators for ship speed during the hoverbike areas (press up or down to control it), danger due to enemies coming from behind (you also hear a characteristic sound cue when this happens) and a decreasing counter that always starts at 1000 (the remaining value is multiplied by 10 and converted into points if you manage to beat the boss before it reaches zero). Each life has three health cells, with no way no recover lost health during the course of the game. Dying has a neat animation sequence: the bike/ship explodes as you get ejected from it, and you fall right into the cockpit as the next one materializes from thin air. I guess warfare technology in the world of Burning Force is definitely ahead of our time. Note that colliding against enemies is bad, but crashing on a static obstacle doesn’t cause any damage.

From dusk till dawn
(courtesy of YouTube user Callofgun)

Day 1 takes place over the ocean, day 2 on a desert, day 3 inside a sort of castle, day 4 across a green prairie, day 5 in a bright cold world and day 6 in outer space. The scrolling effect has its limitations, but it gets the job done at all basic levels. Colors are also used with good taste, and while the horizon landscapes remain static and never change, all wave/checkerboard surfaces are nicely rendered and remain considerably clean so that you can always see what’s coming. The highlight is definitely the bonus areas (they even have a Sonic vibe to them). The final level is a complete letdown though, there’s no scrolling at all besides the notion you get from the approaching rocks and enemies. Thankfully the soundtrack is excellent and keeps the good vibe going at all times - my favorite tune is the theme for day 5, it’s pure groovy awesomeness.

Even though the intensity isn’t the same as in the arcade original, the action is never dull in the Mega Drive port. With a few exceptions, such as the boss in area 4-1 and the whole last stage prior to the final boss, dodging and avoiding obstacles is perfectly manageable even on the highest difficulty setting. Hit detection can be a little iffy at times, but memorization eventually helps you avoid cheap damage from bulky enemies (the boss in area 2-1 is one of them, he rams into the dead center of the screen as he shows up). Invincibility is there to allow extra protection on these parts, and going the distance is made easier with two extends at 150/400 thousand points and the extra lives you can get from bonus areas. To win an extra life is simple, just collect all ten stars that appear within the lines of bonus tokens. Scoring higher is achieved by finishing stages faster for better time bonuses and getting the most out of the bonus stages.

Though not nearly as hard as After Burner II but with a challenge level that’s definitely above the likes of Panorama Cotton or Space Harrier II, Burning Force offers an ideal dose of fun for those looking for a good rail shooter on the Mega Drive. Its strengths pretty much make up for the weaknesses, I only wish the female character motif had been a bit more fleshed out. I graduated her to “space fighter” on Hard and improved my old high score in almost 4% with the 1CC result below. 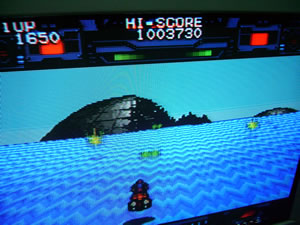