I know that many people consider Mushihimesama Futari to be Cave’s best shooter. On the outside it’s admittedly more intense, flashier and meatier than Mushihimesama. However, I hereby declare my favorite of the two to be the one that’s the subject of this post, and I’m pretty sure Cave must agree with me to a certain degree. After all, this is the only shooter series I know whose first game, having already been available for a previous console generation, was also released for a superior platform years after the sequel. Honestly, when Mushihimesama hit the shelves for the Xbox 360 I thought it was a step backwards business-wise… As much as I loved the game, why not put the effort on porting Progear or Dangun Feveron instead? Granted, if Cave felt they needed to dig up the first game from one of its franchises for the Xbox 360 I can only be glad they chose my favorite one instead of Ibara, Espgaluda or DoDonPachi.

Dearly shortened to Mushi by most shooter fans, what we have here is a game that in my opinion epitomizes and excels at every single design aspect related to the shoot’em up genre. In that sense, the Xbox 360 port is its definitive home version, packing even more extras than the often underrated port for the Playstation 2. It’s got the basic game, an arrange mode, a novice mode and an extra 1.5/MAX mode accessible by means of a free download code included in the first print of the game (or through the DLC disc from the recently released Cave Shooting Collection). You’re wrong if you think this represents an overload of Reco, the game’s protagonist bug princess. Every single game mode/submode offered in the package has its own set of rules, catering to all types of players due to an extensive variety in gameplay, difficulty and scoring techniques. The package follows the great publishing standards set by Mushihimesama Futari, however it lacks an option for the original low-res graphics of the arcade release. That’s why some people refer to it as Mushihimesama HD.

Since many people who’re new to the genre might get confused by all these modes (as I was once), allow me to briefly describe each one of them:

b. Novice: a watered down version of the main game aimed at beginners, with considerably easier patterns for all modes (Original, Maniac and Ultra).

c. Arrange: a special version loosely based on Maniac mode, with stock-clearing auto-bomb, selectable weapons, a fully powered character from the get go (with six lasers) and a new last boss; on the outside it looks like the same arrange mode found in the Playstation 2 version, but it actually isn't.

d. Version 1.5: a special edition released by Cave that contains all three modes (Original, Maniac and Ultra) and rearranges game colors, music, enemies and bullet patterns while elevating the intensity to extreme heights; furthermore, you can choose between regular and MAX power (maximum firepower on start and aggressive rank implemented in response to multiplier count, among other minor gameplay tweaks). 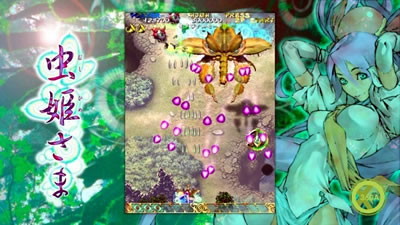 Having beaten Original on the Playstation 2, my aim this time around was to beat Maniac (Xbox 360 mode). Beating the game is one thing, now beating it with a higher score is something totally different. Pretty much apples and oranges, so to speak.

In Mushihimesama the player controls a beautiful princess called Reco. She rides a beetle and fights to stop the evil that has plagued her fantasy world. In all modes of the regular game you must select between three types of shot when starting a credit: M-power (green, medium spread, medium speed), W-power (red, wide spread, slower speed) or S-power (blue, concentrated shot, faster speed). Shot type can be changed in game, it’s just a matter of waiting until the power-up item cycles from the initially chosen type into the next one. A secondary item is an option that looks like a tiny bug and fires lasers – it’s possible to have up to four options in two arrangements: formation or trace, with items that also switch between each type after a brief while. Extra bombs appear every now and then, and if you do it right you can extract a 1UP from the bug's head prior to the fight against the third boss.

Basic inputs are labeled as A (regular shot, hold to focus lasers and reduce speed), B (bomb) and C (autofire), all of them configurable on the controller as you please. Scoring in Original is straightforwardly simple: collect all possible gems, destroy large enemies when more bullets are on screen and don’t lose lives because each one is worth 10 million at game completion. Maniac and Ultra, on the other hand, add so many details to scoring that at some point it just becomes too much. The main difference is the addition of a multiplier applied to every kill, shown on the top left of the screen. It grows as you keep hitting something and decreases fast when you’re not hitting anything, kinda like a less strict but more extreme version of chaining in a DoDonPachi title. Increasing the multiplier faster is loosely achieved by point-blanking enemies as they appear from the top of the screen and by landing your lasers on a stronger enemy, so the more you’re able to laser something continuously (a boss, for instance) the higher the multiplier gets. Dropping bombs, which can be directed with the directionals when deployed, reduces the multiplier by a certain amount.

Techniques to achieve even higher multipliers in Maniac/Ultra exist, but require intricate combinations of slow/mid/fast tapping of buttons A and C. Unless you want to do this by hand, this pretty much adds two new configurable buttons that experienced players refer to as A+ and C+, meaning “rapid shot” and “rapid auto”. When you consider the extra fact that different enemies respond to the same attacks in different ways, it’s clear that Maniac/Ultra modes can only be fully squeezed for score if you care to learn all these complex, non intuitive high level techniques.

Official trailer with glimpses of all game modes - no 1.5 footage though
(courtesy of developer and YouTube user cavecoltd)

As soon as I started enjoying Maniac mode I established my scoring goal at a minimum of 100 million points without fussing with extra button configurations. Once I achieved it I read about all the little things concerning scoring and fiddled around with the rapid settings for a while, then got back to not using them. The only tapping techniques I used were the most simple, such as the one on the second midboss: tap A (increase the child counters from lasers hitting the enemy) and rapidly tap C (cash in or "bank" the child counters into the overall multiplier when they're high enough). Slowly tapping A was also good to get higher multipliers on the giant bug heads of stage 3, and in general I held C while rapidly tapping A in order to damage bosses faster or achieve a mildly better multiplier increase rate.

There aren't many general tips on Mushi since all modes are so different from each other, but I think the most common thing is to not be stingy on bombs when you need to use them - especially in Original mode or if you're not going for all those ultra complex rapid fire things in Maniac or Ultra (there are no bonuses whatsoever for bomb stock in any game mode). Another important hint is the 1UP at the end of stage 3, where you need to destroy all ten bug legs to the sides before blasting his head at the center. Extends for Original are at 2,5 and 5 million, and for Maniac/Ultra at 10 and 25 million. With so much to be learned it's impossible to go deeper into any of the modes I didn't play extensively, but regarding arcade Maniac here's a good slice of knowledge if you want to get intimate with high score play.

Unfortunately Mushihimesama on the Xbox 360 is restricted to Japanese consoles only. Those who bought the limited edition of the game were given a CD with the arrange soundtrack, but in any incarnation available this is definitely a superlative title to own. It's got everything you need to configure any HD display you might want to get and eclipses the Playstation 2 version in its current generation. On the Xbox 360 menu, choose Score Attack if you want to register your score in the online leaderboards while playing at full defaults. Remember that all runs can be uploaded and saved after they're over. Head to Practice in order to do some proper training on all modes, except for Novice.

I absolutely love this game, and still remember the time when I thought Maniac mode was totally out of my league and skill level. It felt good to conquer the 1CC, but knowing that I can improve over my best result below feels even better (Score Attack, default difficulty 2, no rapid fire buttons were used). 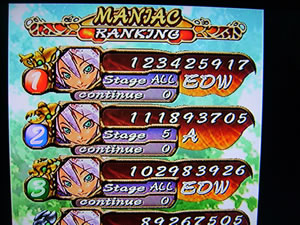