Soon after it was originally released, reactions to the independently-produced DUX led to a turmoil that exposed the worst sides from both the developer and the shmup community. Simply put, it was a scandal. Promised features as simple as looping and multiple difficulties were left out of the finished package, and the broken scoring system pretty much killed the game on the eyes of the hardcore fanbase. Hucast promised to distribute a patch disc that would take nearly four years to come out: at the time of this writing DUX 1.5 is about to be unleashed upon the STG world for yet another round of critical dissection. Up front the revision seems to hint at a different experience because of features such as “rebalanced gameplay” and “instant respawn”, and that’s what motivated me to dig out the critically butchered original and play it before we get to see what’s in store for the new version.

What’s so infuriating about DUX is the fact that the gorgeous artwork and the astonishing soundtrack are wasted in a game riddled with lackluster programming. Some of the most basic functions in any shmup are thwarted beyond belief. For example, you can’t refuse to continue once the credit is over (continues are forced). When the game is played on 50Hz PAL consoles there’s a bug in the first stage that allows your score to skyrocket, which combined to repeated 1UP collecting makes it possible to quickly roll over the score counter. As a 60Hz player I didn't get to experience this bug, but you can still milk checkpoints since all 1UPs in the game are there to be collected again every time you die. Broken scoring systems were pretty common amongst console games back in the 90s, but I’ve yet to find such atrocious errors in any of them.

So what’s left to enjoy from DUX?
Sadly for those who run it on PAL consoles the damage is more serious, but I'd say it's still playable for everybody else who doesn't care about endless checkpoint milking. 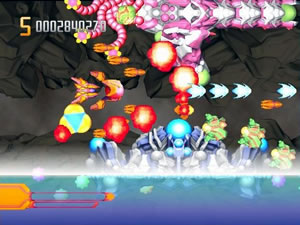 This is not a Halloween candy party!

As with many other games that came after 1987, DUX pays homage to the R-Type series. It’s got the force pod, three weapon types, a charge shot and missiles. The main difference is in difficulty (not nearly as hard as Irem’s classic) and in a deliberate sensory overload related to backgrounds and colors (reminiscent but not in the same level of NG:DEV.TEAM’s Last Hope). There's no mention at all to any story besides the brief description of each stage in the manual, but you seem to be waging war against an enemy that’s honed the ability to deploy huge laser beams everywhere. On the other hand, the enemy's defense system has weaknesses all around, as indicated by the large cores you need to target when facing bosses. In between mechanical creatures, deadly flowers, moving blocks and turrets of all shapes and sizes try to crush you into oblivion.

Basic inputs consist of shooting with button X and detaching/summoning the pod with button A. An additional function is used to soak bullets, activated with button R. Weapon types are determined by the color of the power-ups: hyper (yellow), bounce (faint green) and x-ray (blue). As soon as you take the first power-up the force pod arrives from the left side and docks to the front of the ship almost automatically, upgrading itself as you collect further weapon items. Besides granting the ship with weapons, the pod provides defense against regular bullets. However, unlike what happens in any R-Type, the pod can be destroyed if it gets in contact with specific enemies (rocketing organic domes in stage 2) or if it takes excessive damage (mostly when detached from the ship). There’s also an additional shield icon that adds small deflector barriers above and below the ship. Missile type is defined by the active arrows inside a cube-like icon: if the lit arrow is pointing forward you get forward missiles, if the lit arrows point up/down you get vertical missiles. Lastly, yellow stars activate checkpoints - that's where you get respawned when you die.

The “obvious energy” meter located below the charge gauge is filled automatically as you destroy enemies and block bullets with the pod. Certain enemies and crates release “obvious energy” bits that get sucked into the ship automatically and help fill the obvious energy meter a little faster. Activating the bullet-soaking function starts depleting this meter, and to sustain it you need to absorb bullets and keep killing enemies. According to the manual and the game’s attract mode, the soaking effect is the bane of the scoring system, in conjunction with killing enemies in succession with the charge shot. The problem with this scoring system is that you can’t keep track of how well you’re doing when “chaining”. There's no visible multiplier, no special counter, no timer at all, the closest thing you have to measure performance in this case is the obvious energy gauge itself. As long as you're able to keep soaking bullets you score higher, with the added bonus of invincibility (whenever bullet soaking is in effect you're invincible against soaked bullets, even if they approach from behind).

There are nice touches in the gameplay, such as the awesome homage to Xexex in stage 5, the glowing effect on the ship whenever you get too close to a wall/enemy (as if it's about to explode) or the fact that you're always respawned with a pod and the weapons you were using when you died. Unfortunately, the number of gameplay issues, from which the shady scoring system is just a single aspect, practically overshadows whatever pros you can find in DUX. For example, there's absolutely no need to dock the pod on the back of the ship throughout the whole game, and it doesn't take long to realize that the weapon system is an unbalanced one. Hyper (yellow) has the best charge shot but is useless otherwise because it's too weak, whereas using x-ray (blue) makes the game considerably easier, especially from stage 4 onwards. A global problem about the charge shot is that in order to use it you need to have a full charge meter (90% full is the same as nothing), and this limitation brings lots of problems in the heat of the battle.

Bullet-soaking? That's for the weak, I don't need it!
(courtesy of YouTube user masterdreamcaster)

Even with all the issues DUX is a mildly fun game. The difficulty slope seems to be inverted though, in that the two final stages are definitely a pushover when compared to the prior levels. Stage 6 has a totally white background, and given the nature of the scandals surrounding the game's release it's hard to judge if this design decision was made as a style choice or because the developers needed to rush the game out the door due to constant delays. Interesting related note: if you want to eliminate all backgrounds in the game go to the options and switch “visibility” to Perfect. Bam! There goes the background confusion! If you want you can also turn DUX into a TATE vertical shooter in the options (controls → horizontal/vertical). However, since the game was clearly designed as a hori it just feels unnatural to play it as a vert.

As the first title from NG:DEV.TEAM's spin-off company Hucast, DUX is ultimately a reasonable artistic effort spoiled by a series of immature programming problems. It's a beautiful promise turned into a corrupt product, still playable on the surface but disappointing in its core. The original game came in two variations: a single-disc package and a two-disc package with an extra CD containing the spectacular soundtrack. Here's my final 1CC score on default settings (moderate visibility on a horizontal screen): 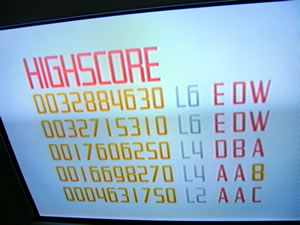 So what about DUX 1.5?
And the Kickstater-financed “sequel” REDUX - Dark Matters?
Will Hucast be able to make amends with the fans of the genre? Somehow I sense more controversy, but more on that in the near future!
Posted by Edward at 1:13 AM