Looking back now, in the 8-bit era it seems Nintendo didn’t really think rail shooters were tailored for the Western audience. With very few honorable exceptions, such as Tengen’s unlicensed take on After Burner, all notable titles in the subgenre never left in Japan (not even Space Harrier made it, but in this case I believe there were stronger forces in motion behind the curtains). Long story short, if you’re a rail shooter fan you’re in for a few treats if you dig deeper into the Famicom catalog. One of them is definitely Cosmic Epsilon, a remarkably decent example of how to do things right in the limited realm of 8-bit sprite scaling (please, please do not mistake this awesome game with Caltron's Cosmos Cop).

The first thing that caught my eye when I initially tested Cosmic Epsilon was how smooth the scaling effect for the ground is. In all honesty, impressive would be the correct word since it’s smoother than many 16-bit games, putting them to shame with little effort. Complemented by quick opening cinemas of the skull boss raiding a solitary planet and the robotic hero departing for battle, the game quickly establishes an excellent atmosphere. And even though the scaling isn’t as smooth when you consider moving targets or incoming bullets, the resulting impact on gameplay is definitely on the positive side. So buckle up and prepare for a great little adventure over the stranded surfaces of alien planets and into the confines of outer space. Planet Aria needs to be freed from evil and counts with your combat expertise. 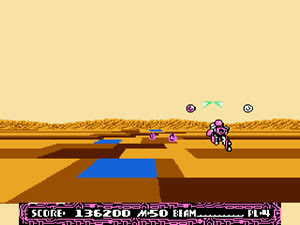 Sands of danger in planet Technos

As with most rail shooters, playing the game is dictated by very simple rules. Button B is used to fire laser beams and button A is used to fire missiles. Laser beams are replaced by a more powerful charge shot when you hold down and release the button, with charge power being tracked by the "beam" gauge. Missiles come with a mild homing ability and have limited ammo, which must be restocked by taking the M item. All items are taken from the ground after you kill the snake creature that carries them, and besides M there’s also S (invincibility) and X (extra life). When you fire a charged shot you must wait around one second to charge again or resume firing, otherwise you’ll be firing slow shots with no real purpose while the orbs that power the robot and the spaceship cool down.

Starting as a robot, as soon as you beat the first boss you transform into a spaceship in order to play the next level. Both forms alternate somehow across eight increasingly harder stages, with brief intermissions that show the spaceship landing in space stations or warping to a new planet. Short messages and a few sleek digitized voices help describe the journey, which is marked by the abovementioned great scaling effects, a few uneven graphics, cool bosses and fair challenge.

Cosmic Epsilon takes advantage of its excellent surface scaling during most of the game, but some spaceship levels unfold only with a static background. The action in these sections is conveyed only by the enemy gallery and the incoming obstacles. It works, but all other stages look much better because you’re always flying over some sort of surface whose color palette varies in an effort to represent water, desert, ice or fire. Stage 7 is the best-looking spaceship level precisely because it has several moving platforms. Usage of color is generally well done but some color choices are downright awful, such as the dark blue dusk of the 4th stage. The music there doesn’t help to lift the mood, in a soundtrack that’s not bad but at the same time doesn’t match the overall quality of the graphics.

Another reason why Cosmic Epsilon is a great 8-bit rail shooter is how it handles bullets and obstacles, thus correctly implementing challenge. With very few exceptions, enemy bullets travel at reasonably dodgeable speeds. Some of them are fired at point-blank distance unless you kill their sources first, others can be perfectly seen and dodged from afar. Certain enemies will fire very dangerous petal-like bullets or homing missiles, but these can all be anticipated and avoided with a little practice. Contrary to the majority of rail shmups there are enemies that don't shoot aimed bullets, so it’s easy to avoid them if you so wish. And since bullets are tied strictly to the type of enemy that comes at you, getting used to enemy behavior is the best advice to perform well in the game. However you also need to cope with environmental hazards such as fire arches, volcanoes, rocks, tornadoes and laser barriers.

Programming quality aside, it's true that some minor problems appear here and there due to limitations of the hardware and odd design decisions. Depending on where you are you will die because of bullets you don’t see due to the overlapping of your own hitbox and incoming enemies. Mysterious spinning forms can block your firepower temporarily if you fail to kill their carriers. Managing those large homing missiles is tough in the beginning, and in rare cases you will die because of an enemy that approaches from behind. The final corridor with the laser barriers is awesome but demands a good deal of memorization, while several passages require the player to prioritize enemies or things will quickly get out of hand. Note that all items are only released during the stages where you fly over surfaces, and a minimum alignment is needed for you to take them.

The absolute lack of continues might scare some people, but if you feel inclined to bypass this there's a little simple trick (upon gaming over, push SELECT + START, keep holding SELECT and press START when you get to the initial screen). Going further and further with each credit is made a little easier with the 1UPs (X) and the score-based extends granted at every 50.000 points. In a game like this every level completed without the loss of lives feels like a sweet victory, and soon enough you’ll be battling the awesome turtle monster of stage 6, my favorite boss. You need to hit his weak spot while dodging falling rocks and avoiding a brief bullet spam. Weak spots of bosses can be a little iffy, and are always best dealt with by using charge shots. In any case, I love how aiming is easily achievable because of the dual lasers meeting at a clearly visible vanishing point, and I just wonder how much cooler Cosmic Epsilon might be when played with the 3D glasses (toggle 3D mode with the SELECT button).

Taking note of the performance in the game is kinda tricky because it doesn’t buffer high scores. The final result after beating the final boss remains there for a few seconds, but pausing the game won't do any good because the act of pausing hides the score display... This means you’d better be quick to get your picture for a 1CC result. Going for a harder version of the game is made possible by a secret mode called "Another World", which changes the game's color palette slightly and comes with more bullets per enemy (input the following code at the start screen: ↑ ↓ ← → A ↓ ↑ ← → B). And below is my final 1CC score for Cosmic Epsilon in normal mode! 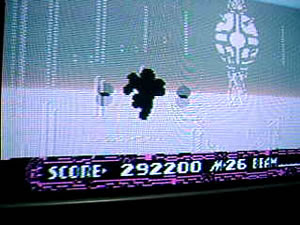