Having acquired the rights to work on porting Data East's arcade title, in 1991 Telenet graced the Mega Drive with an adaptation of Vapor Trail, a game that a friend of mine defined once as the Sonic Wings of the Sega Genesis. Yes, similarities exist in the way certain graphics are laid out and in the selection of different jets once you press start. Gameplay and vibe, however, are completely different - and these are the aspects that should essentially define preference. If we're talking 16-bit only, Vapor Trail loses to the Sonic Wings port available for the SNES. On the other hand, I believe the original Vapor Trail on the arcade *could* be a match for Sonic Wings (from the little I've played of it anyway).

Vapor Trail - Hyper Offence Formation has a pseudo-apocalyptic story as background to the action. In short, crazy terrorists have hacked the world’s communication systems and are threatening to nuke the planet unless they’re given total power over the globe. The player (or players, in co-op) must take control of one out of three jets in order to fight the enemy and restore world order. First in an unofficial trilogy that also includes Wolf Fang and Skull Fang, Vapor Trail on the Mega Drive presents itself as a standard vertical shooter that doesn’t really stand out from the rest of the crowd. Graphics and sound could be blamed for this, but when the gameplay isn’t engaging enough to make your shmupping heart tick it’s hard to lay all responsibility on the art/sound design alone - especially for a port that’s reasonably faithful to the source, as is the case here.

Note: the Japanese name for the game translates as something like “Sky/Air Fang - Operation Code Vapor Trail”. And there we have the Western title association with the other Fang shooters! 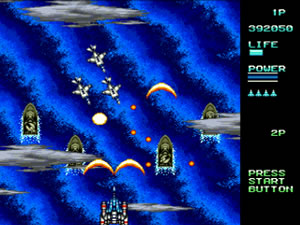 Silph jet equipped with the S-unit in stage 4

Much like in the arcade original, the intro describes the start of the story and tells that the city of New York is silent. When you start the credit you must choose between three jets that differ in speed and firepower: the Valkyrie is slow and powerful, the Silph delivers mid-range performance and the Seylen is the opposite of the Valkyrie. Their specific advantages are eventually evened out by the items you collect during the game, such as speed-ups (Spd) and power-ups (Pw). Power-ups are applied to the weapon you’re currently carrying: V (vulcan), M (guided missiles), B (cluster bombs) or D (spiralling shots). Shoot the weapon icon to change the letter and pick up the desired one. Button B and button A are used to shoot but B comes with autofire, whereas button C triggers the barrel roll, a special move that sends the jet spinning for a few seconds while making it invincible. To use the barrel roll again you must wait until it’s completely recharged. Contrary to popular belief, it doesn’t damage anything but you can still use your weapons while rolling.

Items are released by medium-sized slow jets or by killing certain enemies within a wave. Cluster bombs (B) and spiralling shots (D) have the same behavior for all jets, but vulcan (V) and guided missiles (M) develop in unique patterns for each one of them. That’s probably because they’re both the most useful weapons, getting more efficient when maxed out after taking 2 power-ups. All things considered, vulcan is my favorite for brute force and faster kills. The act of shooting the weapon item to get the letter you want can be a chore because the amount of hits it takes to cycle is extremely irregular. Sometimes it switches too quickly (V → B → M → D → V), sometimes it seems it won’t change no matter how much you shoot it. On top of that, weapon items are the only ones that block your firepower, and that becomes an annoyance if you’re trying to hit something behind them.

There’s a second layer to the weapon system described above, provided by the S-unit. This item creates an attachment on the jet, fitting it with a new weapon that overrides all others and is unique to each craft. The Valkyrie starts shooting a dual flame blast, the Silph gains a V-shaped wave shot and the Seylen gets a more powerful forward/backward pattern. The barrel roll input is replaced by a type of bomb that detonates the attachment in a big explosion and reverts the jet back to its normal form and weapons. As useful as the S-unit is, the player might incur in a slight confusion because it disguises which actual weapon you’re currently using (unless you’re constantly keeping track of the last weapon you took). Additionally, Silph's wave shot is the weakest of them all, but at the same time it's the only S weapon that comes with autofire. Valkyrie and Seylen were shafted with slow firing rates, which forces the player to mash the button unless he/she is equipped with a turbo controller.

An important aspect in Vapor Trail’s gameplay is the fact that each life has two health points (on Hard difficulty, raise them to three if we’re talking Easy). That means you can get hit once before dying, or even more if you’re able to refill the lost health by taking the “life” item. Unfortunately, the breathing room you get from this is practically nullified by a few harsh difficulty spikes here and there, such as the 3rd and the 5th bosses. At least you get respawned in the same place if you die there. Dying before reaching the boss sends you back to the start of the stage.

Even though the game shuffles its common enemies across the levels with certain proficiency, somehow it lacks the punch needed to make a lasting impression. Tanks, boats, helicopters, mechas, jets and planes invade the grounds in several ways, many of them in repetitive formations or as if they were just thrown into the screen against their will. A better sound design would’ve helped: many large foes go down without a single decent sound to dress the explosion, and the ones that do come with underwhelming effects to say the least. The music on the first level is pretty catchy, but soon enough you’ll be full of it because it gets repeated throughout the whole game. That’s right, there are only two BGMs in Vapor Trail, one for the stage and one for the boss battle. Scratchy digitized voices abound and even make you remember Gradius (destroy the core!). Particularly amusing are the “vapor trail” you hear whenever you pause the game and the “go for the kill” announcement when a boss is about to die.

Vapor Trail is mostly free of slowdown, but depending on which weapon/jet you’re using there might be a little bit of jerkiness (train stage). Every once in a while an extra parallax layer provides a little depth/ speed to the representation of mountains and sky backdrops. Every item collected adds points to the score, and since speed-ups don’t make the game unplayable score-chasers have free pass to take everything in their pursuit for higher scores. Other than that, just milk whatever you can from enemies that fire those small guided missiles. And if you want to take note of your end game result pause as soon as the final boss dies, you won’t have any other chance to see your score.

Here’s my 1CC result on Hard, playing with the Seylen jet: 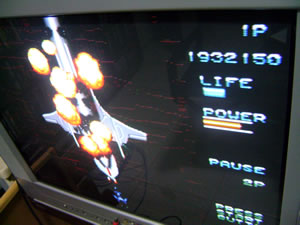