Sachen, a well-known Taiwanese spurter of cheaply made games (most of them for the NES), should really be hailed for their accomplishments. In a sense they were more succesful than many legitimate companies, since their games saw releases all around the world. Brought to the US by American Video Entertainment, one of their most faithful allies, Double Strike also made it to other shores, having been rebaptized as Twin Eagle in Australia - not to be confused with the licensed arcade port of Twin Eagle - Revenge Joe's Brother. No matter what the name is, you can't escape the fact that this game comes out as primitive as a barely improved Atari 2600 shooter.

Up front you notice there's something really outstanding about the craft you're flying. After all, it looks like a space shuttle! I can't even imagine the crazy technology that's behind this, but whatever firepower the space shuttle has must be enough to face one of the most vicious terrorist organizations on the planet, which has seized some of the most beautiful islands on Earth in a violent attempt at world domination. The "double" in the title is probably a hint at the fact that this game allows two people to play cooperatively, but you also get a double play demonstration during the attract mode (double play = one player controlling both crafts). As a curiosity, the start screen displays the subtitle Aerial Attack Force. 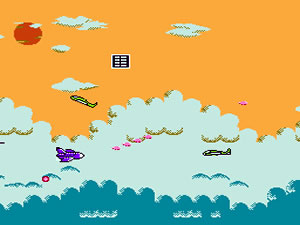 No pains, no gains

I admit cooperative/double play must have been quite a feature if you were coming from a previous gaming generation, or even during the NES heyday for that matter. But what about solo play? You do "strike" stages and bosses more than once, so I guess that counts as a double strike. But then again, if we were to see it this way the game's name should've been changed to Triple Strike. There are three levels with tiled backgrounds that repeat in different orders and with different color palettes, all with a very limited enemy gallery and almost no variation in attack patterns. The uninspired music is the same from start to finish, you can't see your score while you're playing and absolutely no effort was made at providing at least an ounce of excitement.

If you're still in the mood to get back in time and enjoy Double Strike for what it is, brace yourself for a very repetitive gaming session. Planes, tanks and helicopters approach in simplistic ways for what seems to be the longest time, then you enter the boss fight. Power-ups are released by red/pink enemies only and include double shot, triple shot, spread shot, temporary invincibility, ground bombs (D) and 1UPs. Button A fires the main weapon while button B starts dropping bombs as soon as you take the first D item. Abusing the bombs will deplete their ammo but you can't see when this will happen. Fortunately there's no outage of Ds for you to take, and that also happens with all other items. Though totally random, 1UPs start appearing more frequently when you're about to run out of lives. By the way, every credit starts with 6 of them (pause to see how many lives are left).

Picking up the spread shot is good for the levels themselves, but its low firing rate isn't really useful against bosses. Every stage theme has its own type of boss (sky → airplane; jungle → nazi castle; sea → battleship), and all bosses have many turrets that must be taken down one by one. The problem with boss fights is that some of the turrets appear at point-blank distance and start shooting at once, giving little to no room to react as the screen goes back and forth around the boss. By then bullet density is at its highest, that's why having one of the straight shots is best to destroy the closest turrets. If you do it right the battleship can be defeated before the screen retreats even once.

Besides the boring repetition, Double Strike is also irregular in the AI for enemy spawning. For example, the most dangerous enemy is a larger airplane that approaches from behind, parks at the middle of the screen and continuously shoots two bullets in a V-shaped pattern while moving up and down. As it overlaps its attacks with other minor threats the game almost acquires a minimum of intensity. Therefore, it's just sad that this only happens during the sky stage, meaning it will be absent from most of the game. The rest of the gameplay is reduced to staying sharp and avoiding to fly low in the sea/jungle levels. Well, at least collision detection isn't atrocious, if that counts for something. Several layers of parallax add a rather dynamic aspect to the backgrounds, too bad they are tiled and never change to something remotely engaging.

I'm done with Double Strike with the 1CC high score below. I used a turbo controller because going through the game without one would be stupid, maybe even more "stupid" than playing it in the first place. Truth is these subpar products had their importance in certain markets, and must have made many kids happy. If I had been exposed to it back then I would've probably liked it. 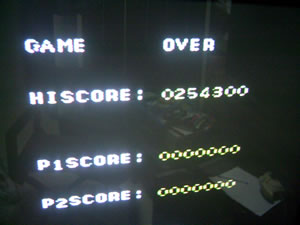