From the remains of what once was Seibu Kaihatsu and following the trail paved by Raiden IV comes Caladrius, MOSS’s first original and bold attempt at a shooting game. The bold part comes from it being a vertical shmup on a standard 4:3 screen ratio (a “vertizontal”), but judging from the game’s further release on arcades and the imminent revision set to grace the PS3 library my guess is that the game must have been a success for MOSS. By default, the extra space in widescreen TVs is used to emphasize the characters, thus giving a push to the game’s story initially presented in a reasonably pleasant animated intro. After a while I almost wished I could understand Japanese, if only to know the exact role of the character I chose to play with.

Gothic and horror elements unite as backdrop to a game where spaceships and bosses are controlled by people with magic powers. The overall tone is medieval, built upon dark shades and inhabited by a mix of fast-moving drones and behemoths with a nasty tendency to fill the screen with bullets. Yet the game isn’t really of the bullet hell type, most probably due to the Raiden heritage. Of course all sorts of bullet patterns are still in order, in this case matched by a finely balanced gameplay based on resource management. Survival and scoring approaches converge around mechanics inspired by old school classics, with a wee bit of fresh tinkering on weapon upgrades and bullet-cancelling. It’s a formula that demands some dedication to be appreciated, but the rewards are surely worth the investment. So don’t get fooled by the brief transition with poorly rendered mountains as the ship darts forward once the first few enemies appear. Caladrius offers no graphical fireworks for its generation, but it gets much better than that.

The more you grow familiar with the characters the more intricate the game becomes for each one of them. Default gameplay inputs consist of normal shot (A), bomb (RT), a "burst" attack (LT) and three "elemental" shots I hereby dub as E1 (X), E2 (Y) and E3 (B). E1 is the most character-specific type of attack, whereas E2 deploys a sort of static energy barrage that stays in place as you move around and E3 provides defense by nullifying most enemy bullets. All of these inputs can be used at any time, but the first catch is that the elemental shots have limited ammo. Check how firing one of them depletes its energy, and how it gets slowly refilled once you stop using it. If an elemental shot is depleted, using it will result in the normal shot while blocking its recovery. If they're all at above a 50% level hit LT to trigger the burst attack, a powerful bullet spray that consumes all their energy and lasts until one of the elemental gauges is depleted. Pressing two elemental shot buttons at once produces the same effect, and frankly this is the only real flaw of the gameplay because it's easy to accidentally do it and ruin a perfectly planned run.

I love the taste of ether chips in the morning

In a nutshell, the basic rule for scoring higher is simple: the more you kill using elemental shots the higher you score. Acquiring more upgrade points comes as a natural bonus, but the act of inflicting damage to more powerful enemies (e.g. bosses) with elemental attacks is also a very important factor for faster upgrades. Besides, the gold released by all destroyed enemies also comes in higher numbers when using elemental attacks. Speaking of which, there’s no need to get out of your way to collect gold since it’s always automatically vacuumed into the ship.

Using up elemental shots happens frequently, that’s a fact. Fortunately every stage (except the 4th) has strategically positioned hidden ground crystals that refill all elemental gauges. Hit their secret area to uncover a crystal and collect it before its color starts to fade (the longer you take to collect the crystal the less elemental energy you’ll recover). The location of the crystals is something the player needs to memorize, just like the selected enemies that release purple fragments. Whenever 9 of them are collected the fragment gauge resets and a 1UP descends slowly from the top of the screen. With 36 hidden fragments spread throughout the game, taking them all should add four extra lives to the starting three. On the other hand, extra bombs are obtained simply by scoring or by dying (every death gives you one). Bombs provide instant escape from danger and contribute little to the end-of-stage bonus, so use them whenever needed.

The last basic component of the scoring system of Caladrius is the dormant sol tower. Each stage (except the 4th) has one of these. Hover over the tower for two seconds and watch it rise. The amount of points you acquire by destroying them is random, ranging from 50.000 to 200.000 points. These towers are the first hint of MOSS paying a sweet homage to Namco’s classic Xevious, the other one can be seen in the indestructible spinning walls of the 4th stage.

Since their strengths and weaknesses balance out each other well it might be a little hard to have a character of choice in Caladrius. Each one is related to a specific element - Alex Martin (a tomboyish girl) controls fire, Kei Percival controls the wind and Maria-Therese Bloomfeld (a nun) is the master of the earth element. Maria's normal shot has a lot of spread, Kei fires a narrow straight shot and Alex stands in the middle of the spread range. Defensive elemental shots vary greatly in effectiveness: Alex’s spreads like wings at short-range only, while Kei’s projects forward as if it were an energy tongue. There are cases where the normal shot is fired alongside some elemental shots, making it naturally harder to get the desired kills to increase the multiplier (Alex’s and Maria's E2 and E3, Kei’s E2). Remember that the kill shot must be of the elemental kind, or else it won’t count as an addition to the multiplier.

Regardless of the chosen character, if you’re playing for score you’ll be constantly refining strategies, routes and elemental usage. Speed-killing bosses is another element of higher scoring because every time one of their forms is destroyed within a specific time frame (around 30 seconds) you get more gold and more points. It doesn’t matter how you do it (with normal shot, elemental shot, bombs, etc.), what matters is making a fast kill. When pulled off successfully you get a “cut-in” or “shame” break and a quick glance of the boss’s clothes being ripped off. Plus if you manage to no-miss the stage a sexually-charged still of the boss with torn clothes is shown at the bonus tally screen. It isn’t porn, so you don’t need to worry (much) about any stand-by audience. 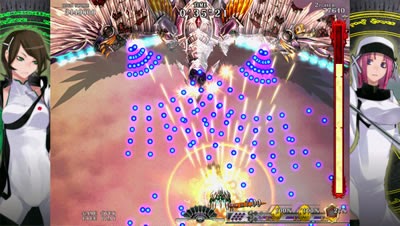 Maria uses her elemental attack (E3) against the 4th boss

As with all good score-based shooters, risk and reward dictate the feeling you get while learning the intricacies of Caladrius. The game does give you plenty of resources to deal with every enemy, but knowing when it's best to use or to refrain from using an elemental attack only comes with due practice. Bosses are a highlight in the graphical design, tossing all kinds of patterns while moving seamlessly in swift animations from one form to the next. Thank you, MOSS, that's the exact amount of cut scenes and animation I need to have in my shmup.

Game modes include Story (the proper game), Boss Rush and Score Attack (stage-based). For all of them you’re allowed to select the difficulty and to enable/disable dialogue intermissions and damage (bullets won’t harm you) prior to starting the credit. Boss Rush is extremely important for practicing but it’s locked by default, and the only way to unlock it is by 1CCing the game with any character (the tip is to play at any difficulty with NO DAMAGE set to ON). Once you've done it, clear the game again with the other characters (continues allowed) by starting the credit in the last stage to unlock hidden character Caladrius, a Phoenix-like entity (let it be known that in a regular game credit feeding won't allow players to see the 6th level). Unlocking Caladrius also allows you to tinker with the characters' powers by choosing whatever elemental shot you want for any of them, thus eliminating much of their inherent weaknesses.

Region-locked to Japanese Xbox 360 consoles, Caladrius was also released in a limited edition containing a soundtrack CD and an art booklet. An art gallery is included in the game as well. Unfortunately there's no functionality for replay saving, just offline and online leaderboards. Two extra characters can be downloaded through the Xbox Marketplace, as well as a rearranged soundtrack. I didn’t bother with neither (hopefully the extra characters will appear in the PS3 version). And the default soundtrack is great, perfectly matched to the graphics. I love the theme and the guitar riffs on the 3rd stage, and how the music often seems to be in synch with the action. By the way, the BGM for the last level reminded me of Giga Wing 2.

Kei Percival with default elemental powers was my chosen character (both Kei and Caladrius move slightly faster than the others). The table below shows my best result with him, 1CCing the game on Normal. 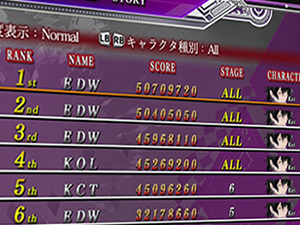