Already dead in arcades and survived only by dodgy compilations and controversial entries for the Playstations, in 2005 the Space Invaders series saw the beginning of a revival with two distinct titles released for the two mainstream handheld consoles. The Nintendo DS was granted with Space Invaders Revolution while the PSP received Space Invaders Evolution – as known in Europe, in Japan it came out as Space Invaders - Galaxy Beat and there was no release in the US. Throughout all the attempts made to modernize the concept of Space Invaders since it first hit the arcades, it’s fair to say that most of the time Taito was able to deliver the goods, if only for real fans of the series. Unfortunately, both Revolution and Evolution seem to have failed even among them, and the massive success of the subsequent Space Invaders Extreme certainly helped to sink them further into obscurity.

I can’t vouch for how Revolution plays (yet), but this last holiday I took a bunch of UMDs with me and gave a chance to Evolution. I guess coming out with a 1CC on my first try says a lot about it, at least on the challenge side of things. Surprisingly, the rhythm elements inserted in the gameplay aren’t to blame for why the game doesn’t live up to the standards of the series. The problem is that the rhythm-based ideas received too much emphasis, whereas most of the aspects that used to define a Space Invaders title were neglected or severely toned down. As such, Evolution ended up being more of an experience than the actual alien-shooting challenge most people know and love.

Inside the package there are actually four game modes. Classic is nothing more than the arcade original, pure and simple. Match-up is an interesting take on a Versus mode, where each player is supposed to hold one side of the PSP itself (the second player uses buttons as directionals). Future is the proper Space Invaders Evolution, and comes adorned by a cool animated intro to get the player in the mood for some rhythm shooting. An optional tutorial precedes the game itself, offering a brief look at how it plays and how the overhead dials and gauges work (it should be enough as a quick replacement for the instruction manual). The fourth game option is Wireless, which allows up to four people to compete while playing in Future mode.

Let’s take a look at the command inputs first. × is normal shot, □ is rapid shot, ○ is beat shot and ∆ is the charge breaker. Beat shot and charge breaker commands can only be used if you activate them in synch with the music, as shown by the first of the four gauges or the horizontal bar graph, which basically share the same function and show all four beats of the accompanying song. In order to use these attacks you must also have items in stock, whose number is displayed by the third gauge. “Items” are simply the number of destroyed invaders, there are no real items to be collected anywhere in the game.

Beat shots are more powerful shots that must be fired at the 2nd and 4th beats of the song. Trying to fire a beat shot at any other time only results in a beep sound. As its name implies, charge breakers are charge-based attacks: press ∆ during the 1st beat of the music tempo and release it on the 4th beat for a devastating explosion that destroys every nearby enemy and reaches beyond the farther invader lines. Besides marking the rhythm, the first dial also shows the power level of beat shot and charge breaker attacks, which gets automatically upgraded the more you use them. Notice, however, that each attack consumes the number of items related to the current power level (example: at level 7 triggering any of them takes away 7 items, as opposed to 1 when you start to play). Beat shots and charge breakers are the only attacks that can damage and destroy the UFOs that spawn new invaders while cruising the screen behind them. UFOs can be tracked down by means of the fourth dial, a small map showing their location in relation to your rotating position. Last but not least, the second gauge displays your current health.

Starting on Pluto, the player’s mission is to travel across the Solar System and reach Earth. Every “chapter” corresponds to a planet except for Saturn and Jupiter, each one spanning three levels. Keeping track of the rhythm is essential to play the game, otherwise you won’t be able to kill UFOs and advance to the next levels. Since the player moves around a closed perimeter, a stage can last forever if you’re just killing small invaders without targeting the UFOs. The surface over which you move isn’t always a cylinder, appearing later on with a handful of sharp turns. 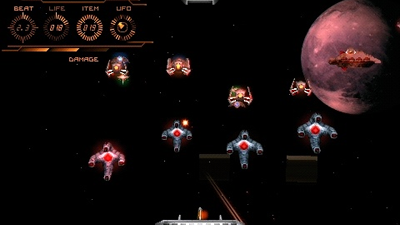 There's the UFO running away!

There’s a fleeting, genuine sense of fun once you nail down the rhythm aspect of Space Invaders Evolution. But alas, soon it gets replaced by boredom due to repetition and lack of real challenge, both derived from two factors. Firstly, the invaders do not descend upon the player, thus eliminating the pressure that frightens 10 out of 10 people who dare face the invaders since 1978. The invaders from Evolution are devoid of character and just stand there, moving up and down like sacrificial pawns as little blocks float and disappear in front of you. Secondly, whenever you’re energizing or firing the charge breaker you’re invincible (even though you’re frozen in place). After a while you realize that clearing a level is just a matter of (1) killing a few invaders to get a couple of items, (2) charge breaker-ing a bunch of them as you aim for the UFOs and (3) moving away as soon as the blast from the breaker attack wanes. Everything else becomes irrelevant, even for scoring. Clearing a stage within 3 minutes is worth 100.000 points, a huge bonus that gets reduced the longer you take to dispatch all UFOs. Taking a few hits is okay, you can take more than six hits before dying and restarting the level.

There are also other minor gripes with the game, such as the spaceship kinda disappearing off-screen at times or the map dial being too small and confusing when there are too many UFOs to kill. With the exception of songs with faster tempo and the higher amount of shots fired by the invaders, there’s no real change to the basic gameplay in later stages. UFOs always move from left to right only. Sometimes faster, as if they’re speeding away from something. When you complete a level an animated sequence shows the departure of the ship to the next planet, and once the game is beaten you’re presented with a nice performance report for each stage. Then the second loop starts with slightly more aggressive invaders and UFOs responding to any damage with the main attack from mother UFO, the final boss in the 13th and final chapter.

Since rhythm is such a considerable part of the package, how does the music fare in Space Invaders Evolution? Well, I'd say it's decent. Most of it is in the line of electronica/techno, but the rockabilly that takes over during the last levels is a little overused. Three game views can be switched with buttons R and L: a slightly bent orientation that's closer to a normal vertical screen and two tilted planes. I usually played on the default tilted view, the other one is too aggressive with its behind-the-cannon perspective.

The results of two full credits on Normal difficulty are shown in the picture below. The highest score ended at stage 2-10.