Even with so many games released for it I could never fathom the appeal of the Wonder Boy series. My only previous contact with it was on the Master System as I was very little, and I don’t even remember which game it was. Initially presented in the arcades as a pure platformer, the series soon incorporated other styles of gameplay, and as the shmup representative in this hybrid history Wonder Boy III - Monster Lair mixes platform sections with standard horizontal shooting. This game also bears the distinction of being the last arcade entry in the Wonder Boy series and the only chapter to allow 2-player simultaneous play. Player one controls a boy named Leo and player two controls a princess named Papillo.

The best option for those who want to know this universe better is volume 29 of the Sega Ages 2500 series for the Playstation 2, titled Monster World Complete Collection. It contains every single chapter and all their official variations, with the exception of the PC Engine port for Wonder Boy III - Monster Lair (which is understandable because it wasn’t handled by Sega).

Getting in the mood to play the arcade version of Wonder Boy III doesn’t require much if you’re fond of lighthearted 16-bit graphics. Everything is very bright and colorful, with a fluffy atmosphere that immediately evokes feelings of easygoing and joyous fun. But wait... Why then did I spend so much time with the game, and a good portion of it swearing at the TV screen as I got shafted over and over by cute representations of vultures and snowmen? Laugh at the cheesy graphics and mock me as you will, but to me Wonder Boy III is absolutely no piece of cake. It offers one of the most evil kinds of challenge you can have in a game, where failure is served on a plate with a happy face staring back at you (Twinkle Star Sprites, I haven’t forgotten thee). 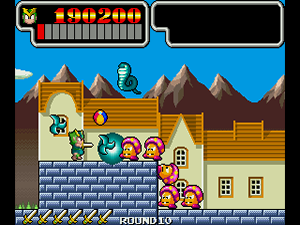 Beach balls in the village!

Each one of the 14 stages/rounds in Wonder Boy III - Monster Lair has two parts. The first one is a platforming area with automatic scrolling (it scrolls even faster if you advance to the right side of the screen), and the second one has the character flying a pet dragon in order to face the stage boss in his “lair”. Themes vary throughout and include the typical tropical settings of previous Wonder Boy games as well as jungle, castle, villages, ice, desert and spaceship (last level only). There are no graphic frills whatsoever, it’s just the foreground and a layer of parallax in the background. Because the game is so long some of them get repeated after a while, and the same happens to the music. The enemy gallery consists of several sorts of animals, plants and weird creatures, all rendered with cute or goofy sprites. Bosses are quite amusing and remind me of Fantasy Zone, seeing that they’re generally large and shift from their natural colors to red as you hit them.

For the platform areas controls consist of jumping and shooting (configurable as you wish), with shot types switched by collecting weapon icons left by enemies. All six weapons are active for 10 seconds only and revert back to the default pea shot after a while: spread rings, two-way rocks, drill shot, exploding missiles, rotating shurikens and expanding fire circle. Weapon behavior is the same during the shmup section, but there are a few rules that should be noted if you want to stay alive in both parts of a level. For instance, it’s very important to collect the fruits/vegetables that appear hanging in the air during the platform areas, since they serve as fuel for the vitality gauge that determines your current life. This gauge is constantly drained while platforming and can only be replenished by taking fruits or weapon items. A life is lost either when it gets depleted or when you get touched by an enemy. With very few exceptions, all enemies in Wonder Boy III fire this single colored beach ball that takes away a small amount of health instead of killing you instantly. Even though avoiding/dodging beach balls is hardly needed when platforming, balls cause the character to trip uncontrollably into whatever lies ahead. That’s probably the main cause of death in this game, besides getting rammed by one of those cute creatures and falling into abysses due to poorly timed jumps.

Extracting more energy and more points from fruits is possible by hitting the ones that recognize hits and grow to explode into four fruits of the same kind (apples, lemons and pears). Another way to increase their energy and point value is by freeing and collecting the pink fairy. She shows up floating inside a bubble, moving three times in a wide open arch before fleeing. Once touched she will cast a spell on the character and turn all subsequent fruits into cakes for a brief while. Not only do cakes fill up the energy gauge faster, but they also give you more points than normal. Watch out for the blue fairy as well because she grants a very welcome invincibility window that can be used to get through lots of delicate parts without getting hit. Lastly, the black fairy is evil and should be avoided. Don’t fret if you get touched by it though, all it does is void whatever weapon you’re carrying at the moment.

What makes Wonder Boy III a tough challenge despite the childish looks is the autoscrolling nature of the platforming parts. It adds an extra layer of pressure that requires instant adaptation to enemies and weapons. Even when you have the stage fully figured out you can still die because of an inappropriate weapon or because a juicy fruit lured you into falling onto the enemy’s lap. Patience is key, but the more you know how to deal with weapons the more prepared you are to evade the traps set by the game. It’s possible, for instance, to enable a different shot button with autofire. The trick (or hindrance, depends on your point of view) is that some of the weapons behave differently with autofire. The default pea shot and the rotating shurikens will have very short reach due to their increased rate of fire, but the good news is that they are devastating at close range. Exploding rockets have a very specific behavior because they normally blow up at close range if you use either the regular or autofire buttons. However, if you just hold the regular shot they will travel the whole length of the screen.

The shooting sections of the game are as straightforward as they get. You have to kill waves of a particular enemy before fighting the boss, both thematically related to the stage itself. These are the bosses, in stage order: a fish, a snake, a bat, a queen bee, a skull, a dodgeball match against a puppet, an ice gorilla, a cactus, a vampire, a mushroom mutated into a slot machine, a crab, an ogre, a knight with detachable hand and a space dragon. They’re mostly very large, and in my opinion the hardest ones are that awful cactus and the knight of stage 13. As for regular enemies, the most aggressive are the waves of mushrooms and snowmen. By far the best weapon against bosses is the exploding rocket, which can take some of them out in seconds. Just avoid taking the rotating shurikens unless you’re about to fight a boss where it’s undoubtedly useful, which in my case are the snake from stage 2 and the bat from stage 3. Hint: stay low and do not shoot while approaching the skull in stage 5 or you’ll die instantly (I actually don’t know if this is a bug or not).

Part of what makes up the scoring system of Wonder Boy III was already mentioned above (expanding fruits and cakes from the pink fairy). The other main source of points is in boss fights: a no-hit kill with a full vitality meter results in a full bonus of 5.600 points. That’s also good for survival because the remaining energy at the end of the level is always transported to the next stage (remember that when you die you’re respawned with only half the meter full). Finally, every single item is also worth some points, so the more you collect them the more you score. Speaking of which, collecting successive weapons of the same type extends its duration for a good amount of time. That’s very useful if you happen to come across multiple exploding rockets before the boss, for example.

If by any chance you decide to play this game be prepared for the huge difficulty leap that comes in stage 8. Everything in that level was designed to eat away our lives in a snap: cactuses explode into one or three beach balls, waves of vultures ram into your position at random, scorpions take lots of hits to die and snakes can only be killed if you carry certain weapons. On top of that, that cactus boss is totally unpredictable. In my worst credits I lost all my hard earned lives there, including the four extends gained with 50, 100, 180 and 300 thousand points. The rest of the later half of the game comes with trickier platforming hazards, such as exploding mushrooms and higher cliffs that must be “climbed” by hanging on to their tips (hold and release the jump button for better results).

At the time of its release the game was soon ported to the Mega Drive (in Japan only) and the PC Engine (Japan and US). Available options for the arcade version of Wonder Boy III - Monster Lair on the Playstation 2 include total customization of inputs and settings, gallery/library modes with lots of original material on the game, options to record/view replays and a handful of display settings. There's also a save function that must be done manually, with automatic loading while booting the disc. The arcade original is fun as a whole but also extremely punishing, and that’s why I feel I didn’t enjoy it as much as I had expected. Plus the weapon system randomly screwing the player doesn’t help at all in its appreciation. In my 1CC run on Normal I started the 13th level already on my last life, so I’m very proud of having played the rest of the game without dying... Those last levels are full of traps and that knight boss hates me! 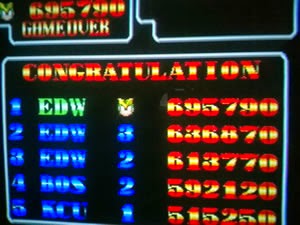