If I was an SNES fan back in 1991 I would’ve wet my pants if I knew Thunder Force III was going to be released for the console. Fanboyism aside, I’d probably be aware of how awesome a shooter it was. A copyright issue concerning Sega and Technosoft led to the change in the game’s name, but this could also be related to the fact that Thunder Spirits is more an adaptation of the arcade port Thunder Force AC than Thunder Force III. I use to joke about this making it a second generation port, however there is absolutely no excuse as to why it resulted in such a disappointment, especially for those who had already been exposed to the wonders of Thunder Force III.

There’s no other way to put it, Thunder Spirits is the poor cousin and the black sheep in the mainstream Thunder Force family (meaning the part that doesn’t include the obscure first chapter). Thunder Spirits is also largely used by Sega fanboys who love to jest at the lower speed of the SNES processor. Looking at it bluntly one can’t help but agree with the derogatory statements, since the game seems to run in permanent slowdown whenever you’re shooting. I for one would blame Seika and Toshiba because there’s absolutely no explicit reason to have such a degraded adaptation on a 16-bit console that has grade-A stuff like Axelay, Macross and R-Type III. The SNES was perfectly capable to handle the port better.

That said, this game isn’t a total waste. It’s kinda like Raiden Trad, but a little better. You can’t really trash the influence of an excellent source, can you?

The first thing you need to do in Thunder Spirits is to press SELECT + START at the start screen in order to toggle autofire on. Then you’re all set to enjoy eight stages of horizontal shooting fun modeled after Thunder Force AC, as initially indicated by the status bar positioned in the lower portion of the image. By default the controls work with A (fire), L (change speed) and R (select weapon), but you’re allowed to remap buttons at will at the options screen mentioned above. Everything about the gameplay remains the same: starting with two default weapons (twin shot and back-fire), win enhancements or other weapons by collecting their icons (red S, B, F, W and H); get the claw item to gain two rotating options that amplify firepower and provide protection against normal bullets; find the blue S item and get a 3-hit shield; find and grab 1UPs to increase both the life stock and the final bonus upon completing the game. Die and lose the weapon you're currently carrying, except for the default ones.

While there’s nothing blatantly wrong with how it plays, Thunder Spirits lacks the flair that made Thunder Force III a great experience. Graphics are fine throughout but voices now look like something out of a Parodius game. After you get the claw item slowdown kicks in because the game simply cannot handle the amount of on-screen action. The overall consequence is that at default conditions Thunder Spirits in even easier than Thunder Force III. Never mind bumping the difficulty to mania (very hard) because the challenge increase is pretty minimal and the rewards are the same in the end (there is no additional score bonus for playing in a higher difficulty setting). Extends are aplenty and come with 100.000 points and then for every 200.000 points afterwards.

Another aspect that brings Thunder Spirits down a bit is the lower tempo and the general subdued nature of the soundtrack – as opposed to the stronger emphasis easily noticed on sound effects, especially for the ship’s weapons. By the way, these have gone through minor changes in order to make them more powerful than before. For example, either enemies have gotten weaker or the efficiency of the fire and hunter weapons has been enhanced a good deal (besides them being slightly beefed up graphically). And note how most bosses won’t put up any decent fight. Poor Gargoyle doesn’t even have a chance to shoot his fireballs if you hit his weak spot with the lasers as he enters the screen. King Fish, one of the most feared opponents in previous incarnations, is left in severe disadvantage due to the massive slowdown. 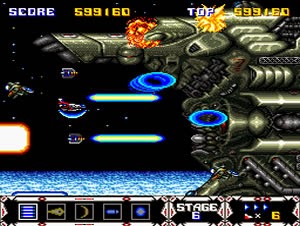 If we plot a straight line starting in Thunder Force III and ending in Thunder Spirits to compare both titles, practically half the game is somewhat altered. Again, most changes derive directly from the treatment applied in Thunder Force AC, such as the player not being able to select the starting stages anymore, the new outer space level that replaces ice planet Ellis and the new level inspired by one of the stages from Thunder Force II, which replaces the caves from Haides. Exclusive to the SNES iteration are the reworked spaceship stage (plus a brand-new boss) and the additional stretch before the fight against a dumbed-down final boss. Having now played all of these versions, I honestly think that the original Ellis and Haides planets from Thunder Force III are the best-looking of them all and shouldn’t have been excluded.

In short, if you fancy an easygoing shooter on your Super Nintendo and you haven’t been exposed to Thunder Force III on the Mega Drive yet, Thunder Spirits will fit the bill. It’s not atrocious and it’s fun while it lasts. I just recommend trying the original game next so you’ll have an idea of how much cooler it is in comparison.

By beating Thunder Spirits you unlock special lines in the options screen, which allow you to listen to the game's soundtrack and tinker with the starting number of lives and the extend routine. I played at full defaults on Normal with autofire and cleared the game on one life. Each life left in the end is worth 1 million points regardless of the chosen difficulty. 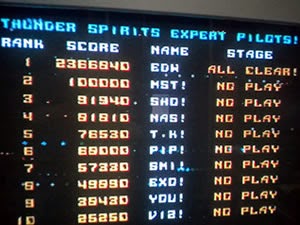