Long before Astro Boy the movie came out the sympathetic character created by Ozamu Tezuka was already very famous in several media channels, from mangas to video games. However, it struck me as unexpected when I knew the video game based off the movie directed by David Bowers was actually a shmup hybrid that mixed horizontal shooting with platforming elements in a story closely based on the movie itself. The idea of having Astro Boy taking to the skies and dodging bullets is quite amusing, too bad the actual execution isn’t really that exciting in the end.

Details about the story can’t be disclosed without incurring in movie spoilers, but suffice it to say that a robot built after the image of a deceased kid discovers his role in the futuristic world of Metro City, which is populated by other robots controlled by evil human rulers. In the main game mode (Story) simple cut scenes with proper voice acting help flesh out the adventure while the player gets through several platform and shooter segments. Astro Boy’s life consists of a single energy bar, which when depleted sends him back to the last checkpoint reached. As with most action games released from the 32-bit era on, “lives” are unlimited and the player never sees any game over screen, so I took to myself the challenge of beating Astro Boy - The Video Game on Normal without ever emptying the energy bar or quitting the level to restart it.

I concede that the process of learning the game was fun as far as platforming goes: dealing with enemies and obstacles, managing special attacks and looking for the hidden power-ups. Shmup sections, however, are overly bland, boring and too easy when compared to the rest of the game.


4-1. Fight along the tracks
(courtesy of YouTube user Malcolm Anthony)

Remapping buttons is possible, but I found the default controller setting perfect. For platforming the commands are punch (□), jump (×) and all special moves in the shoulder buttons: butt-machine guns (L1), arm cannon (R1), drill attack (R2) and absorb (L2). During the flying sections punch = shot and jump = dash, with special moves unaltered. Many advanced staples of the platforming genre are in place, such as punch resulting in different moves depending on the used directional (↓+ punch = powerful kick; ↑ + punch = finger laser, also possible while jumping), grab/throw (use punch close to a stun/fallen enemy), air dash, wall-crawling by double-jumping, wall-sliding when falling (falling from too high will make Astro Boy take longer to get back on his knees) and crouch-sliding (↓ + jump). The wise combination of all these moves and powers, along with a few gameplay details, can make or break the player who decides to put him/herself in Astro Boy’s shoes.

As you get through the first levels the game will subtly help you with all basic moves. It does not take players by the hand though. Powering up is accomplished by finding hidden items that enhance the boy’s abilities separately in four categories: power, laser, health and jets. Power is self-explanatory, laser is the same but applied to all laser attacks, health improves his resistance and jets relates to the number of air dashes you’re allowed to perform (each upgrade increases the limit by one dash). Pause the game if you want to know how you stand in the upgrade process or if the level has any of these hidden items to be found. Just remember that the screen does not scroll back at all, which can lead to upgrades being unreachable if you get past them. Other types of hidden items, qualified as cheats and denoted by the interrogation symbol, can also be found, but these offer unnatural tweaks that must be toggled to become active. I never cared about them in a regular run.

Coming to grips with the basic moves is essential, but the correct use of the special attacks is even more important in certain cases. Their use is limited to the special attack meter, which starts every level with 10 attacks in reserve and gets constantly refilled by the energy bits retrieved from enemies getting damaged. The best special attack by far is the butt-machine gun because it nullifies all on-screen bullets and knocks down all enemies (it’s pretty much a panic device). The arm cannon is extremely powerful but interruptible if Astro gets hit, whereas he’s invincible when performing the drill attack. Absorb recovers a little of his lost energy, but try to do it when there are enemy projectiles on screen: they’re all converted into Astro’s blue energy and can completely refill an almost empty energy bar.

As I mentioned above, the flying parts of Astro Boy aren’t nearly as engaging as the action segments. He flies against scrolling backgrounds that offer no interaction at all while dodging invincible mines and facing the occasional powerful enemy in between lots of cannon fodder. On Normal difficulty all you need to do is spam special attacks since Astro can take lots of hits. To keep a constant regular laser stream all you need to do is slowly tap the fire button, after all each press activates the finger laser for approximately two seconds. 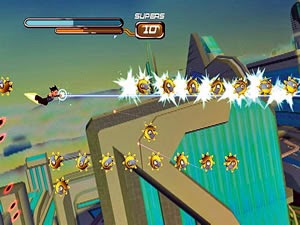 Astro takes to the sky

Although it’s fair to say that platforming and shmupping share the same amount of gameplay, platformer fans will be much better served in Astro Boy simply because there’s much more to explore when jumping and kicking robots asses. Each stage is divided in several sections and carries a distinct atmosphere that showcases the evolution of the character as he approaches the final battle against the “Peacekeeper”. Graphics and music get the job done nicely except for the cut scenes, with light humor, voices and good sound effects are all over the place. Bosses appear sporadically, so the bulk of the enemy gallery consists of robots of all sizes, drones, turrets, fat bots complaining about “too much gravity”, skeleton-like rejects, dancing pompadour-haired robots, mechanic beetles and even a little background interaction with bosses in a few areas.

Those who dread deadly pits like in Mega Man should not worry because if Astro Boy disappears in one of them he’ll just rocket back at the cost of a little health. That's one of the hints that show how easy the game gets after a few tries, the main one being the fact that energy and special attack stock are fully restored in every section you play. One-hit kills do exist though, caused by a few hydraulic presses that appear in later levels (use special powers in the air!). Upgrades are always located in the same kinds of places: vertical shafts, close to falling platforms or behind false walls. Strangely enough, the first power upgrade in the very first area does not appear unless you replay it. While attempting a 1CC run it's advisable to quit soon afterwards and restart the game so you won't miss out on a very important upgrade.

One of the problems of Astro boy is that, from an arcade design point of view, dealing with regular enemies gets tiresome after a while despite the attempts at infusing a little diversity in the gameplay (chase levels where you’re pursued by a giant drill or a large robot, wind resistance, quick riddles, among others). A complete run can take almost two straight hours, even when skipping all cut scenes from start to finish. Three save slots allow players to keep track of different play sessions. Unfortunately the main game mode (Story) has no scoring system. Scoring is only implemented for the "ground" and "sky" variations of Arena mode, a score attack option where you must defeat 20 consecutive enemy waves. By choosing higher difficulties the game gets considerably tougher, with deaths happening from only one or two enemy blows and special attacks limited to 3 on the Hero setting (Very Hard). Co-op play is available on all modes.

This same version of Astro Boy - The Video Game was also released for the PSP and the Nintendo Wii. The Nintendo DS game was handled by a different developer as is just a strict platformer. 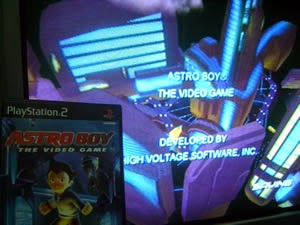