Following the first wave of arcade shooters with continuous, neverending play and just a little before enemy bullets started to overpower most gamers in titles that had an ending, Taito’s Insector X dared to offer a very odd and easygoing experience, a cute adventure of sorts that wowed arcadegoers at the time but unfortunately hasn’t aged well at all. However, if we go down a bit in the hardware scale we will find that the console ports fared a little better. Take the Famicom version, for example. Not only is it a reasonably faithful conversion, but in most terms it fits and uses the 8-bit format more competently than the arcade original.

Like many other cases of games that never left Japan, the Famicom version of Insector X surely had the potential to be a hit. As far as arcade ports go it’s actually a more accurate rendition than the Mega Drive version, even though that doesn’t mean it’s the better game since the Mega Drive cartridge completely revamps the original design in a more serious approach. The only aspect that undoubtedly comes out as half assed in the Famicom/NES is the sound, which cannot uniformly handle music and effects. It seems all efforts went to graphics and character animation. Slowdown is completely absent but there's plenty of flicker, although of the non-intrusive type. 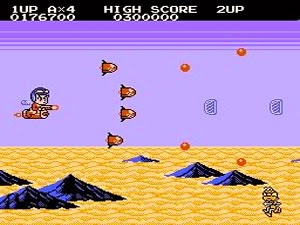 Insects taking over the world

This game has a remarkable childish feel for its seemingly fantastic theme. You fly as a boy (Anny) or a girl (Myu) across five levels battling all sorts of insects and jungle creatures. The larger ones, such as bosses, are designed with even goofier sprites. Most levels have more than one section prior to the boss, starting with an Egyptian landscape and progressing to a garden, a city, a forest and a bee hive, both in outside and inside environments. Obstacles and walls are harmless but can kill the player by crush-scrolling, sending you to a previous checkpoint at default conditions. Firepower is only preserved if you have been able to find and collect the large X item, which works as a weapon retainer upon death.

All items appear from medium-sized enemies you’re able to kill, and besides the abovementioned X they also consist of S (speed-up), P (power-up), PP (double power-up), A (autofire), honey drop (3.000 points), an energy sphere that cycles colors (secondary weapon power-up) and 1UP (extra life). Button B fires the main gun and button A fires the secondary weapon, provided you have taken at least one energy sphere to create a spraying can for the character to ride on. The color of the sphere defines the type of spray you’ll be using: blue grants the player with a ground bomb type, whereas orange adds a forward shot that expands in power and coverage as you take further spray cans. The second form of the orange spray is unique because it acts as an opposite-aiming three-way shot.

It takes six power-ups to max out the main gun and four energy spheres to max out the secondary weapon. A maxed out arsenal leaves the character considerably overpowered, which turns the game into a cakewalk and subjects the player to deaths due to silly oversights only, such as staying put as the insects in later stages approach (they will always fire at least one bullet upon death) or getting crushed by the scenery (mostly in the hive stage). Just like in the arcade original, the autofire item is a neat addition for those who don’t use a turbo controller, and luckily there’s at least one of them per stage to ease the useless stress of button mashing.

The way Taito animates both the boy and the girl characters in this version of Insector X is awesome, thanks in part to their big hitboxes. Whenever they stop shooting you can see them blinking, but once our heroes fire their main weapons you can easily notice from their faces how resolute they are in their mission to take down those nasty bugs. Exclusive to this version, all bosses are shown totally wrecked and in bandages after you defeat them, with the ending altered to show Anny and Myu escorting the last boss against a pale sunset of freedom. Never mind the fact that the final boss was completely changed to a mad scientist. Or that the boy was given a feminine name (at least around here Anny is used solely for girls).

Now for a little controversy: the gameplay described above applies 100% to Anny the boy, but not Myu the girl. By choosing to play with her you get a powered up weapon by default, plus autofire from the start. Would that be a way to say women are more fragile and less capable to succeed in a video game? What's really weird is that she can sacrifice one life to defeat a boss just by touching it (with the exception of the very last boss). I'd say Myu is targeted at children learning how to play a shmup, but choosing different characters does incur in serious unbalance when playing the alternating 2-player mode. It doesn't matter which one you choose in the end though, since with just a little practice anyone can beat this game.

In the array of difficulties available in the options of Insector X, "Special" refers to a mode with no power-ups or weapon upgrades at all. The only item you'll ever come across in this mode is the speed-up, and that definitely offsets the tame challenge of the Normal difficulty to something more substantial. The game loops after the final credits are shown, but unfortunately from my experience on Normal mode there is no increase in difficulty at all. Therefore the tendency is to pile up extra lives with 1UPs and the score-based extends (100K and at every 200K afterwards) as you continue playing forever. The picture below was taken as I gave up the credit at the start of loop 4 on Normal with Anny (in a weird twist, you are asked to input your initials every time you beat a loop). 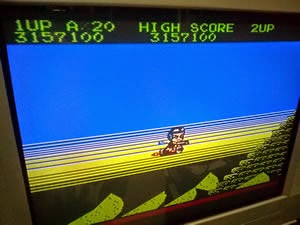