I have always been a big fan of horror and science fiction in movies, especially some of those that bear the infamous “cult” status. After having played Zombie Nation I asked myself if there’s such a thing as cult video games as well, just like in the movie world. If that’s the case then this game surely deserves to be inducted in the hall of fame of cult shmups alongside oddballs like Toilet Kids, Ai Cho Aniki or Poopocalypse, all of them clear winners in the bizarre-o-meter scale. If you’re still curious about what Zombie Nation has to offer, imagine yourself playing as a floating samurai head tearing down a whole zombified country in order to rid it from the clutches of an alien invader. Bear in mind that this amazing story originally takes place in the future, most precisely 1999.

Regardless of this zombie head adventure in 8-bit gaming, North Americans can all rejoice since it’s way past 1999 and the living dead apocalypse prophecyzed by developer Meldac obviously never happened. However, an actual collector’s apocalypse is occurring right now in the market for old school video games, given the ridiculously inflated prices Zombie Nation commands these days. I understand the US box contains a unique piece of art with its clay rendition of cute zombies, but the way old games are being valued these days is just ridiculous. I’m glad I secured my copy years ago, but I can’t help but feel sorry for my fellow collectors in this day and age.

Weirdness isn’t reserved for the game concept alone, for the actual gameplay is also very strange for several reasons. Spit and vomit, for example. That’s what the floating head shoots, and apparently that’s what’s needed to cleanse the zombified USA. If you play on the Hard difficulty setting our elusive floating head also seems to be drunk, seeing that the player needs to cope with an annoying amount of inertia when moving him around. Inertia is also mildly present in the Easy setting, but it's practically insignificant. 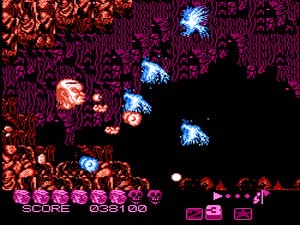 There is only a single life bar gauged by eight heads that turn into skulls as you lose energy, and if this life bar is gone it’s GAME OVER. In its essence that’s not really a bad thing, but Zombie Nation is notorious for having enemies and hazards that impose 1-hit kills or knock your health down to a near-death condition. You're able to withstand a good deal of normal shots and collisions, but touching bosses or getting hit by their projectiles means instant death (even though you can still survive such contacts in rare occasions), as well as being crushed by an obstacle as the screen scrolls. Pulsing paths of electricity/lightning or puffs of toxic smoke are responsible for chipping health down the last head, changing the music to a dramatically sinister tone that plays until you start recovering.

The main objective of the game is to destroy whatever lies ahead, including buildings, mountains and the insides of dark caves. Resistance is tough since the alien invader has also taken control of airplanes, tanks, rockets and military bases. Living beings such as humans, snakes, birds and fish were all zombified for great injustice, so prepare to also deal with them throughout four stages, the first of which must be chosen along with the difficulty setting (toggled with SELECT) as you start the game. Subsequent levels will be played in order before you finally face the alien boss in the fifth and final stage. Levels 1 to 3 have two sections and a boss, whereas in level 4 you only play a single stretch prior to the boss fight.

Every once in a while a human will be expelled from the debris of the destroyed scenery. Take him as he screams to his death and watch as the running stick figure in the HUD shifts right. Once five falling zombie men have been collected the firepower is upgraded, which is indicated by the numbers 2, 3 and the star. 3 corresponds to max power (more spits and vomits), and the star is a single smart bomb that can be deployed with button A (button B is used to shoot, by the way). One should always aim at achieving full power as fast as possible, simply because the game gets a lot more manageable and no matter how beaten up you get there’s no downgrade at all. In order to recover the lost energy you need to score points: some of the dead heads will come back to life whenever your score passes by the ten thousands mark.

Playing Zombie Nation is an interesting experience if you’re just poking around for fun. The animation for the flying head is neat (if you stop shooting it will lean on its side and blink), while the amount of on-screen destruction gives a singular sense of satisfaction that’s quite rare for an NES shooter - if only for a little while. Amidst the chaos you’ll definitely hear the screaming death of the character an awful lot, at least until you start playing the game seriously. The fact that the energy display disappears during boss fights bugged me a little, but since most of them are battles of 1-hit deaths soon I stopped caring. By the time the stupid 1-hit deaths start to scare most people away, serious players will need to rely on the limited continues to proceed and practice. Thankfully the game is on the short side and shouldn’t stress (much) anyone who’s going for a single credit clear. On the Easy difficulty players should face weaker enemies and slower bullets. On Hard the aforementioned inertia kicks in and the overall challenge gets bumped up a bit. There’s no health recovery in between levels regardless of the chosen difficulty.

By far the trickiest parts of Zombie Nation are the energized nets and the bosses. Timing is key to win against the Statue of Liberty, but you need to get aggressive on the zombified Paul Bunyan and his axes because if he gets too close you’re as good as dead meat (notice the slight scent of a pre-Cho Aniki design here). Later bosses aren’t nearly as interesting or even challenging, and the anticlimactic battle against the alien who caused all the zombie fuss is a tad disappointing. Apparently the developer thought it was better to invest in a beefed up ending showing the results of your heroic endeavor instead of infusing the game with more eccentricities.

I beat the game on Hard, starting on the first stage. There is an awkward high score table that’s shown after the attract mode, so wait once the credits are over to see your final score (see below). Note: the game’s opening screen puts the word Samurai above Zombie Nation, and in the Japanese version the character is a long-nosed tengu head instead of the head of a flying samurai. Some of the in-game sprites are also altered, but the gameplay seems to be the same. 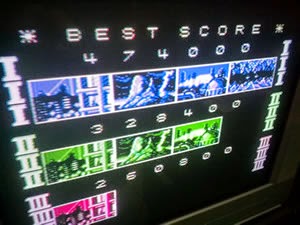