As innovative and fresh as Gradius was, and this will sound weird, I have always wondered if people would somehow think its power-up system was a bit too convoluted for a shooter’s sake. There’s no denying that the weapon array came as a huge leap from the simple shoot/bomb formula of all shmups released prior to 1985, but what if someone found it too complicated? I myself have seen a few bouts of complaints about this, even if the persons involved later refused to admit their reluctance to fully embrace the Gradius way of shmupping.

Enter Salamander, the first spin-off to Gradius. It played just like the groundbreaking Konami classic, but allowed players to power up their ships instantly instead of waiting to get a determined number of capsules. The simpler mechanics relieved much of the focus demanded by the regular Gradius canon, which sounds just perfect for those people I mentioned in the above paragraph. Furthermore, it adds vertical stages while giving away the impression that you’re playing an easier game – which is actually true if you exclude the fight against the 4th boss in the arcade. As a whole, the PC Engine port fits that notion with the finesse expected from Konami, with the advantage of warranting its place in the gallery of conversions that provide an experience that’s very distinct from the arcade original. For instance, while PC Engine Gradius tries to mirror the arcade down to the details (bar the extra level), Salamander certainly doesn’t.

I was a bit disappointed with the fact that all voices are gone from this version, so you need to memorize what each icon does when you take it after you have killed a wave of orange drones (or a single one in special cases). Similar to what exists in the arcade version, there’s a neat tutorial included in the attract mode, so be patient and wait a little before diving straight away into the game. Items to be picked consist of speed-up, missile, option, laser, ripple laser and shield. These upgrades work just like in Gradius, the only obvious difference is the instantaneous effect they provide. And as a means of compensating for the disappointing lack of voices, each stage now has an emblematic name that ties in with a general sci-fi motif instead of the whole organic backdrop seen in the Life Force iteration (which was never released for the PC Engine).

Playing Salamander is a little odd and different from playing Gradius, in that players need to incur in more memorization in order to survive simple sections in the game. The organic walls of the first stage are the prime example of this, but you can also add to that the flaming arches of the third stage and the fast drones of the fifth stage, coincidently all of them in horizontal levels. However, the PC Engine port has a particularly aggravating fourth stage thanks to the iffy hit detection zone close to walls, the more unpredictable nature of the volcano spits and the slightly downgraded efficiency of your missiles. These, by the way, have lost their ability to hit the ground in vertical levels, being restricted to crawling vertical walls only. There are still drones coming out of ground hatches, but these are few and far between.

All other differences in the port when compared to the arcade original are minor and most of them come off as improvements. The most welcome are the correction of how the shield works (here it won't deplete just by touching other power-ups) and the toning down of the 4th boss's ridiculous difficulty. Some areas were fleshed out with a little more action, most notably the 3rd and the 5th levels (fire and outer space). They received more variety in enemies and hazards, keeping the player more on his/her toes instead of turning into a snoozefest once you memorize everything. I have seen claims that the music has been improved on the PC Engine, but that's debatable. I was rather impressed with the sound effects though, one example being the neat cave echoing effect you hear when you kill some of the fire birds in stage 3. 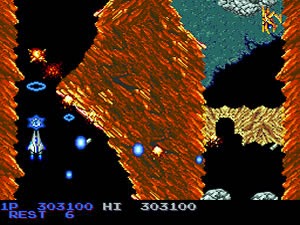 Volcanos! Or is it Volcanoes?

As for gameplay departures, the only one that's worth mentioning is the adoption of checkpoints. But don't fret, ye who hate checkpoints! Checkpoint recovery in the PC Engine version of Salamander is easier and far from the traditional Gradius way of implementing checkpoints (where it's way too hard to recover in some of them). Moreover, there are far more checkpoints in a level then you'd normally expect. There's also a generous extend scheme in place that gives you an extend every time the score cycles through the 50 thousand mark (50K, 150K, 250K, etc.), which leads to cumulating lots of extra lives if you manage to play well enough. Some checkpoints give away so many points that for every two lives played in them you can get an extra life! Scorewise it's important to collect every possible item since each one is worth 2.000 points. I didn't bother taking more than two speed-ups though.

The port preserves co-op play, and a particularly interesting thing I noticed is that with just one joystick you can control both ships if you wish (dual-play lovers take note!). Players can select between Beginner and Expert difficulties at the start screen, and the main difference between both is in bullet count and speed. Regardless of which one you choose, Salamander loops and increases the challenge a good deal in its second round. That's when checkpoints start becoming really demanding. Having a turbo controller around for a faster rate of fire is nice because the default autofire isn't actually ideal.

As expected from other Konami 16-bit shooter ports I tried, I had lots of fun with this version. I played on Expert difficulty and reached stage 2-6, with the best result shown below. 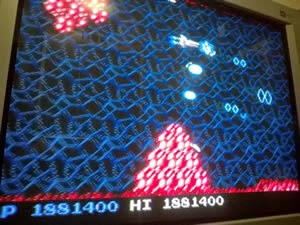