I still remember when I first got my Japanese Mega Drive, and the few games that were available for me at the time. I spent my free time with all sorts of games, but the one I liked the least was a Japanese slow-paced shooter whose name I was never able to figure out. It so happens the game was Twin Hawk, which down here only appeared in bootleg copies of the Japanese release, known as Daisenpu. Originally an arcade game, this port was never released in the West in any form, therefore the only way to play it without emulating is by tracking down either the Japanese Daisenpu or the European cartridge released as Twin Hawk. Other than that, one can always go for the PC Engine HuCard or CD versions.

Ditching this game in favor of others is perfectly understandable, especially if you're a kid. Of all Toaplan arcade conversions available for the Mega Drive, it's the least flashy, attractive or even engaging. Coming out as a mash-up between the aesthetics of Flying Shark and early ideas initially presented in material such as Tiger-Heli, Twin Hawk does not offer the same rush of other Toaplan verticals. Honestly, it feels like a regression from the awesome action of Twin Cobra, which had been released in the arcades a couple of years before, and it was bound to be eclipsed by its contemporary sibling Fire Shark.

The good news is that since this a Toaplan shooter we can still find something redeeming about it. There is a gimmick, and a pretty nice one when you think about world war based shmups.


Flying over an easy jungle
(courtesy of YouTube user Encyclopegames)

Basic inputs consist of shot (A or C) and "support squadron" (B). For the mission of raiding dangerous terrain and fighting the bad guys, our little green aircraft must count with the aid of this so-called support squadron. For all purposes it corresponds to the quintessential bomb attack that's present in all old school shooters, but since you're in charge of the whole operation you can command the extra planes to behave in several different ways. By pressing B once they'll arrive from the bottom, stand in formation and add their firepower to yours, providing a curtain of bullets that's great to quickly wipe out the horizon. Each of the six planes has a 1-hit life, meaning that they will plummet to the ground as soon as they get hit, if possible onto an enemy for some extra damage. However, a kamikaze attack can be triggered at any time by pressing B whenever the planes are in formation. If you want to sacrifice a whole support squadron and turn it into a powerful bomb press B once to call it and B again before the formation is in place, provoking a huge explosion in front of the plane. The detonation inflicts lots of damage and blocks all enemy attacks in the hit area.

For each life you get two support squadrons to use. Deploying them is very important for survival, obviously, and the longer you have extra planes flying by your side the better. After all, they help kill baddies and take hits for you. Much of the fun of Twin Hawk is in trying to keep these planes alive by careful maneuvering because all single shots fired by enemies are aimed at the player's own craft. It all comes down to correctly dealing with the reload period of the enemy army, as well as finding the gaps where bullets will pass through and miss the remaining planes in the support squadron. Besides that, since this is Toaplan you'd better watch out for snipers and tanks coming from behind. A mild rank progression based on survival time and firepower level is to be expected as well.

Little trucks and boats need to be destroyed in order to release items that descend bouncing on the sides of the screen. Items disappear forever if you let them reach the bottom, so don't wait too much to take them. There are power-ups (P, yellow carrier), extra support squadrons (H, white carrier) and extra lives (a glowing little plane, blue carrier). It takes four power-ups to max out the plane's firepower to a thick stream of 8 parallel shots. If the carrier truck/boat appears in green you'll only get a few points, with no item to be collected. Carrier placement is always the same throughout the game, but colors/items are all randomized. Note that there are also score-based extends, granted at 70.000 points and at every 200.000 points afterwards. 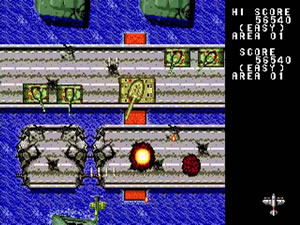 A bridge over troubled water

What's suprisingly odd about Twin Hawk is that despite the poor resources and the slow speed of the combat plane the game still manages to have that "one more go" factor. All you see are three variations of tanks, boats, turrets and the occasional powerful fortress or ship that serves as boss, but the simple graphics are made better by decent use of color. There is no separation at all between stages, you just see the area indication change with the background music, which by the way is quite decent and grows on you after a while. The game is short enough and most checkpoints aren't too demanding, and with only four stages that loop indefinitely I guess that Twin Hawk fulfills its purpose as a lesser but still enjoyable shooter.

When the game is played on a Japanese console it defaults to Daisenpu, which is slightly harder than Twin Hawk, the version that appears when the cartridge is run on a Western console. In both you must go to the options screen to set rapid fire to ON if desired. Regarding rapid fire, one advice I can give is that it's possible to obtain a higher rate of fire by alternately tapping buttons A and C, a trick that works well while standing on top of any of those larger tanks when they're not shooting.

My best result playing on a Sega Genesis is below (Twin Hawk), on Hard difficulty. On the second loop area numbers keep advancing, so area 7 means stage 2-3.