All well-known shmup developers originated in the arcade scene. Technosoft is unique in this regard, in that the company’s core base was always in the home console market. Hyper Duel was just the second but also the last arcade game made by them. For those wondering, the only other arcade title Technosoft developed was Thunder Force AC, a market afterthought built on the phenomenal success of Thunder Force III. Contrary to what some people think, Blast Wind was never released for the arcades.

The Saturn port for Hyper Duel came out a couple of years after the arcade original and quickly became one of the rarest and most sought after shooters for the system. It’s undeniable that the game carries a strong Thunder Force vibe, with the same type of fast-paced action and graphics that somewhat resemble that series. Hyper Duel is a reasonably shorter shmup though, and it’s a got a different kind of challenge since it’s obviously aimed at coin eating. The best thing about the port is that the CD includes both the unaltered arcade version and an updated Saturn mode with enhanced graphics and difficulty. It’s pretty much the same game but the tweaks are all for the better, and the exclusive arrange version practically justifies the hype if you’re a Technosoft fan. For those who dig extra stuff in their ports, let it be known that the package also comes with a nice animated intro and additional save functionality for playtime stats.

In order to have a clearer idea of the differences between both iterations of the game I decided to tackle the arcade version first, playing the Saturn mode only after I had cleared it. Basics are the same for both versions, starting with the three “buster-gear” ships available for selection, so I’ll describe the features of the arcade mode first. 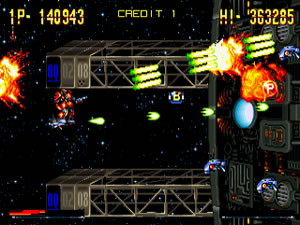 All pilots/ships are capable of battling the enemy in two forms: ship and armor. Button A activates ship mode and fires the default pattern for each character. Button B activates armor mode and turns the ship into a slow-moving robot capable of firing a thicker beam in different angles. While the ship form allows the player to move faster and actually dodge stuff, the armor form sacrifices speed and size in favor of power and coverage. It’s possible to shoot at 45 degrees up and down by moving up and down, whereas any horizontal displacement doesn’t affect the beam’s direction. The problem with the armor form is that controlling it is a cumbersome task, and should only be done once the enemy pattern is thoroughly known.

Special attacks are triggered by combining both shot types. While in ship form, press the armor button to deploy two stationary orbs above and below the ship to shoot an extra rotating fire pattern. While in armor form, press the ship button to deploy two rotating orbs that add extra firepower to the armor beam. Special attacks are gauged by an energy meter that either refills itself slowly or gets refilled by a good chunk if you take a B item. Besides their obvious offensive nature, special attacks are also good for defense because the orbs are capable of absorbing enemy bullets, even if the special attack meter is empty.

Ship/armor is powered up by taking the P items brought by destroyed carriers. It takes three to achieve maximum power, and small but helpful homing missiles are granted with the second power-up. Sometimes the carriers will drop an item that cycles between T and G, which generate helpers that follow the ship around and provide automatic extra firepower. T (Tracer) creates a small ship that hovers around you and shoots forward, while G (Gunner) creates a smaller independent mecha that aims and shoots at enemies at will. It’s possible to have up to three of these following you around, and each helper can take five hits before dying. Gunners are good to deal with slow enemies, but they’re quite unpredictable. Sometimes they’ll drift off screen for a long spell and return all of a sudden, or stupidly get in the way of enemies and bullets. Tracers are a good choice if you’re able to keep a safe distance from enemies and destroy them before they shoot.

As I mentioned above, the fast paced style of Hyper Duel lends itself to open comparisons with the Thunder Force series, but because of its arcade origins Hyper Duel is a much more straightforward experience. All stages are short but never dull, demanding aggressive play and constant use of the special attacks, either because of enemies that appear from behind or in response to enemies that threaten to dangerously clutter the screen. There’s a progression between stages that sees the ship/mecha starting in outer space, scrambling across tunnels, descending and taking off from planet landscapes and facing a huge spaceship at the end. All of this is infused with varying difficulty, which makes Hyper Duel the only Technosoft shooter that adopts a rank system. It’s quite simple: live longer and face stronger enemies and bullets. Rank isn’t that taxing in the arcade version though, at least when compared to the Saturn version.

The best thing about the Saturn arrange mode is that it allows the player to lock the armor weapon in place with a third button, thus eliminating an inherent weakness of the arcade version’s gameplay. The game as a whole is prettier, with a lot more color and much better music. On the other hand, rank is definitely more aggressive and further heightens the challenge. There’s a notorious increase in difficulty on bosses, for instance. The 6th one spits even more bullets, and the odds of surviving the final battle are only in your favor if you manage to get there with a good number of spare lives. That’s why the two extends at 500.000 and 1,5 million points are very much welcome.

Pilots Keith, Lisa and Lloyd are all equally fine, but Lloyd is the most unbalanced one - he’s got the most powerful ship form but his armor weapon has a very limited range. Keith’s trademark is a spread pattern, with Lisa standing between the colleagues with a focused laser shot. She’s the fastest and doc Lloyd’s the slowest, but speed isn’t really a defining characteristic when choosing the pilot. Lisa does have the best special attack when in ship mode, which is good to kill those stray drones and secure that perfect bonus. By the way, this bonus is just one of the features that comprise the scoring system of Hyper Duel. Other rewards when a boss is beaten include a stage completion bonus, 10.000 points for each helper that comes out alive and another bonus based on the energy left in the special attack meter. Don’t forget that whenever you stop moving the score counter increases slowly (roughly 100 points for each 3 seconds). Lastly, watch out for the floating crates of the 5th stage, which unfolds like a bonus level: each chip you take after destroying them is eventually worth 10.000 points; if you just crack a crate open without destroying it chips keep coming out until it leaves the screen. All scoring techniques are the same for both game versions.

Although solid and relatively fun, Hyper Duel barely escapes the fate of being a drab shooter due to a couple of very recognizable difficulty spikes and a scoring system that encourages greed (when stupid deaths abound). While the rest of the game is fairly manageable, defeating bosses 6 and 8 is always nerve-wrecking. It’s really cool to have the 4th boss fighting alongside you during the final showdown though, you almost feel bad when he’s assimilated by that evil creature.

I beat Arcade mode with Lisa and Saturn mode with Keith, both on NORMAL, respective pictures below. 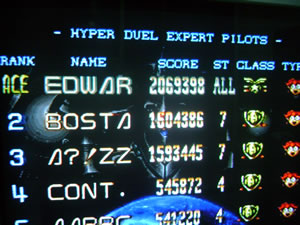 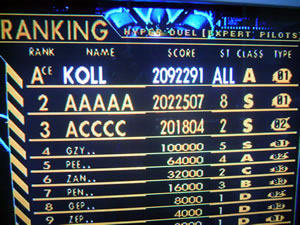