Even though it was relatively well regarded within the circle of arcade connoisseurs, Image Fight unfortunately wasn't able to kickstart a long-running series as its horizontal sibling R-Type did. Sure the game had its share of ports at the time, of which one of the most faithful was the version released for the PC Engine in 1990. The experience for developer Irem on NEC's platform must have been a good one though, after all the PC Engine CD add-on was home for the exclusive sequel Image Fight II - Operation Deepstriker, which still stands today as the last we've seen from this particular gaming franchise.
With an animated intro subtitled in English and lots of intermissions with Japanese dialogue between stages, Image Fight II is one of those treats of the 16-bit era that catered to the sensibilities of gamers who wanted a little more story to justify the extra space provided by the storage capabilities of the CD media, as was the case of R-Type Complete CD, another Irem offering in the same platform. Fortunately all cut scenes in Image Fight II can be quickly skipped or even made completely absent by switching the correct option on the configuration menu (set Visual Scene  to OFF). What's left is a new outer space adventure that's strikingly similar to the first Image Fight, sharing main themes and environments for most levels but with a more balanced design in terms of gameplay (busier from the start, not overly claustrophobic, single-loop only). 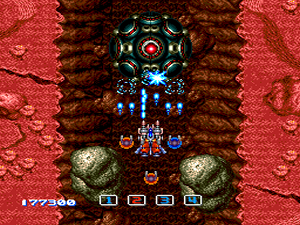 Boss inside the rock planet in stage 6
Since this second chapter mirrors the first in lots of ways, it also requires players to achieve a certain destruction ratio during stages 2 to 5 in order to advance in the second part of the game without having to go through a penalty area. The idea is that you're in a simulation environment during the first half and in real battle from stage 6 onwards. Why the first level was left out of the 90% destruction average requirement is probably explained during the animated intermissions, I just couldn't figure it out because they're all in Japanese. Another intriguing aspect is that you're completely stripped off your power-ups when starting certain stages (2, 4, 6 and the penalty area).
Speaking of power-ups, the rules remain the same as in the original. By destroying floating crates you uncover two types of upgrades. The first one is an orb that switches colors between blue and red: it adds a floating satellite that hovers around the ship, in a maximum of three; the first one appears on the right, the second one on the left and the third one in the rear position; blue adds a pod that fires straight up, red adds a pod that fires in the opposition direction you're flying to. As you grab the initial orbs you can mix colors, but once all three are in place any further orb applies its respective color to all pods.
A second type of power-up adds a frontal attachment armor that creates a completely different form of attack, in a gallery that includes more powerful firing streams and several variations of spread shots and lasers. Most of them are similar to those seen in the first Image Fight, but there are also a few new ones such as a seemingly useless smoking gun that's actually quite helpful against the second-to-last boss. Another important armor is the one that fires a single powerful exploding shot that's essential if you want to blow the 8th boss away in a snap. The catch is that in order to replace armors you need to destroy the current one to collect the next, an action that's achieved by allowing them to receive damage either by swallowing bullets or by touching a wall.
Touching or scraping walls is more reliable when you're moving at lower speeds, of course. Button I switches back and forth between four predefined settings. Button II shoots and the SELECT button sends the lateral orbs forward in a special attack (the same effect of pressing buttons I and II at the same time). The exhaust flare of the ship when changing speeds doesn't cause any damage anymore, but in a nice visual twist the ship now has four different sprite appearances, one for each speed setting. Image Fight II comes with autofire by default.
Introduction and first stage of Image Fight II - Operation Deepstriker
(courtesy of YouTube user The VideoGames Museum)
With the exception of the relatively busy first stage, levels 2 to 5 are basically softer rehashes of the same levels seen in the first game. Image Fight II only feels like a real sequel afterwards, with levels that feel completely different in design, tone and bosses. The orb mine field in stage 8 is particularly tricky to navigate, and the attacks of the huge spaceship in stage 9 do require some knowledge to be properly avoided. All stages have two checkpoints except for the last one, which actually feels easier than previous levels. Speaking of easier, the ship's hitbox is now more lenient than in the original game, which makes navigation in tight spaces less demanding and allows the abuse of safespots against a few bosses.
Since the game doesn't show your life stock unless you die, it's hard to pinpoint the exact point where you gain extra lives by score. Suffice it to say that during a full credit you get two of them. As for the scoring system, the checkpoint structure does favor checkpoint milking as the main source of extra points. Minor projectiles are worthless, so there's no point in trying to prolong boss fights to destroy more of them.
Regardless of the fact that this sequel was developed from the ground up for a home console, Image Fight II - Operation Deepstriker certainly lives up to the original game. Graphics are just as sharp and the music fits the action nicely, as do the sound effects. It does feel slightly less difficult in terms of pure challenge, which is of course no reason for complains whatsoever. By reaching the end of the game (continues allowed) an Omake selection is unlocked in the options screen. It allows you to play the game with R-Type's R-9 spaceship or Gensan (a.k.a. Gen-San, the hero from Irem's own Hammerin' Harry platforming franchise). There's no change in weaponry for either character though, so it's just a cosmetic swap (I didn't check if there are differences in hitboxes).
It wasn't my intention to milk anything in my 1CC attempts, yet I was forced into replaying a few worthy checkpoints in the final result below. The high score buffer in the options menu shows the result of your last credit only, so before trying again don't forget to check it out as soon as you achieve a score you want to immortalize in pictures. 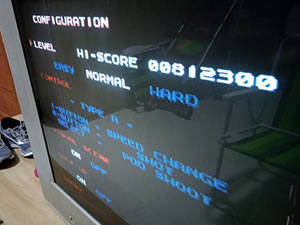