What and odd Japan-exclusive title... Short in length, and yet frustratingly hard at first play. The SNES is not famous for having an extraordinary shmup library, and Acrobat Mission helps to keep that statement alive by being weird, clunky and almost completely devoid of any replay value. It would be interesting to see the Arcade original someday, just to check how badly ported it was for Nintendo's 16-bit console.

First and foremost, there's no option to turn autofire ON. We all know there's only one game that kinda does it right, and that game is R-Type. Since this SNES oddball is nothing like Irem's classic, you're stuck with a lot of button mashing in between charge attacking and bombing. Charge attack can be done with either one of the two available extra weapons: the W (wide) and the H (hurricane). It can't be used with the stock weapon. Keeping the fire button pressed will cause the ship to glow and charge, and the button's release will trigger a special attack. Don't ever bother doing this with the H weapon - it's glitchy and ultimately useless. I think it's better to stick to W 100% of the time. Its special attack even has the ability to annihilate most of the enemy fire. 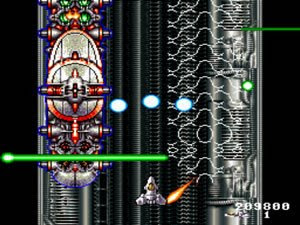 Not only is the H weapon glitchy, but the bomb takes a long time to explode after you've used it. It's not uncommon to die while waiting to be warmly protected by the bomb blast, which forces you to time your bombing accurately, especially against bosses. Enemy fire can be overwhelming at times, and a good deal of movement is required in order to survive. And the huge hitbox? Damn, if you think you've seen your load of big hitboxes in your shmupping career, I'm pretty sure you'll have a different opinion after facing Acrobat Mission's last boss.

The rest of the gameplay aspects are probably there to help. You can't die by colliding with enemies or debris. In fact, you can knock them at any time or even get pressed against the bottom of the screen - be aware though that the ricochets can send you straight into a lost bullet or laser! The ship's booster also causes some damage, but it's so sluggish and slowly animated that you can't really rely on it. When you get hit, you'll wander about smoking for some seconds, with the chance to damage some enemies when you finally explode (I particularly find this annoying). On a side note, continues are unlimited and provide for less stress when practicing for the 1CC. 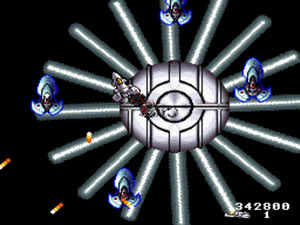 As I mentioned earlier, replay value is practically non-existent. It couldn't be different, for this is a very boring shooter. Since I always try to find at least one thing redeeming about games - apart from challenge - for this one I have to go with the 1st stage BGM. I noticed I started to like it during my last runs, because it's rather cool and has a somewhat epic feel. Unfortunately, that doesn't happen with the other songs in the game.

I do have one useful (well, I think it is...) hint for whoever aims to 1CC Acrobat Mission. It seems that the strongest part of the W weapon charge attack is its tip. Keep that in mind while fighting that pricky last boss. Oh, and try to get there with extra lives in stock (gained with every 100.000 points).

Here's my final score on NORMAL: 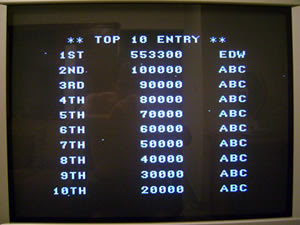