The almighty NES had Gradius. And that's a huge thing to say for any gamer who grew up during the 80s and 90s, for Sega home machines never saw a glimpse of Konami's most famous shooter at the time.

The Master System, however, had some honors to compensate for that, and the most notable one was its famous port for the also classic R-Type. Of course classic shmup titles are not restricted to these series only, and even though Darius is lesser known or appreciated than the aforementioned ones, it still holds a special place in my heart as one of the best to ever grace the shmup scenario. Especially Darius II, which in the west was renamed as Sagaia. The name "Sagaia" actually always sounded very nice to my ears, in a case where this kind of change didn't exactly mean a bad thing at all.

Sagaia was ported rather late for the Master System, in 1992. By then the Mega Drive was steaming in full throttle, but Sega's 8-bit console was pretty much alive in a couple of dedicated places like Brazil. And having played the MD version in every single detail, it was no wonder I would eventually have to try the SMS game. For those who have no clue of what Darius means: here you fight fish and sea creatures in deep outer space or in Earth-like environments. The order of the stages can be chosen in a tree fashion named according to the alphabet, and power-ups help you improve your main shot, laser, bombs and shield.

Oh, the shield in Darius, the best shield sprites ever designed for a shoot'em up! 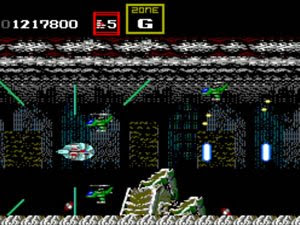 I assume the main concern for everybody is how much was taken out of the original game in order to fit the Master System limitations. The good news is that from a gameplay point of view everything is there, apart from the reduced number of stages. You can even choose between Proco Jr. and Tiat Young (who has a ship already powered-up once as default). The bad news is that you get lots of flicker during mid-boss and boss fights and a great deal of slowdown when things get hectic. While graphically the game looks really good from screenshots, seeing it in motion is sort of a mixed bag of 8-bit accomplishment. There's nothing noteworthy in the first stages, but as the game progresses you're granted with very fine parallax, as in stages E and H. Stage J, on the other hand, is a living nightmare because of the choppy scrolling and all the previously mentioned problems happening at the same time.

The music is where the SMS port tries to redeem itself. Sagaia has some of the best composed tracks ever, courtesy of Zuntata, and that's no different in this game. You will get in the mood for some space fish blasting, trust me! 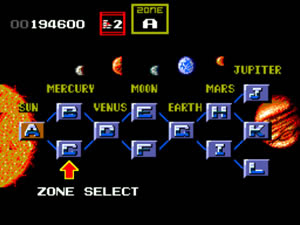 8 bit shmups are dead for most shmuppers out there, and the fact that this version is not that good doesn't help in justifying people to play or even buy it. Nevertheless, Darius fans should definitely try the game if they get the chance. It's certainly harder than the Mega Drive port - except for the bosses, who die easily if you're powered up - and will probably entertain you for a lazy afternoon.

I managed to beat it with no misses on NORMAL, route ACDEGHJ, and that's the score I got: 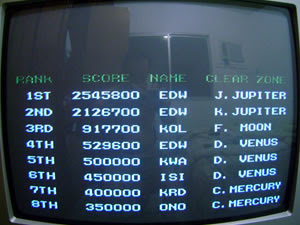