Answering to a "shmups torture" call from a fellow shmupper in the shmup forums, the game I selected for my torture session was XDR - X-Dazedly-Ray, which is known worldwide as one of the smelliest turds ever to grace the almighty Mega Drive.

[ Yes, my friends, I do believe that bad shmups also deserve some attention ]

Using it as pre-sleep relaxation fun, on the first day I got familiarized with the game, reaching the 6th boss. On the second day I looped it. And on the third day I had my definitive run for high score purposes. For such a bad game, the time I spent with it wasn't so short, but then again the game is relatively easy. 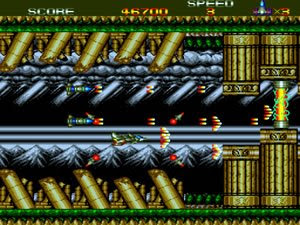 Initial impressions of XDR reminded me a lot of Insector X for the same platform, since both games seem to share a good number of sound effects. I have absolutely no idea of developer Unipacc's origin, but one could think it was some sort of a rogue and utterly failed stray division of Taito. Thankfully XDR was their only outing as far as I know of.

As bland as the gameplay is, it surely doesn't hurt as much as the slow pacing and regular music. The ship's hitbox is huge, and it takes some time to get used to not crashing on obstacles by accident. You have 4 different speeds available, and your 3 weapons are the main beam (B icon), laser (L icon) and wave shot (W icon), with 2 maximum options (O icon), shield (S icon) and missiles (M icon) on the side [and also extra lives with the "1" icon - EDIT 6-MAY-2010]. From there you know that it borrows a lot from the Darius series, including the fact that the game urges you to turn your ship into a powerhouse and not die – or else you're screwed. To make things a tad more difficult there's also the checkpoint system, which splits the stages in two sections. 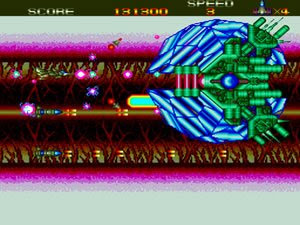 The other franchise that comes to mind while you're playing XDR is Gradius, whose trademark is all over the bosses. Weirdly enough, you don't get any scoring when you kill them. There's also no bonus score if you get extra icons after the maximum power has been reached. Further loops of the game have stronger enemies, but there seems to be no change in bullet speed/count.

I can't finish this text without mentioning the incredible "warp from hell": due to the extraordinary game's programming, when you're fighting the last boss your ship might disappear for no reason and leave you blind for some seconds. A secret boss power or another glaring flaw of an already poor game? You tell me!

The high score below was obtained on NORMAL, and the game was played until the 2nd stage of the 3rd loop: 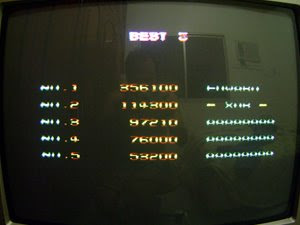 Note: this text was cross-posted with minor changes on Sega-16.
Posted by Edward at 2:01 PM