Ordyne is originally an arcade title released by Namco in 1988. It was ported one year later for the PC Engine/Turbografx-16 home console, and would eventually appear in the 4th installment of the Namco Museum series for the Playstation.

I spent two nights playing the PCE HuCard, and my impressions were very clear as to what it reminded me of: Fantasy Zone and Parodius. From Fantasy Zone you have both the colorful design and the flying shop gimmick, which is an in-stage icon where you go to buy extra weaponry, speed-ups and lives with the money you collect from certain defeated enemies. From Parodius you have the whole feel of the game, both in the graphics and music departments. Of course Ordyne’s popularity is miles away from the popularity of these two games though. 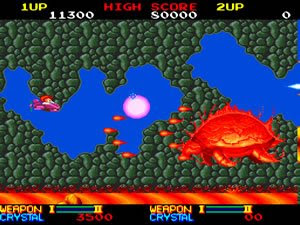 The setting in this little shooter revolves around rescuing a lady in danger, a situation shown during the opening scenes. While on your mission to accomplish this task, you’ll be going through cute designs for backgrounds and objects and a decent array of special weapons beyond your regular shot and bomb. One differential in Ordyne is that the big weapons have faces on them when shot, which looks neat and cartoonishinly menacing. And again, just like in Fantasy Zone, these weapons can only be used during a limited amount of time. Since there’s no trick for getting unlimited ammo, it’s advisable to get used to the default shots as fast as possible. It’s not such a big deal really, because the game is designed on the easy side and requires just a little precaution for you not to die repeatedly. In general, it’s good practice to avoid standing too much on the right side of the screen - there are lots of instances where enemies will materialize out of nowhere and kill you instantly!

Besides the shop for enhancements there’s also a lottery flying shop that grants you a random prize in exchange for some of your money. It’s not possible to understand much in the Japanese version of the game, but it doesn’t matter because there are no bogus prizes (speed down, power down, life loss or such). Extends are given every 50.000 points, and each extra life is worth 20.000 points upon completing the game. 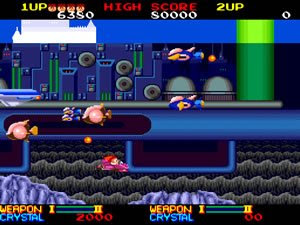 At times Ordyne feels rather claustrophobic, like in the rotating globes passage of stages 2 and 5 and the “K” blocks of the last stage. Stage 6 is a boss rush that’s strangely easier than other levels - the 3rd boss shows up again but this time it won’t shoot those pesky fireballs of its first appearance, throwing up small spaceships instead. The overall feel of the game is very childish albeit not so recommended for kids since it has no difficulty adjustments or any options at all. It’s ultimately an unremarkable experience that’s hardly prone to thrill gamers nowadays, except for those who keep a warm place in their hearts for 8/16-bit regular cute shooters.

So here’s my final score for the PCE version of Ordyne: 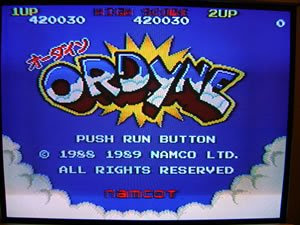