I believe the most famous home port of Choplifter is the Master System one, and for a long time I thought it was the only 8-bit rendition of this awesome game. When I learned there was also an exclusive Famicom version I almost immediately rushed to get it. What other goodies beyond those I already knew would that tiny Jaleco box hold for me to uncover?

A few days ago I finally plugged it in to see what it looked like, and the first impression was NOT good. The first stage looked absolutely awful (especially when compared to the SMS game), the helicopter was too slow and the controls were sluggish as hell. After such a sad hit it took me some special will to seriously face it. There should be a way to overcome what seemed to be a chore, because when you start playing this little shooter you get so many game over screens that you can't help but wonder what went wrong with this version. Bear in mind I'm writing this as a long time SMS Choplifter fan, so maybe that wouldn't happen to someone exposed to the NES version first. 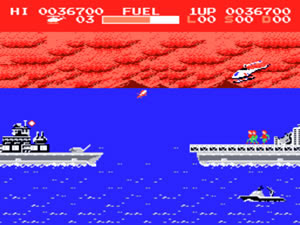 One of the buttons is used to fire, and the other to turn the chopper around in 3 positions: left, right and facing the screen, from where the regular fire becomes a bomb dropper used to kill tanks. Heli's movement is based on the real deal, so it tilts forwards and backwards as you move around, also tilting shot direction. If you try to land while tilted you'll die. The mission is to rescue POWs in bunkers/ships. Hit the building, land to allow them to board and fly back to the base to drop them. You can carrry 8 hostages at a time, and when you rescue more than 20 you'll advance to the next stage. If you manage to rescue these without killing any hostages you'll be rewarded with 50.000 points. They can be killed if you land the chopper right above them as they flee their prison, run around and wave.

I don't know about you, but I think this is one of the most simple yet brilliant concepts for a shooter. Sadly, Jaleco was no Sega so the Famicom game didn't turn out as good as Sega's. The slower pacing will make you want to clear the surrounding area before rescuing hostages, which wasn't actually necessary in the SMS version. There are also lots of other differences - in some of them the NES version is closer to the arcade game, like in the fuel bar that's replenished whenever you deliver back the hostages. Tanks here are dumber and their bombs don't kill hostages at all, but the trick with the up tapping to keep'em from coming doesn't work. Enemy fire is deadly and almost always aimed, so a good deal of precaution is necessary. The game is comprised of only 4 stages (desert, sea, cave and city). I don't know if the city stage is inherited from the arcade, but it's absent in the SMS version and is definitely the cooler one in the NES. The game feels unbalanced though, because the most difficult stages are the first and the last - the cave level being the easiest. Adding to the mediocrity in the graphic department, there's only one tune played during the whole game. 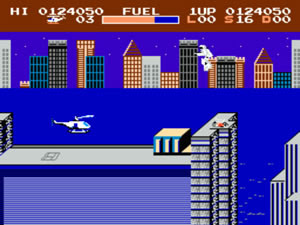 A good thing I can say about this port is that the second loop is a lot harder than the first. Ground enemies fire much faster bullets, and each stage has a new enemy to deal with (straight out-of-nowhere missiles in the ocean stage, a faster moving launcher in the caves). I also admit that after you get in the mood, get past that damn first stage and adapt yourself to the pace of the game, the NES Choplifter can be fun. But it will never, ever, come even close to the faster, better port released for the Sega Master System. 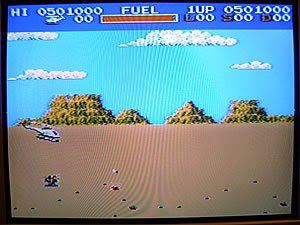