Even before I was aware of my unconditional passion for shoot’em ups there were those shooters that I played - and loved - extensively. They might have been mixed with platformers and racers, but would still draw my attention much more than other titles. One that really stood out from the glorious 16-bit golden era was Taito’s Darius II, renamed in the west as Sagaia. It was and still is one of my favorite games of all time – simply put, the Mega Drive version was among the 3 games I first bought when I started collecting in September 2007.

I must have beaten this game dozens of times. The reason it’s being included in this log is that recently I was urged to improve my previous high score, which led me to a search campaign for the best route for scoring purposes. One of the results is that I acquired an even deeper understanding of the gameplay, and by doing that I also learned how to easily beat different final bosses other than the easy Little Stripes (stages W and Y). 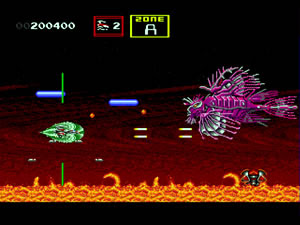 The probability that a shmup addict has boarded one Silver Hawk for space fish blasting at least once in his lifetime is really high. If you haven’t done this yet, you can always go for the various ports of this game and also of the first Darius, Darius Gaiden or G-Darius (not mentioning the special SNES titles). However, differences exist between all of them, and Sagaia has probably the easiest albeit most unique power-up system of all the franchise. Gameplay 101: start out with a pea shooter and destroy a recurring particular wave of enemies to release power-ups for main shot, missiles, green lasers and shield (occasionally a 1UP will appear as well). As death means getting back to a stripped ship, this game is one of those where you can’t ever die. When you manage to do so, in the last stages the Silver Hawk is so powerful that the firepower will take a whole deal of screen space. Therefore a fully powered Darius ship is also a thing to behold and be proud of, especially if you manage to destroy the final boss without dying.

Even though the Mega Drive port of the 3-screen arcade game lacks the co-op feature, everything is finely presented and holds up well according to 16-bit standards. You can choose in the options screen which character you want to play with: Proco Jr. (default red Silver Hawk) or Tiat Young (alternative blue Silver Hawk, with default weapons increased by 1 power-up each). The graphics are nice and the music is awesome - the 1st stage is an epic flight over the surface of the sun, and conveys what I just wrote really well. You can pretty much say Sagaia is an overall easy shooter, and apart from the slowdown present when 2 or more of those wall tentacles appear it’s definitely a very solid and fun game, even for those who are not so hyped about shmups. The stage branching boosts replay value to a great degree, as every run can be made completely different from the previous one. 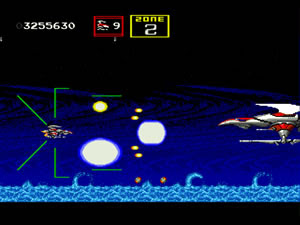 Reasons why I love the Darius series in a whole: design of the ship - curvy, pointy and mysteriously threatening; shield - awesome, simple and yet beautiful; gravity center flip - the way the Silver Hawk flips when moving past the bosses’ gravity center is the epitome of hori-shmup coolness (the fight against Red Crab is a perfect example). Even so, there is one thing I like most about the Mega Drive version of Sagaia: the exploding effect of the bomb that appears from time to time, which is cooler than the Arcade or any other available port.

Here is a list of some score-related aspects of the game: 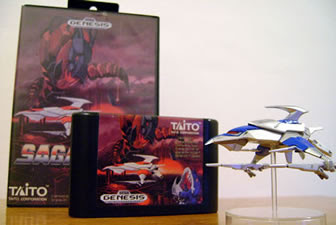 Other cool side of the Mega Drive port is the possibility to activate a "special mode" at the title screen by pressing the C button 12 times. Here there is no stage branching, and you play on a very hard difficulty straight until level L. Almost all stages are boss rushes - only G and H are full stages with minor enemies. All bosses have to be beaten once, with mid-bosses repeating themselves as the game progresses. The last bastard to be taken down is Bio Strong.

A methodical approach was used to get the high score shown below, with all defaults (path ACEINTZ). Wish I could've reached a higher number, but I exhausted my score attack time with the game and I'll only get back to it for fun! 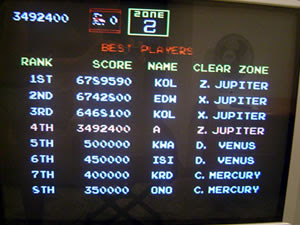