Time to beat another early and obscure HuCard game! And the chosen one was this highly schizophrenic title that seems to not know where it's going in its 4 stages. In a library that's got much better stuff to offer, Rock-on stands as a game that everybody will immediately disregard and leave aside, since there's absolutely nothing to atract attention: the cover is ridiculous, the opening screen is lame, gameplay isn't inspired and the intro brings to you an Engrish message that rivals the most famous bad translations in gaming history.

I mentioned schizophrenic because all 4 stages are highly unbalanced, as far as length and design go. If you start playing it out of the blue, the first stage seems to have no end - but that's only because you touch the infinite icon, which pulls you back to the beginning! You'll have to avoid it to proceed.

For a budget shooter, Rock-on has a good variety of special weapons to be used with the default shot. These can be stocked up to 3; the one you're using is kept and the other 2 get dropped as you pick up more weapons, with the new ones replacing the ones in stock. Since the 2 original controller buttons are used to fire, the special weapons are selected using the START button (to pause you have to press SELECT). Additional icons consist of speed-ups, extra lives and shield. The shield here lasts for a predetermined amount of time and can withstand all bullets while active, but be careful. The ship bounces when hit and can go straight to a wall! 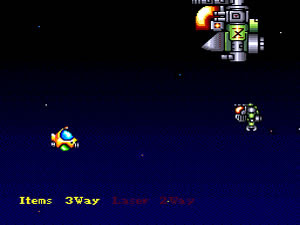 Back to schizophrenia! The 2nd stage is the best looking one, but it ends really fast if you know which weapon to use against the floating ball that appears after a brief while (note: use "Lock-on"). The 3rd stage is the longest one, and comes packed with claustrophobic passages that seem to have no end at all! However, if the walls change their color then you know you're in the right direction. New sections with different backgrounds will follow, each one with two branches in the end. The problem is that depending on the braching you choose you might get back to the beginning... That's highly annoying, so I'll tell you which paths to choose after the first background change: up, down, down. During this level various rubys appear when certain enemies are defeated. It seems that you must collect all 5 rubys in order to see the "real" ending.

The 4th and last level is just like the 1st, but is very short and practically revolves around killing the final boss (hint: use the "Crack" weapon). And then you're done. 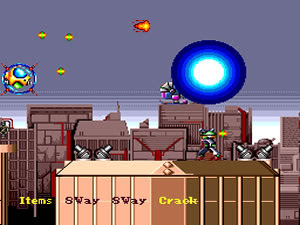 The score in Rock-on appears as money ($) only when you die, during stage transitions and briefly in the end. However, in this game scoring is not a measure of performance at all. Since you can loop the first stage forever by collecting the infinite icon, you can theoretically reach the counter stop if you want. At least this makes it a perfect title for a minimum score challenge!

While the graphics are very primitive and simple and the music is nothing to write home about, there's a bit of fun factor after you get a grip on how to deal with the weapons and how to defeat the bosses. Too bad the game is so cheap, short and so obscure nobody will even care about it.

Here's my useless score during one of the 1CCs I got: 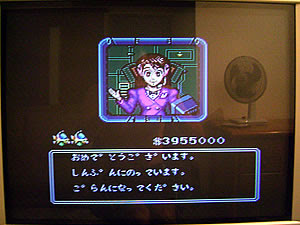