The heyday of the 16-bit game wars saw good releases both from Sega and Nintendo. Sometimes the companies would even push strange marketing moves into their games, which led to some weird combinations that provided at least for new discussion subjects. The North American version of Biometal was a clear example of this flashy trend, because it abandoned its original Japanese game soundtrack in favor of some arranged tunes from then popular dance duo 2 Unlimited. What? Don't have a clue about them? If you have a copy of an US Biometal lying around (or an SNES emulator installed in your computer) and you were at least a teenager during the early 90s I can bet you're just seconds away from remembering who they were!

Playing again after so many years feels like going home. The comeback however isn't entirely cheerful, because this game has aged a bit, and surprisingly so in the music department. I've never had the chance to hear the original compositions, but the dance tracks included in the US Biometal don't sound as cool as they used to be, or maybe that's just the poor way the SNES handled the sound here. It might have been good for its time, but today the most recognizable tunes sound bland and lacking in depth - the only moment where it actually shines is during the 4th stage, when the beat fits the graphical style perfectly and renders the best thing in the whole package. All other stages seem either too graphically shallow or just overall displaced. The 3rd stage reminds me of Axelay, but without any of the graphical excellence or the aural bliss present in Konami's shmup masterpiece. 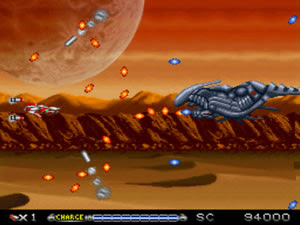 Even with the mentioned shortcomings I still had fun playing this game again. The organo-metallic stage design inspired by H. R. Giger and the Alien movies is cool, and somehow the 1st boss brings to mind the big creatures in the last stage of Hellfire (nerdy note, I know). I like the sense of speed during most of the time, and the GAM (Gel Analog Mutant) shield aspect is enticing as far as gameplay variety goes. By pressing one button you activate it, and by pressing two other buttons it's possible to throw it away - opposite your current D-pad direction - or expand its radius for a circle attack. You can even do both moves at the same time. While at rest around the ship the GAM offers invincibility against almost all incoming shots, any offensive activity causes a great deal of damage on enemies but leaves you unprotected. The GAM has an energy bar that depletes as long as you're using it and replenishes when it's deactivated, so recharging it whenever you have a chance is a good thing to do. You can try playing without using the GAM at all (nice excuse for a special challenge), but there are times where it's just plain impossible to go through without it.

From all 3 types of weapons my favorite is the vulcan. The laser is powerful but lacks side firepower. The same happens with the wave shot, even though it shoots backwards when powered up. It's possible to power up twice when you keep getting the same icon of the weapon you're using. Like the shot power-ups, the missile icons cycle between 4 types of 2-way missile aids. All of them are pretty much the same, but the H gets my preference due to its homing nature. 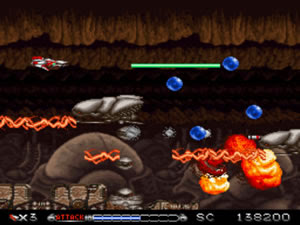 With all the buttons present in the SNES controller, I just wish Biometal had a speed selection function. The ship speed is fixed and for my taste a bit too fast, which makes it difficult to dodge some bullet waves with precision and forces you to activate the GAM to evade them. GAM activation is almost always followed by slowdown, fortunately not in an abusive way. The game is not overly difficult, so it shouldn't take anyone too long to beat, although the cycling nature of the icons is something you must get used to - getting the wrong one in the wrong place is a sure ticket to a sad game over.

My high score on this 1CC run, on NORMAL: 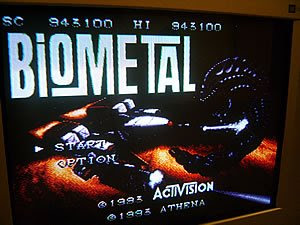 Note: a rather unknown sequel called Biometal Gust was released for the Sega Saturn in the Dezaemon 2 disc.
Posted by Edward at 6:07 PM