Ask about run-of-the-mill ordinary shmups that are available for the PC Engine and 9 out of 10 answers will include mentions to Barunba. I've seen info where this game appears related to Ordyne as a sequel, but it's hard to see anything remotely common to both except for the people who developed them or, speaking of the game itself, the pilot's sprites inside de ship, which are very similar in both titles. While Ordyne embodies an overall psychedelic feel, Barunba takes a standard approach to its theme and gameplay, sticking to the basics in increasingly long 5 stages of slow-paced shooting.

Barunba belongs to a very special category in the genre - the one where there's absolutely no score in the game. This is a huge letdown for any hardcore shmupper, because the only challenge set upon the player is to reach the end of the game. Did I just say "only"? Be aware that you start with an energy bar that can withstand 5 hits, and when your energy is gone it's GAME OVER. There's no replenishing between stages, but there are replenishers during the stages themselves. If you don't mind the lack of scoring, you can always go for the mildly decent challenge, based mostly on memorization and wise choices of weaponry. 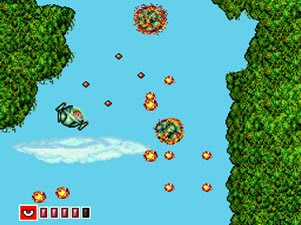 One thing that takes a little time to grasp here is the controls. Designed for play with the standard PCE controller, here you need to also use the SELECT and RUN buttons together with the I and II buttons. You fire with the II button, the I button turns your pod gun clockwise, RUN turns it anti-clockwise and SELECT cycles your firepower between the 4 types available: V (vulcan), S (blue spheres), L (laser) and N (explosion bomb). It's not a natural way of doing it, and it's prone to give people some hard time or even pain while stretching their fingers.

With graphics that are somewhat cartoonish, all 5 stages have very specific atmospheres to them (city/sky, underwater/sea, mountains, forest/cave and castle). The difficulty increases accordingly, as well as the length of the stages (stage 4 seems to drag forever). In every one of them you fight a mid-boss and a big boss, facing a considerable variety of small enemies in-between. The scrolling is always carried out at the same constant pace, but the direction shifts all the time. I did not qualify Barunba as an arena shooter though, for the simple fact that the player ship always faces forward - what rotates and changes the firing direction is just the turret attached to the ship. 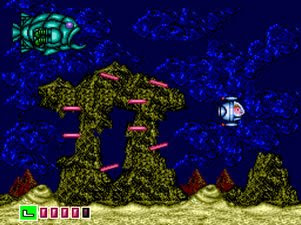 There's a couple of not so evident gameplay aspects. When you collect power-ups for the weapon you're using you'll notice that it gets powered up but eventually powers down if you don't collect another power-up soon. You can still collect power-ups for all other weapons you're not using - when you select them they'll be already powered up! So if you have the chance, spare the best weapon for the boss, like a fully powered vulcan or laser. It's also good practice to be on the lookout for safe spots. And a last hint: yes, you can continue in the GAME OVER screen if you press UP + START!

The music in the game isn't bad, but don't expect ultra-inspired compositions. On the gameplay front, one thing that bugged me here was the hit detection during some boss confrontations. The 3rd boss is a perfect example, because it's virtually impossible to know if you are actually hitting him. On one occasion I kept fighting the bastard for five minutes before he would go down, but later I found out that a fully powered laser is the best choice to kill him. The S weapon is good to cancel enemy fire, but it's useless otherwise.

It doesn't matter if you beat Barunba with just one credit or continuing, the ending will always be the same. Here's a pic to showcase my scoreless 1CC achievement: 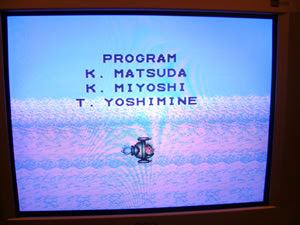