Artemis was kidnapped by the evil Typhon and turned into stone by Medusa. You are Apollo, and to rescue your beloved you must ride Pegasus, beat a series of demonic bad guys and in the end defeat Typhon. This is Phelios, a Greek mythology themed shooter released in the early days of the Mega Drive. While the atmosphere of the game fits very well to the mithology figures, there seems to be no faithful relation to any of the stories involving the mythic characters depicted. I've got no problem at all with that, since what matters to me always boils down to pure shooting experience.

That' why Phelios feels cheap on the first runs. The gameplay isn't what you'd expect, since there's no autofire and you can't rely on the tapping attack, using instead a charge shot that by all means resembles R-Type. It's all very simple because there's just one button to be used: tap it and you'll have the pea shots, hold it and the sword meter on the right of the screen will fill, firing a more powerful shot upon the release of the button. Each life comes with an energy bar that allows some hits before you die and get sent to a previous checkpoint. The higher the difficulty selected, the less energy this bar has. 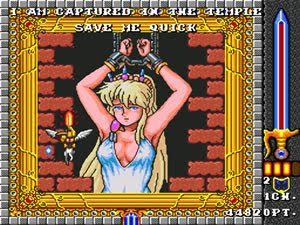 Special items come in the form of speed-ups, options, temporary weapon upgrades (Beam, Across and Homing) and a single energy replenisher that appears only during the 4th stage. It's possible to carry 2 options that work just like in Gradius and follow you around the screen. The best weapon of all was however reserved for the final part of the game: in order to fight the last boss it's necessary to collect all power-ups in the 7th stage to form the word PHELIOS, which upgrades the regular shot into a devastating wider energy wave.

The difficulty is selected when you start the game. Easy mode (NOVICE) has only 4 stages (herein called "chapters"), while Normal (ADVANCED) allows the player to play the full game (or 7 "chapters"). Upon completion of the full game a type of hard mode is unlocked (EXPERT). In this mode you start with only 2 energy bars and get less extra lives (one extend for each 100.000 points against 50.000 in Normal/ADVANCED). Extends in Hard/EXPERT are given until 800.000 points, while in Normal/ADVANCED until 400.000 points, so even if it doesn't seem to be so, there's a limit for the number of possible lives. People aiming to get easy high scores can do it during the fight with the 4th boss, just by standing on the lower right corner of the screen and shooting the fire bullets. It's theoretically possible to milk him indefinitely, which is unfair and showcases the only undeniable flaw this game has.

While musically Phelios is rather competent, with nice tunes that evoke the mythology theme with great effect, it's a bit of a letdown graphically. There are absolutely no graphical highlights, and everything is animated to a minimum only. The simplicity is sometimes enhanced by fast scrolling sections that pump up the gameplay, as in chapters 1 and 3, which are probably the best parts of the game from a graphical standpoint. Some stages seem to drag more than they should (the lava section of the 4th chapter), while others go by pretty fast (chapter 3). There are some tricky bosses, but all of them can be defeated after some few tries. 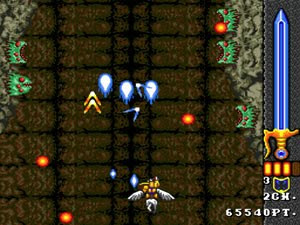 The game comes with packets of backstory that show up during the opening and in the options screen, in the form of brief text descriptions on the stages and the bosses. Artemis appears at the end of each stage to cry for help and cheer you up, and actually speaks in a digitized voice that's good reason for laugh and mockery! As cheesy is it may be, I still like the heroic overall tone of the story and how the relationship between Artemis and Apollo is presented, be it faithful to its mythical roots or not. The ending is especially cute, with that "be patient" interlock that prevents you from cancelling the image of Artemis looking at the player in blissful gratitude.

I managed to beat Phelios both in ADVANCED and EXPERT modes. Unfortunately, both endings are exactly the same. There's a catch on how to get higher scores without milking the 4th boss, and the secret lies during the final fight with Typhon. Believe it or not, I only noticed this while playing the game on EXPERT. The result is shown below - and I did not milk the 4th boss! 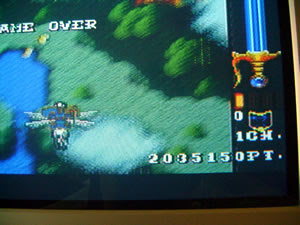