From all shmups that deviate from the norm (the norm being spaceship or airplane shooters), Undeadline for the Mega Drive is one the most notorious "walk'n'shoot" games, a sub-genre that also includes the likes of Elemental Master and Twinkle Tale, if we stick to Mega Drive only titles. Undeadline's notoriety relates almost solely to a presumed extremely high difficulty, something that elevated the game's fame far above the high price it sometimes fetches in online auctions. Due to widespread strong reviews and negative bashing regarding its challenge level, the game is so feared that many people won't even try it. They'd rather play the MSX or X68000 versions - both came before the MD port and are considered a tad easier.

As the name implies, the gameplay in Undeadline revolves around killing lines of undead creatures. Hordes of them come your way relentlessly in 7 vertical stages of great 16-bit action. As Leon the warrior you must fight your way through the armies of the undead while evolving your power and speed to face Dracula in the end. The evolving part adds an extra difficulty and strategy feel to the game, as reaching the last stage in an underpowered condition means horrible and utter death. 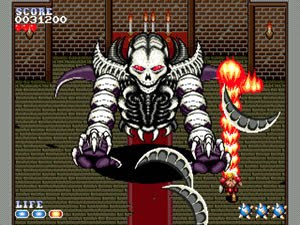 When starting a game, don't forget to go to the OPTIONS screen and switch "Rensha" to ON, since without it you'll have no autofire! After that, I believe the secret to perform well in Undeadline is to understand as fast as possible how the icon chests work. Some people won't agree, but this is more important than the use of the shield that prevents the player from shooting but protects against incoming bullets (C button). There are 2 types of icons when the chests are open: the power-ups and the items. They cycle with each hit, so it's paramount to know the order in which they appear - almost always taking a wrong power-up or item will result in painful death. They also cycle only twice, after when you'll be left with a diamond that's worth some points. Soon you'll find out that most power-ups for weapons are useless, with the crossed/double knives being the most recommended 95% of the time. As for the items, only the 3-hit shield and the blue potion (+1 energy cell) are really useful - for instance, the transparent potion will give you back your default shot and the red potion will take away one of your energy cells. Each life starts with 3 energy cells that allow Leon to take 3 hits, and upon dying you're sent to the very beginning of the stage.

Each credit comes with 3 options that can be used at any time. The option is activated by the A button and surrounds the player with a rotating ball that blocks incoming fire and disappears after taking enough damage. This is a crucial resource that should only be used in certain parts of the game (I use it only twice). Since the first 6 stages can be tackled in any order, I had a lot to try and experience when I started playing. When I reached the boss of the Ruins stage I noticed I would have to use a different weapon to beat him. Enter the flamethrower and an option and voilá! He's history!

Overall I liked Undeadline's design and graphics very much. The enemies are well animated and there's a fine balance in colors that enhances the dark theme of the game without making it too grim. My favorite stage is the Cemetery, with all those skeleton warriors, ghosts coming out of the tombs, living dead surfacing, the thunderstorm and the creepy floating boss. This stage also has the coolest BGM from a soundtrack that's pleasing overall. Parallax is used in a very subtle way and adds to the charm of some stages as the Cave and the Castle. Every stage has an extra life that can be easily found, and each fairy collected gives you 1 point of experience to add to your stats at the end of the stage (ST = knives, MP = magic power, DX = flame, AG = speed). Upon beating the game every life left is worth 100.000 points, but since it's possible to get more than 100.000 points by playing the Drain stage some people decide to explore this in their search for higher scores. 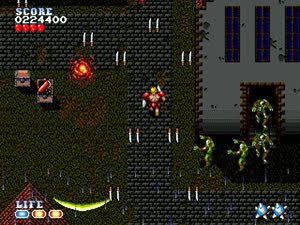 Besides the whole thing with the power-up and item chests, other difficult aspects I can name here are the boss battles (some of them will see you fighting for minutes before they break down), the initial slow speed of the character and the lack of familiarity with the shield defense, which is something rather unique for a shmup (almost all enemy fire can be blocked, you just have to remember that!). Even with all these quirks, Undeadline's difficulty doesn't live up to the hype created by all unaware reviews I read out there. It's not even close to the challenge provided by games like Hellfire, Twin Cobra or Truxton.

I had a NO MISS 1CC run on NORMAL going through the route Ruins, Forest, Rock, Cemetery, Cave, Drains and Castle. Experience points went all to ST and AG in a 2 to 1 ratio from start to finish, which I think gave me enough speed to face some tricky bosses and also provided me with enough power to handle the Castle stage without being easily overwhelmed. Here's the score: 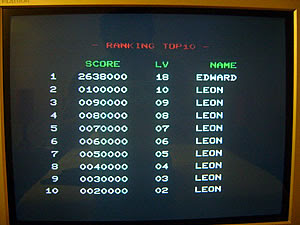