The Sega CD wasn't received with great reviews when it came out back in 1992 (1991 in Japan), mainly because people were expecting a huge leap in graphical quality from what they were used to when playing the stand-alone Mega Drive. Sol-Feace was a shooter that appeared amidst the first batch of Sega CD games and, just like Earnest Evans or Heavy Nova, was severely criticized for its overall lack of graphical innovation and an alleged failure in taking advantage of the Sega CD's new capabilities. This was extremely unfair to the game itself, in fact a very decent shmup that fell victim of an undeserved bashing that still hurts the game's image to this day.

Being true to the fact that Sol-Feace was no step up from the Mega Drive's standards, Renovation released Sol-Deace almost at the same time in cartridge format only in the US. Excluding the chip soundtrack and the absence of cinemas, it's exactly the same game. However, if you dig deep into it you'll notice that the cartridge version actually plays better than the original CD game, since they fixed some slowdown and flicker problems in the cart while correcting a couple of "Engrish" texts shown in the beginning of each stage. In fact, the most correct info is that Sol-Feace was an original Sharp X68000 title launched in 1990, which makes both the Sega CD and the Mega Drive versions secondary ports. 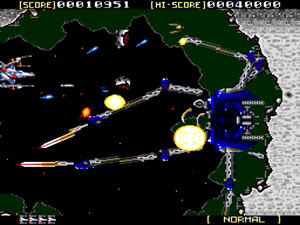 Forget for one second the cursed Sega CD heritage Sol-Deace has and start playing it. Most of the time people will admit it is a fun shooter. And for me, even though the graphics aren't overly superior to the stock games available at the time, they are still awesome and strike my 16-bit taste as being very well designed. The high scrolling speed of the 3rd stage and the spaceship race of the 5th stage are some of the highlights in this regard. I enjoy the way some enemies move - like the swinging arms in stage 2. The 4th stage sees you battling a giant enemy ship and provides a fight against a Gradius/Salamander type boss. You can call it derivative, but the variety that's present in the rest of the game definitely suggests otherwise.

With a simple gameplay concept, Sol-Deace is very easy to just pick up and play. First of all, you only use one button from the controller (A, B or C). You start every life with just a pea shooter, but soon a capsule comes and delivers a power-up when shot. The first and main weapon is a blue vulcan that equips the ship with upper and lower turrets. These can can be opened up to almost 45° when you stop firing - once you have the desired firing angle, just shoot and they will stay where they are. Later on two new power-ups will show up: the missile launcher and the laser. It's possible to combine all of them by touching the power-up icon conveniently: if you touch it with the lower turret, only the lower turret will acquire the power-up, while the other ones remain unchanged. It would seem that the best options are always triple missiles (because the missiles are stronger), but that's not actually the case. 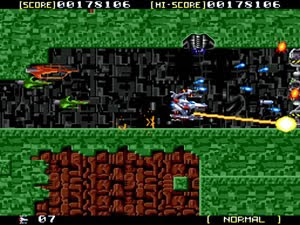 Going to the options screen lets you choose how fast you want your ship to be during the whole game, out of 3 speeds available. I don't know why it could not be implemented in-game, but it didn't affect my performance that much (I only use middle speed). While front collisions with walls will kill you, side collisions will just have you bouncing forwards in a very neat effect.

Sol-Deace is very generous when it comes to lives, for you start with 5 and earn lots of extends just by scoring. Don't expect a walk in the park though. It's not rare to lose lots of lives in a row during a difficult part or during boss confrontations. The 6th boss is a perfect exampe of a piss-inducing prick capable of depleting all your stock in a snap, so try to get there with at least one missile launcher.

One thing with which you can't go wrong in this game is the soundtrack. The music is excellent and keeps your blood pumping during the whole time. It's pure Wolfteam goodness from start to finish - courtesy of Motoi Sakuraba, composer of other great soundtracks like El Viento, Granada and the aforementioned Earnest Evans. In the end what you get is a fast and fun shooter that is much better than what most people like to admit. 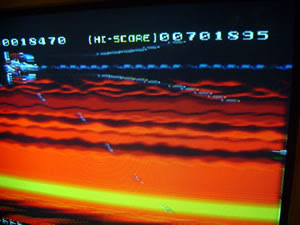