Radirgy was released for all main home consoles when Milestone decided to port it from the arcade. A while ago I decided to face the Dreamcast version, and now the Playstation 2 port got my attention in between my sessions of Mushihimesama. I still feel awkward when I think about the differently titled Radirgy Precious, even though I know it's the exactly same game. I practically had to sweat a lot less than I thought I would, but more due to how bad the game plays instead of how well I already knew it beforehand.

I will not go into gameplay details, for they were already covered when I wrote about the Dreamcast game. Check it out if you want some insight on the subject. The important thing to know is that in Sony's console the game core is exactly the same, from enemy placement to bullet count.

But why is the PS2 version so inferior if we're talking about the same game? Why do I still prefer my Dreamcast disc a hundred times more than the PS2 port, even if the PS2 edition comes with some new modes that should please those who value extras? 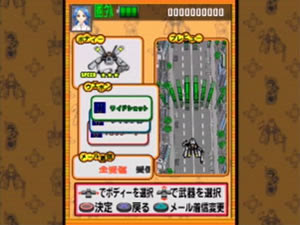 There are a few decisive things that really stand out in how badly accomplished Radirgy Precious turned out to be. The first one is graphics. I don't know what happened to Milestone, but the softened PS2 graphics look like shit when compared to the Dreamcast's crisply rendered sprites, both in YOKO and TATE modes. Of course you'll never notice this if you haven't been exposed to the Sega machine version, but right after I beat Radirgy Precious I fired up my Dreamcast just to check what I remembered to be a much better quality overall. And boy I was stunned... And deeply sad for my peers who have only the PS2 version to play.

The second disappointment with the PS2 port is the awful slowdown. It hurts the challenge beyond what's considered reasonable for a game to slow down, be it from programming concepts or hardware limitations. I'm not an expert on the subject, but it's hard to admit Milestone would do this on purpose. That's why my bet is this was indeed an outcome of bad programming, which in fact resulted in too much raw stuff for Sony's console to handle. Come on, we all know the Playstation 2 could do much better than this. The worst slowdown situation happens if you decide to use the green vulcan weapon - the game seems to almost come to a hault during the last stages! 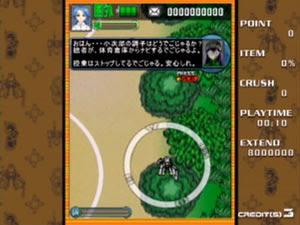 New to the main game itself is the side display of points (?), items collected, enemies crushed, playtime and a counter for the score left for you to get an extend. Each playthrough gets a password in the end, but I have no idea of its purpose. After you beat the game you unlock a Score Attack Mode, which is very useful for training. Besides that, the package has the new Okawari Mode, which is basically a much harder game with faster and more bullets and no continues.

If you can cope with the worse graphics and don't mind the slowdown, Radirgy Precious will keep you entertained. After all, the gameplay remains the same although it's easier than its Dreamcast sibling (I would love to check the Gamecube version one day to see how it compares).

My high score with the laser mecha is shown below: 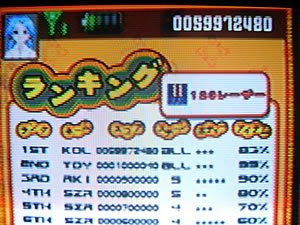