Collectors are a strange breed indeed. I am one of them, and I know that my hobby sometimes makes people around me wonder if I'm too wound up in this neverending gaming infatuation. You realize that things have reached a new plateau in your collecting habit when, as a shmup collector, you get to the point where you can say something like "I own Darius Alpha".

I say that because Darius Alpha is not only the rarest PC Engine game ever released, but also one of the rarest games ever. It was manufactured in extreme low quantities in Japan, being granted only to those who purchased both Darius Plus and Super Darius and mailed the publisher the attached special coupons. In result, there are only two categories of people who would be crazy enough to go after it these days: the hardcore collectors (the ones who don't collect to play but buy as an investment instead) and the hardcore Darius lovers. Those who have read some of my takes on the series will immediately know which category I belong to, so it's unnecessary for me to once again pledge my appreciation for everything Darius. 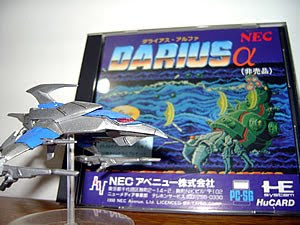 Tiat Young isn't in the game, but pays a visit to represent Proco Jr.

Forget about branching paths and space/sea environments here. This game is simply a boss rush, a progression of 16 straight boss battles based off the engine from Darius Plus. Presentation is bare bones, with just a title screen that alternates with the high score table. The Silver Hawk starts its journey with no power-ups, but these are automatically applied to the spaceship after each defeated boss, first in sets of 3 but soon in sets of 1 orb for each power-up category (missile/bomb/arm). I would've loved to see the names of the bosses appear on the screen as in other Darius games, but here you don't even get the famous WARNING messages. Shoot, kill, power-up, repeat. Simplicity is inversely proportional to how rare the HuCard is.

I had no trouble at all beating Darius Alpha. In my first run I was stopped by My Home Daddy, a creature that's as nasty as its stupid name. In the second run I cleared the game without dying, taking advantage of my previous experience from playing the other ports of the original Darius. I guess it isn't that easy for someone who never played them, so I don't feel all comfortable in calling it a walk in the park. Darius fans will certainly devise a higher fun factor than casual players, but even for them the experience should feel short and nothing more than an extremely expensive guilty pleasure. There's no difference in audio, however owners of the Supergrafx console are supposed to see graphical improvements when running the game. 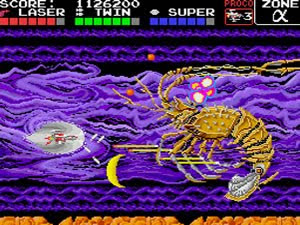 The battle against the almighty Tough Spring

Let me now share some of my thoughts about the bosses:
As usual, don't take too long to beat any of the bosses, or you'll be disturbed by the homing rotating cubes.

Besides the main game, Darius Alpha offers a time attack "pseudo-caravan" mode of 4 minutes. It's activated by pressing SELECT instead of RUN in the PCE controller, but it's sort of pointless because there isn't a separate high score table for this mode. My high scores are shown below, both for the main game (table) and for the time attack mode (to the left of T- 0:00). 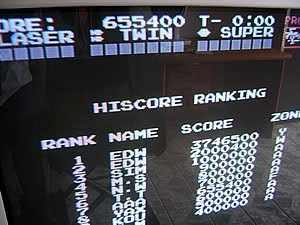