When shoot'em ups for the new generation of video game consoles (namely the Xbox 360) began to finally trickle, things only gained full steam for me when I laid my eyes on Deathsmiles. It had been a long time since I was instantly blown away by any video game as I ran it for the first time, solely on the merits of how good the game looked. For someone who doesn't have any access to the world of arcades, it was nothing less of stunning.

Horizontal shooters allow for a far deeper and more intricate game design, and Cave's renowned expertise really stands out here. The original arcade incarnation is included in the Xbox 360 port, but the top cream of the game are the new modes, which were properly revamped to high definition standards and look amazing on an LCD screen. As a lovely take on a gothic halloween theme, Deathsmiles delivers a great, intense and at the same time light-hearted experience that's aimed both at casual/novice and hardcore players alike. And that's probably the best thing Cave managed to accomplish while developing the game. 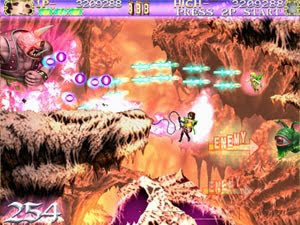 Rosa makes her way through the volcano stage (C2)

Four teenagers (lolitas for the initiated) battle in 7 or 8 stages to rid their world of hordes of devilish creatures. Their ages vary from 12 to 17 (Casper, Windia, Follet and Rosa), and their strength and firepower are very distinct from one another. Each one of them flies with a familiar, a small creature that plays a very important role as it adds to the firepower and absorbs some types of bullets. The girls shoot both ways (left and right), varying the attacks between button tapping (shot) and button holding (laser) - the familiars behave differently according to this, as does the character's speed (Casper and Rosa have shot = fixed familiar and laser = free/moving familiar, while Windia and Follett are the opposite). The only part of their bodies that can be hit (the hitbox) is their glowing and pulsating heart. When colliding with an enemy they'll lose only half a life, while incoming shots will take a full life cell. Maximum life stock is 5, which can be achieved with the extends on 20 and 45 million points, but there are also life replenishers that can be triggered inside the stages. Each life comes with 3 bombs/spells, and extra spells can also be obtained in the correct stages.

Certain enemies drop items that add to a counter on the lower left side of the screen. By pressing both shot buttons the familiar performs a lock-on attack and homes on enemies while the counter decreases. However, if the counter has hit 1.000 and this attack is performed, the character enters the "power-up" mode. Once in this mode the player remains invincible against enemy collision, while the counter goes down - however, its instantaneous value is first buffered and then increased with the new items released by all enemies. When this hidden counter reaches 10.000 you enter "fever" mode and your score will skyrocket with all those golden crown items. Power-up/fever mode ends when the item counter reaches 0. 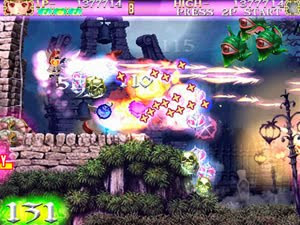 Suicide bullets come towards Windia in the graveyard stage (A2)

Now here's where the game starts to show its intrincacies: besides letting you choose the order of the 6 initial stages, Deathsmiles also lets you choose with which rank you want to play them, from levels 1 to 3. Higher rank means a higher difficulty, but also more enemies and more scoring opportunities. Sticking to rank level 1/2 is the way to go for starters while, on the other hand, playing only on level 3 will activate "death" mode. On the 5th stage played on rank level 3 suicide bullets will appear from each defeated enemy. That's when the familiar comes in handy, because it absorbs the suicide bullets and by doing that also increases the item counter. Yes, Cave did find a way to include one of the trademarks of their second loops for the hardcore people! After completing the 6 initial stages, you're offered the option to go straight to the last level or to go through the Extra stage. Going straight to the final stage with no death mode is the way for starters, since playing Extra adds +1 to death mode difficulty. That means if you already have death mode active after 6 stages, you'll enter Extra in death mode level 2, facing the last stage in death mode level 3 (with ludicrous amounts of suicide bullets!). Going into Extra with no death mode activates death mode level 1 and a final stage in death mode level 2.

The action is relentless, with creatures and bullets coming from both sides all the time. As I mentioned, the game will definitely please non-hardcore players with the implemented rank selection. It seems complicated, but after just a few plays you'll see it's definitely not. My goal was to achieve the 1CC with the Extra stage, and in my quest I stumbled upon two learning phases. The first one was getting used to the suicide bullet swarm of the last stages (with the aid of the useful training option). Once this was out of the way I started playing for the 1CC, but then I got greedy and had to learn or refine my gameplay even more, since minor details affect a huge deal of the scoring.

Here are some of the greedy stuff you're likely to come across by yourself:
That's enough for gameplay! For an extremely detailed description, the best source is this wonderful page.

Saying that Deathsmiles is reason enough to purchase a Japanese Xbox 360 is no understatement. It's beautiful, has a great soundtrack for its theme and will definitely provide endless hours of fun. Additional modes include versions 1.1 (a much more difficult game with different controlling aspects) and MBL (Mega Black Label, a downloadable version with an additional stage and an additional character, Sakura, boss of stage B2). The package is rounded up by a good deal of options for special adjustments, online play and replay saving, and the limited edition of the game includes an arrange soundtrack CD.

Here's my high score on the Xbox 360 mode, default difficulty (2), playing with Rosa in initial route B1-B2-A1-C2-C1-A2. B1 and A1 were played in rank level 2, with all others in rank level 3 and Extra stage included. The best thing about it is that I feel I can still improve a lot! 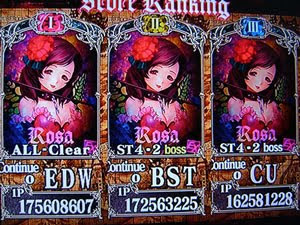