There are certain games that are capable of warming our needy hearts regardless of time, setting or platform. No matter how long you've been away from them, when you play these games you are transported to a very particular oasis of fond memories and undeniable fun. Zero Wing is such a game for me, one that every so often I insert in my Mega Drive with the volume in my speakers cranked up above 20. After all, having the earphone jack plugged to a stereo system is the way to go for those who have a model 1 machine, for the music in this title is in my opinion one of the best ever made for any video game.

Reasons for why I have Zero Wing in such high regard aren't restricted to music. Going back in time, it was no wonder that this game caused a strong impression in my still incipiently shmup-oriented mind. Subcounsciously I was already hooked, and while still playing platformers and racers I was constantly drawn to this rocking shooter and its punishing difficulty (for a 15-year old teenager, mind you). Besides the awesome soundtrack, the graphics were great, the weapons were extremely cool and the overall feeling of cruising through the vastness of outer space was conveyed like few other shooters managed to accomplish at the time. Take the 1st stage, for instance (Natols - all stages have names!): you take off of an exploding mothership, blast your way through a surface base, face a creepy skull mid-boss and end up fighting a whale-like boss, all of that to the sound of great pumping shmup music. It's an easy level alright, but it sets the tone perfectly for the more difficult - and awesome - stages to come.

Further stages are also preceded by their proper names: Legrous, Pleades, Aquese, Submarine Tunnel, Barricade Zone, Bellon and Gerbarra. Don't they all sound like cool names for stand-alone games? They feel very different and unique and, despite having a slow scrolling speed, the action is never boring due to the decently varied enemy design. I absolutely love the music in Legrous and Submarine Tunnel, but all BGMs carry a top notch pumping rock aura (this is no techno, I don't know how some people have come up with this) that even surpasses the original tunes from the arcade version or, in most cases, from the music found in the PC Engine CD port. Yes, it's that amazing. 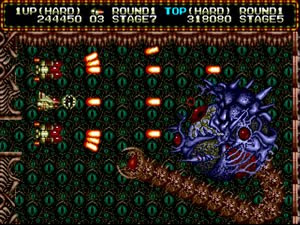 Facing the boss of the 7th stage - check out the super vulcan power-up!

There are 3 weapons to choose from: the red (vulcan), the blue (laser) and the green (homing). They can be interchanged with the appropriate icons left by destroyed carrier ships, and after collecting the first one (the red, not the blue/green!) two pods will materialize above and below the ship. They are an essential part of gameplay, as they increase the ship’s firepower and absorb all bullets, automatically squeezing in tight passages. Sticking three times to the same color will upgrade the weapon to its full power. Further icons of the same color are worth 5.000 points or, in rare cases, 1UPs, 2UPs or even 10UPs (seriously, I got this one a few days ago). A speed-up icon appears after each power-up cycle, being occasionally replaced by a sphere that works both as a front shield and as a bomb that can be tossed onto enemies with the B button. Normally the B button works as a tractor beam that's used to capture small and mid-sized enemies, latching them to the front of the ship. These captured enemies can be used as 1-hit shields or just tossed away as you will, but beware of heavier hijacked craft/objects - their increased mass will pull the ship down!

With a default difficulty set to EASY, it's necessary to go to the options in order to activate NORMAL or HARD. Following the trend of its time, Zero Wing is checkpoint-based, thus presenting some rather harsh sections in later stages. They will make you angry but at the same time a lot better in dodging enemy heat-seeking missiles. Though difficult, the overall challenge does not reach the extreme heights of Hellfire, also developed by Toaplan at around the same time.

I have come to the point where I can say I know Zero Wing inside out. I have memorized every single section and strategies in the NORMAL setting, being able to recover even if I die in the hardest possible checkpoint. However, I still don't know how to trigger the super-mega-power-up that materializes randomly. It's a big pink pulsating icon that increases the pods to 3 times their size, gives the ultimate final upgrade to the ship and boosts the blasting fun to the stratosphere. You can play the game for days without getting it and then, all of a sudden, the damn thing just falls in your lap when you least expect it.

The one thing I finally grasped when having this last gaming session was how to achieve a monster score in the first loop alone. As much as it hurts my feelings towards the game, I have to admit that this spoils the immaculate brilliance it once had before my eyes. I refer to the fact that the gameplay is broken in the last stage. Die in the last boss before the final pod leaves the screen and play the last checkpoint again. Each time this is done you get approximately 200.000 points, which also means 2 additional lives (first extend with 70.000, then one for each 100.000 points). I don't know if this is inherited from the arcade original, but you can counterstop the Mega Drive port by doing it.

If you're still reading this and wondering why I didn't write a word about the ALL YOUR BASE ARE BELONG TO US meme, that's because all my glory days with this game were spent with a Japanese cart. I wasn't aware of the Engrish debate over Zero Wing until much later in my life, and it irks me to see so much incongruent bashing of people who will dismiss this incredibly fun game based on this AYBABTU crap alone. Come on, you play a shooter to blast and explode stuff, not to gaze upon an intro (a cool one, but just an intro anyway).

I died in the last stage and took advantage of the last boss to see how many points I could get with each checkpoint. Funny thing is that when I decided to move on he gave me a hell of a beating! The game was played in NORMAL until stage 2-5 (in that section with those impossible blue tanks). 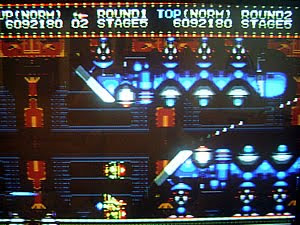