Very few shmups inspire such fear in people's hearts as Gaiares for the Mega Drive does - or at least this is the impression you get when you read most reviews written on the game since its release in 1990. I was always remembered of how controversial it is regarding its awesomeness or its overrated status among those who played it, and finally decided to see it for real after receiving a few inputs from some fellow shmuppers. Keep reading if you want to know how it went.

As I was playing Gaiares it was inevitable to relate the game to two other Renovation titles, even though they were originally published by other companies: Arrow Flash (Sega) and Whip Rush (Vic Tokai). It's a bit awkward to explain why these 3 games represent an unnoficial trilogy to me, one that starts with the somewhat disappointing Arrow Flash, improves but still presents rough edges with Whip Rush and then reaches full potential with Gaiares. The Renovation tag on them is the first obvious reason for this, but I do think these games (all Mega Drive exclusive) are graphically and musically related, with unexpected similarities in stage/weapon design. 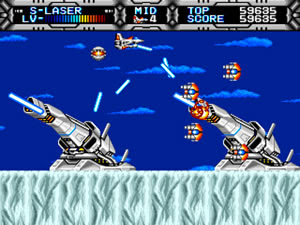 Two indestructible ground gunners on the beginning of the 2nd stage

From the story shown in the attract mode, your name is Dan Dare and you're out to stop the evil ZZ Badnasty's army in order to return the original green status to a destroyed Earth, and Alexis is the co-pilot lady that operates the "TOZ" system. This TOZ is the core aspect of Gaiares - a feature that allows you to throw your single option (one that follows the ship around and absorbs bullets) on enemies to mimic their weaponry on your own ship. The possibilities here are many, since there are over 15 different weapons to be acquired. Moreover, each one can be powered-up twice by using the TOZ again on the same enemy. The greatest sort of fun here, and in some cases of stress, is to figure out which weapon serves best for each situation, and the important thing is to try to steal weapons from everything that moves, even bosses or mid-bosses. Combine this with the selection of 3 very distinct speed adjustments and the availability of shield icons spread throughout the stages and you're ready to face the increasingly difficult barrage of baddies.

It takes some runs to see what Gaiares has best, but after you've been sucked into the gameplay there's no denying it is a strong and addictive 16-bit shooter. I don't find the first stage to be that appealing: the graphics aren't special, nor is the music. The music in the second stage still isn't that convidative enticing, but the challenge picks up a little. Finally by the 3rd stage the game reaches full load, with an awkward but very pleasant graphical mix (massive black holes followed by a castle with guillotines, deadly pendulums and fire-spitting wall gargoyles) accompanied by a great pumping BGM. When you notice that the music gets even better while you're fighting homing missiles, lasers and massive enemy crafts amidst all the exploding fireballs and ice debris that populate the whole 5th stage you definitely know you've got an excellent, if not downright awesome, shmup in your hands.

As far as horizontal checkpoint shooters go, this one excels in being intense and extremely versatile from a gameplay standpoint. And the best thing is that its difficulty cult status is a lie. It's not an easy game by any means, but I don't think it can be included into the hardest category either (try Hellfire or Truxton for some serious beating). Here go some reasons why:
You start the game with 5 lives, but there are absolutely no extends while playing. My favorite weapons are the H-Laser and the T-Missile, but I also used the G-Beam and the S-Laser a lot. Another minor thing I found out is that those tiny missiles your ship fires can acquire a homing ability by absorbing a tiny ground enemy during the 1st stage. The secret weapon (acquired by throwing the TOZ at nothing 5 times and then against any enemy) resembles the Hunter weapon from the Thunder Force series, but it must be enabled in every stage (not an easy task in later levels) and isn't really that helpful.

I was able to beat the game on NORMAL without losing any lives, with the high score shown below. By the way, to access the options screen it's necessary to press either A, B or C with START during the start screen. 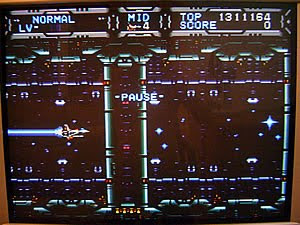