Despite being ignored by Nintendo during the majority of its lifetime in Brazil, the NES had a whole line of clones that filled in for the original hardware for a long while, with such names as BitSystem, Dynavision, Phantom System and Top Game, all of them coming from different local manufacturers. The Top Game in particular had a very early influence in my gaming formation, because every console package came with a 60-pin cartridge named Tiger-Heli. It was, as much as I can remember, my first shmup love affair with an NES setting, and the time has come to revisit this absolute classic from my childhood.

I believe I have digressed a few times into recollecting the reasons for why I eventually became a shmupper. Tiger-Heli was one of the few NES shmups I had the chance to play back then, simply because they weren't so popular or readily available in rental/retail shops, and maybe that's why it played such an important role in my shmuppy coming-out-of-the-closet process. After all, it ocuppied my attention side by side with NES heavyweights such as Contra, Battletoads and Mega Man, and was the first complete NES game I bought when I started collecting more than a decade later. 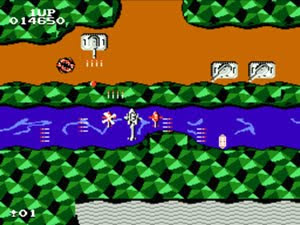 Two little helis increase firepower to the sides of the helicopter

Developed by Toaplan, originally distributed by Taito and finally published by Acclaim in the US, this enjoyable helicopter shooter is one of the genre's foundation stones. The transition from the arcade game to its 8-bit version is of great quality, as it does retain all of the original gameplay characteristics while adapting the aesthetics graphically and musically to the home format. Basically, you pilot a chopper through various scenarios (streets, city, ocean, desert, etc.) and shoot down terrestrial targets along the way. Interesting detail: no bullets are fired from the few airborne craft seen here and there. Bomb for more destructive effect and get "little heli" power-ups to increase firing capabilities. Please refer to my writing on the PS1 port for a deeper description of the gameplay, because it's exactly the same.

Some remarkable aspects of the NES port are the good use of colors (the game never feels washed out like so many other games for the platform), the improvement on the helicopter's speed (which moves a little faster than in the somewhat painful arcade game) and the nice music rendition. The screen is obviously stretched out for the regular TV aspect ratio, while the difficulty was toned down a lot, as there are in general less enemies to destroy and a considerably lower number of those tanks appearing from the bottom of the screen. All enemies present a defined interval between firing consecutive shots, during which it's safe to get closer and dispatch them. This interval decreases as the game progresses, getting really short in later stages of the second loop. To the player's advantage though, enemy bullets are able to travel only in 8 directions (horizontals, verticals and diagonals), so it's always feasible to herd bullets and do the killings during the shot intervals.

It's not due to nostalgia alone that I think this version of Tiger-Heli is better than any other out there, including the arcade original. It's a very basic shooter, in such a way that it fits the constraints of the NES hardware better than in the arcade or the PS1. In fact, it feels tailored for Nintendo's 8-bit machine. The original version is also too difficult up front, while the NES title only truly shows its claws in the second loop, providing for a more comprehensive and overall better challenge slope - something like "warm up during the 1st loop and fasten your seatbelt for the real thing in the 2nd". It does have everything that the original had, so one should expect no complaints for lack of faithfulness, missing key enemies or different extend settings.

The only gripe I have, at least with the US release of the game, is that it's got a bug in its score display. Whenever a credit is finished, both your score and your high score should be buffered to the start screen. However, after the 1st attract mode round is over, both the score display and the first digit of the high score are reset. If you managed to get 150.000 points, for example, your high score would then show 050.000 points. That's pretty annoying when you want to keep track of performance, so be prepared for it. I don't know if this also happens with the Japanese cartridge.

So here's my high score, game played until stage 2-3: 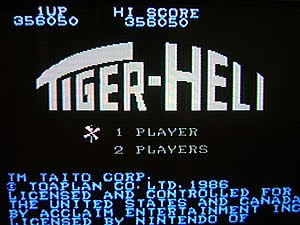