In the history of horizontal scrolling shooters there's not much to mention about Scramble, except the fact that it was the first one of its kind. The year was 1981, and a then unknown company called Konami released it in the arcades. It was a different experience from Defender, released roughly a year before, because it had forced scrolling instead of a free roaming horizontal screen, a concept that would soon become the standard in the genre. Scramble is also heralded as the embryo of the Gradius series, and some people even consider it to be the first game in it.

Japanese Playstation 2 owners were presented with a gift edition of Scramble through the first entry in the Oretachi Game Center series. It is actually an anachronism to have such a rudimentary game occupy a whole CD, even considering the fact that the purpose of the series is to recreate the arcade experience at home. As with all other titles in this collection, the game is accompanied by detailed colored manuals/folders that include info on the original arcade board, a music mini-CD (10 tracks with 10:28 of total time) and a mini-DVD with several ads for the 6 first games in the series, a music demo and a complete 1st loop run. The mini-CD features the only song in the game (the brief intro) plus all sound effects and 2 freely remixed tracks that incorporate lots of in-game sounds. It's a well rounded package, but if someone sees you playing the game and you tell them it is running on a PS2, people will just have a hard time believing it... Flying saucers populate a cave in the second stage of Scramble

Simply put, Scramble is just like an improved Atari 2600 game. What differentiates it are the little graphical variety throughout the stages and the impressive (for the time) array of sound effects. One could also see a glimpse of things to come on the gameplay front, given the fact that the ship fires two types of bullets, the main shot and bombs/missiles. No more than 2 of these missiles can be fired at any moment. They develop a downward arch with a trajectory that relates directly to the ship's movement, demanding certain aiming skills from the player in order to be properly used. There is a fuel bar that depletes over time and must be refilled by destroying the ground buildings marked with the word FUEL, and as the game progresses and loops this fuel bar depletes faster and faster, until it becomes impossible to be replenished.

Although the game is divided into stages, these are not separated by any intermediate screen or whatsoever. You just advance to the next stage/area as you play, and the active stage is shown in the status bar on the top of the screen. All areas are very short (a complete run lasts less than 5 minutes), and every area has its distinct environment and enemies. The colors change all the time in a seizure-inducing fashion, but after a while you get used to it. The final objective is to destroy the "base" in the final stage, thus completing the mission posed by the game, which taunts the player with the "How far can you invade our scramble system?" message.

Options in the PS2 game are accessed by pressing L1 + R1, and everything there is in Japanese. Here's the translation for reference:

EDIT FEB-2013 - Despite being horizontal, this game's native screen is of the vertical type. By default, Scramble for the Playstation 2 starts with a stretched horizontal display (see picture above), so in order to get it close to the original aspect ratio you need to mess around with the options a little (TATE included).

Scramble is also unique because there are absolutely no bullets shot at the player. You are not allowed to horizontally move beyond the screen centerline, but the danger only comes from the ground, from incoming flying craft/fireballs and from the environment itself. It's not as easy as it seems, believe me. Even though on the outside this game seems to be primitive beyond belief, I must confess I had fun playing it. Maybe because it's a title that perfectly serves the purpose of competition and high score pursuit. The only extend is given with 10.000 points, so no one is going to be playing it forever.


Full run of Scramble's arcade version, 1st loop
Note: the PS2 game doesn't have that KONAMI sign over the building in the last stage
(courtesy of YouTube user MamePlayer)

I was able to get my high score very late at night while I was a bit insomniac. The stage I reached was the 5th on the 5th loop (dumb death inside the maze). 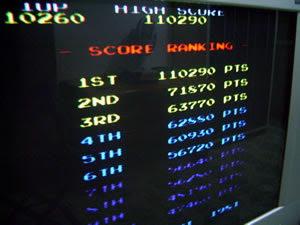