There must be some kind of theory that explains why someone would even bother to try playing D-Force, when there is a handful of quality shoot'em ups available for the SNES. As a shmupper, at times I lean towards utter masochism, so that's all I can think of as far as motivation goes. Or maybe I feel like I should be punished for not performing well in decent shmups, so I indulge myself in the enjoyment of enduring pain from time to time. I can't deny though that there's some odd sense of pleasure in emerging victorious out of such a dreadful experience. It means that (1) I'll never play this game again unless I'm forced to and (2) I'm now part of the strict club of people who beat D-Force. Yeah! Wanna join? Be my guest!

D-Force is an early SNES title that was certainly part of the Mode 7 flagship batch. Think about a basic vertical scrolling shooter with annoying Mode 7 effects that not only are superfluous to the game itself but also represent a test of the player's patience (there's nothing more frustrating than dying and having to uselessly WAIT to coin a new credit). When starting a stage, the helicopter takes off from a ground base with - aham - a "glorious" scaling effect. And when the last life is lost, the screen starts spinning and the chopper spirals to death. While the first effect is rather harmless, the spiralling death sequence is just unnerving because it cannot be skipped, and is followed by some atrocious waiting time for the high score board. Damn, if I'm going to play this piece of shit, why do I have to even lose my precious time with all this waiting? 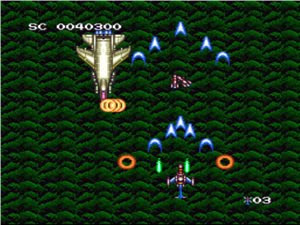 Fighting the mid boss in the 1st stage of D-Force

The rant in the above paragraph also stems from another aspect of the game, and that is cheapness. Until learning how to deal with the choppy scrolling and the weird hit detection, I died a whole freakin' lot. No kidding, there are times in D-Force where you'll see your life stock get depleted in a snap. Cheapness reaches its peak during later stages, and almost motivated me to start all over again instead of continuing for practice purposes. There are only 4 lives in a credit with no extends of any kind, but it's possible to increase the number of starting lives to 9 in the OPTIONS screen - a very handy resource for practicing. There's only one button to be used during the whole game. It fires a single shot that can be powered up quite a few times (red icons) and auxiliary side missiles which will be acquired at a certain point (green icons). When maxed out, all surplus power-up icons are useless, even for scoring. On the other hand, one of the few good things in this game is that you lose only one power-up level when dying.

In order to drift away from the whole Twin Cobra obvious reminiscence, D-Force makes an attempt at something new in the way even stages are arranged. These are deemed as "exploration" missions, where you'll be flying in two different heights that can be alternated with the shoulder buttons in the controller. Some enemies will be in the higher plane, while others in the ground level. It's a neat concept, but it doesn't add that much substance to the game. After all, these stages are too easy, and the bosses are a joke. To the player's astonishment, they're also populated with dinosaurs, phoenix birds, centaurs and mythological labyrinths. The explanation for this is that the middle eastern nation you're fighting against has been conducting some nasty research to develop new creatures to conquer the world. Maybe this is the reason why in Japan the game is called Dimension Force? Well, at least this gave me a good laugh.


The sand ripple effect isn't really visible here, but everything else is
(courtesy of YouTube user KamilDowonna)

D-Force is underwhelming in every possible way you can imagine. Graphics are subpar and don't do justice to the SNES at all. The ripple effect on water and sand (which I believe is done with Mode 7 as well) is visually distracting and requires getting used to. Music can be catchy sometimes, but is overall soaked with cheesiness. Watch out for a special take on the French national anthem in the start screen. Here you can also choose to play only the regular "shooting" stages (missions 1, 3 and 5) or only the exploration stages (missions 2, 4 and 6). This means the 7th and last stage can only be played in the main game. Strangely enough, I should also point out that missiles are not fired during exploration missions, and I just can't figure out why.

As hard as it is, this is a game that will bow down to anyone armed with some memorization skills and a great deal of patience. I exhausted mine when I beat the game in my last life. Therefore, the 1CC objective was proudly achieved on NORMAL with the score shown below. 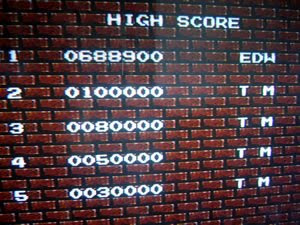