Joining the glut of generic horizontal shooters that emerged during the shmup boom of the 90s we have yet another one: Power Gate, a rather poor game that will forever remain in the shadow of any other similar title of that era. Nevertheless, the fact that it's one of the most underwhelming shmups in the PC Engine library doesn't mean it's downright unplayable. Poor graphics and music can be somewhat forgiven, although having a gameplay that's free of severe flaws is not enough of an excuse for being so slow and ultimately so easy.

Following the trend in the majority of the PC Engine shooters, Power Gate has absolutely no options or ways to adjust the difficulty. The game unfolds at a very relaxed pace, and takes its time into really demanding something from the player. In later levels the screen does get crammed with enemies coming from all sides, with some very narrow and claustrophobic passages to boot. Other than that, the feeling of cruising through waves and waves of planes, helicopters, bombers, rockets and stray missiles is prone to put adrenaline-hungry shmuppers to sleep. Your bullets, for instance, move almost as fast (meaning slow) as your jet fighter! 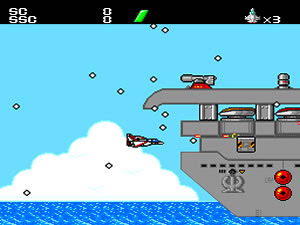 What? A huge battleship has approached fast!

There's only one type of shot, and that's of the pea type. It will have its power increased maybe once or twice with the appropriate icon, but it will never change into something that doesn’t resemble a pea type shot. Eventually ground bombs/missiles will be acquired and appended to the main firepower. The other button in the controller is responsible for triggering special weapons, which come in limited quantities according to distinct icons: there's a frontal missile crush, a bomb that has an 8-way explosion effect, a protective circle that depletes itself as enemies hit it, a strange sort of locking/homing weapon and the very effective but temporary shield (it makes the plane invincible to everything except walls). Which special weapon is to be used has to be chosen with the SELECT button. In addition, every 5 or 6 seconds the act of pressing SELECT will also cause the jet's thrusters to light up, a useful graphical detail that can inflict damage and block enemy bullets. As for the rest of the incoming icons - which are always released by red or blinking red enemies - S provides the speed-up function, D represents speed-down and E replenishes one point of the health bar associated to each life.

With the presence of this health bar and all the extra lives gained with 20.000, 50.000 and then for every 50.000 points afterwards, it's no surprise Power Gate ends up being extremely easy. Stages 4 and 5 have no bosses, maybe as a compensation for their long duration. They're not missing much, simply because all existent bosses - including the last one - are complete pussies. Some stages will scroll up and down according to the scenery, which is cool and adds a bit of variety. The music, however, is quite limited and repeats itself more than once. At least it's not boring or annoying...

During gameplay, the upper display shows not only your current score (SC), but also the in-stage score (SSC). I have no idea why the developer did this, since there's no special scoring aspect of any kind. Maybe they tried to do something but eventually dropped it, as indicated by everything that's shown regarding the remaining special weapons when a stage ends.

My 1CC high score in Power Gate is shown below. Upon completion, the game halts in this "clear score" screen. If by any chance you think this game is worthwhile despite its simplicity, you can also go for the remake/sequel released for the CD add-on in 1992, called Hawk F-123. 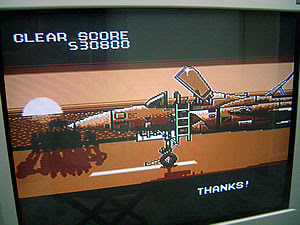