Before even laying eyes on this game, I'm quite sure everybody has his/her own idea of what a shooter named Psycho Chaser should be like. I wonder if the title shouldn't have been Psychic instead of Psycho. After all, is the main character a psycho or are his targets the psychos? For such a suggestive name, it's a bit underwhelming to find out we're just talking about a rather tame vertical shooter that doesn't really offer anything to raise itself above its PC Engine siblings. Maybe its most unique aspect is the main character, a bulky android that walks relentlessly in his quest to destroy all types of weird creatures in a series of awkward settings. At first I was impressed by his size, but the developer was clever enough not to turn the game into another "huge hitbox suffering fest". With a challenge level that's not over the top, Psycho Chaser plays fine enough and for a checkpoint shooter it isn't that punishing at all.

The overhead animation frames for the robot are quite nice, and while he moves slowly it takes just one or two speed-up icons for things to get pretty much leveled up in the gameplay department. You can take as many as you want because it's impossible to get too fast, but beware of the yellow speed-down icons that start appearing more frequently as the game comes close to the end. Right from the get go the player is allowed to switch between four available weapons, in a mechanic that is exactly identical to that of Toaplan's Hellfire. As such, success in the game relies heavily in mastering how these weapons work and how their cycling order is established. Fire is the default forward shot, Multiway allows some backward shots, Buster is the side shot and Thunder activates continuous homing lightning bursts. 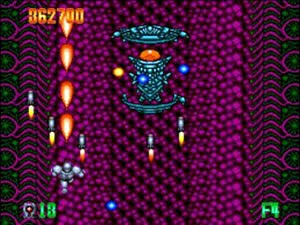 One of the several undescribable opponents from Psycho Chaser

In order to power up the android it's necessary to collect those orange shaped icons that look like diamonds. They're not worth any points, but the more of them you collect the more "psycho" energy bits will be available at the end of the stage for you to distribute across all types of weapons. Once distributed, these power-up units can only be rearranged if you die during the current stage, since they remain permanently applied when the next stage is reached. The current power level for each weapon is displayed in bottom right corner of the screen. As a rule of thumb, I think the upgrading priority should go to Fire and Buster, for these were the weapons I used the most.

Other incoming icons you might encounter are the missile upgrades (which will add up to 6 very helpful side missiles), temporary invincibility (a dark orange symbol that changes the robot's color into a darker shade as long as invincibility lasts) and the awesome ultimate upgrade (an exclamation sign). This exclamation upgrade is very rare and I've only seen it appear during the 3rd and 5th stages. Sometimes it does, sometimes it doesn't, and I couldn't figure out how to properly trigger it. Getting this upgrade will double the range and strength of all weapons: Fire will have two forward streams instead of one, Multiway will turn into an 8-way shot, Buster will have two horizontal side arches instead of one and Thunder will generate two lightning bursts instead of one. There was one icon whose function I could not grasp during all the time I spent playing Psycho Chaser: it's the one that looks like the invincibility symbol but in the green color. Leave me a comment if you know what it actually does!


Beware of the psycho robot!
(courtesy of YouTube user KollisionBR)

Sound effects like explosions and beeps are taken from the regular stock that most of the shooters in the PC Engine seem to use. I think the graphics do the job in conveying the scrolling alien landscapes: skulls are carved on the ground of the entire 1st stage, boomerang shooting androids guard the main sections of the 2nd stage and green lizards try to block your way in the 3rd stage. The challenge picks up during the organic-like environment of the 4th level, and things get a bit hairy in the platform confined 5th area. The last stage has all bosses and some mid bosses returning for a rematch before you can finally face the game's final boss. Speaking of bosses, I have to say they're not in the same challenge league as the stages themselves, standing overall on the easy side. Some regular enemies have tricky attack patterns, but since most of them arrive in waves, knowing in advance how they will show up is a key factor in choosing the right weapon to welcome them. And beware not to get crushed by incoming obstacles.

Psycho Chaser's 2nd loop starts with no apparent increase in difficulty, but soon enough enemies will become more resilient, and bosses will finally start giving some tough fights. And unless you're equipped with the exclamation upgrade, there comes a point where the amount of on-screen enemies will start to overcome your firepower, with no hint of noticeable slowdown. I was able to reach loop 2-4 with the high score shown below. 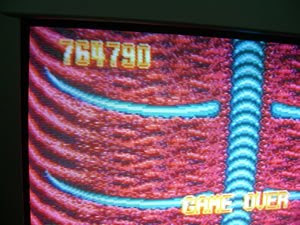 Sadly, I must warn you this is also one of those games with no score buffering of any kind.
Posted by Edward at 12:41 AM