At last! After several brief spells of playing this game I finally managed to beat it, and it feels good! Just to have an idea, I started dedicating myself to Homura in June last year, but I had to stop because I fell irrevocably in love with Mushihimesama. Unless it's purely for fun (meaning no compromise to the 1CC goal), I usually don't play two bullet hell shooters at the same time. So only recently was I able to resume and conclude the journey of the fallen angel who battles through the skies of ancient Japan. I believe that's the main story behind the game, since my copy is the Japanese one and I understand bollocks of this language. European gamers were lucky enough to receive a port with translated text though, and these are the two options to go if you want to play Homura on the Playstation 2.

This vertical bullet hell shmup bears great resemblance to several other games. Psyvariar is the obvious first mention, since developer Skonec is involved with both titles. Gameplay mechanics are akin to the Giga Wing series, but the game is aesthetically much closer to Shikigami No Shiro. Apart from a few bosses, there are absolutely no ground targets, and that feeling of detachment of foreground to background is there throughout all stages. That's why you'll only notice any beauty or detail in the backgrounds when you see someone else playing the game. While playing you'll be much more worried about surviving and scoring. To be honest, upon a shallow playthrough Homura comes out as a rather unimpressive experience, be it for its lethargic initial pacing, the lack of flashy explosions or (in the case of noob reviewers) the ease provided by timely awarded extra credits and subsequent credit feeding the game to the end. This image, however, changes drastically with a few further runs, and a whole new shooting scenario reveals itself to the player. 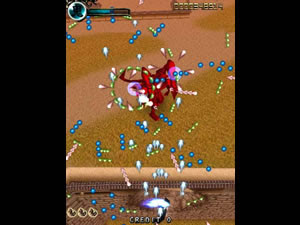 One of the several phases of the 1st boss

As a sort of angel, you have the abilities to shoot and to use your heavenly sword to get rid of the bad guys. Whenever you shoot, the angel moves a little bit slower. Slashing with the sword can be done in two ways: (1) close to an enemy - when the character will enter a kind of berserker mode and slash all enemies on-screen no matter how large they are, with the obvious exception of bosses, in a move that most players call "mad-dash"; (2) at a safe distance from any enemy - the slash will deflect all surrounding bullets, which in turn will damage all on-screen enemies. On both types of slashing you get a brief window of invincibility (approximately 1 second) as soon as it ends, and only 5 seconds afterwards will a new sword slash be possible, as indicated by a very recognizable sound and the return of the character's surrounding aura. All defeated enemies release gold coins for points. When doing a mad-dash the coins are automatically absorbed by the player, but you have to collect them after bullet slashing or bombing (see below). A blue bar in the upper corner is filled as these coins are collected, eventually adding two bits of energy to the character and substantially increasing his firepower.

End of stage bonuses aren't nearly as substantial as the points you can get during normal play, where the secret to higher scores really lies: the mad-dash. Whenever a mad-dash is carried out, all killed enemies will result in a multipler combo value (for instance, 10 enemies results in a ×10 multiplier). This combo value will decrease 1 unit for every 5 seconds, until it reaches zero. If a new mad-dash is made before that, half of the current combo (rounded down) is added to the new amount of enemies killed from this new mad-dash, resulting in a new combo value. That's why the more enemies are on-screen when you slash the higher the combo. Having a high multiplier and mad-dashing just a few enemies drastically reduces the combo value. Therefore, more than serving the purpose of panic evading, the mad-dash has to be done very selectively in order to not compromise the pursuit of higher scores. Let's not forget that bullet slashing is also important for scoring, since slashing a dense bullet/laser/fire stream will yield big point chunks.

The last aspect of the gameplay is the bomb. Contrary to the norm, it doesn't work like 98% of the bomb functions in the shmup world. In order to trigger a bomb you have to press both shot + slash buttons at the exactly same time. Keeping the shot button pressed and then pushing the slash button will just result in a slash. The PS2 controller has the bomb command mapped to the R1/L1 buttons, but even so you have to release both shot + slash buttons in order to use it. This is somewhat annoying, and definitely takes some time to get used to. Bomb stock is also implemented in a weird way. Whenever you die you don't lose the bombs in stock, being awarded an extra bomb instead. Since a credit starts with 2 bombs, the maximum number of bombs that can be used is 6 - if you get down to the last life and you're able to get the 2 extends, given with 150 and 300 million points. Slash recovery is independent from bomb usage, so be prepared for this during those dense bullet curtains from the last stages.

During the game, a decision point awaits halfway the first 3 stages, where the left one represents the EASY path and the right one the HARD path. Enemy arrangement is different in each one, but ultimately you'll reach the same stage boss. The 3rd stage HARD path is only accessible by letting the mid boss survive and timing out the fight. Credit feeding will allow you to see only 4 stages, and facing the true final boss in stage 5 requires getting there on a single credit.

Homura's graphics might not be the fanciest around, and the movie-like gloomy soundtrack might turn some people off (I personally love it, as well as those green slimy boss explosions!). Nevertheless, after everything is learned there's no doubt this turns into a very fun game. Like all good late shoot'em ups, it keeps you coming back for more. The challenge slope as the game progresses is one of the best I've ever seen, practically forcing the player to use all of the twitch and bullet herding techniques he/she's got. Gameplay intricacies demand a huge deal of memorization and absolute focus for anyone to succeed. I really appreciate the fact that Homura doesn't punish you that much for dying, and how there's always a better way to get that higher combo, to go unharmed through that seemingly impossible bullet barrage, to polish every single section to a better degree of strategy.

I only wish there was a stage select option in the disc. If it was there it would make it easier for everybody to reach the end, and I would certainly try to improve my approach on the 4th stage. For me it's counter-productive to keep playing over and over again just to try and see the results of new strategies so far into the game. It's still a lot of fun, but I feel I should move on to the next challenge. So for now I wrap my 1CC performance in Homura with the high score below, playing on NORMAL. Route choices were EASY-HARD-HARD and the maximum combo was 66. 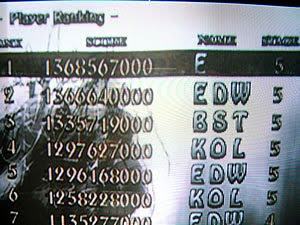