Shmups are by definition a relatively simple genre with solid, etched-in-stone rules that are unfortunately also a grounding for the noobish belief that these are stagnated games, with little or absolutely no room for innovation. However, every once in a while there comes a game whose content fiercely defies the norm, expanding the established standards in ways rarely or never seen before. Shoot 1UP is one such game because it subverts one of the well known genre foundations - the 1UP, also known as the "extra life" - in order to provide a fresh new look at how a shmup should be played. In essence, here you don't control just one single ship. In Shoot 1UP you control your whole spaceship stock in a massive destructive phalanx.

In a great number of shoot'em ups the extend or extra life is the most cherished prize you can get from the game, above power-ups, speed-ups or whatever upgrades you might get for the ship. Sometimes remaining lives will be converted into valuable points upon game completion (Mushihimesama original), sometimes they're necessary for that last stage or final fight against a dreadfully cheap last boss (Acrobat Mission) and sometimes they play an integral part in the game's strategy (Battle Garegga), but mostly it's just damn good to know we've got that extra chance that helps us go the distance. The good news is that in Shoot 1UP you get plenty of them. And they become instantly controllable, joining your armada and increasing your firepower to crazy heights if you're capable of keeping them alive long enough. 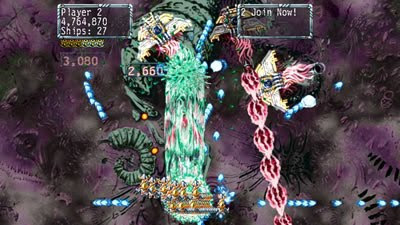 Fear no evil and trust our almighty plasma auger, for we are many

As far as I know, this phalanx concept is unique to this charming indie shmup. Beyond the simplicity of the tiled graphics and the considerably short length, the highlight of this game lies completely in the nature of its gameplay. In all three main modes/difficulties you choose one type of ship (Caduceus or Ovoid) and start the journey with a phalanx of 3 ships. These ships can be grouped together or spread out with the shoulder buttons, and for tight spots it's also possible to use a "break" button to reduce speed. Whenever at least two ships get separated by a certain gap, the act of shooting for a few seconds will generate a huge central beam, the plasma auger. Its destructive force is proportional to the number of ships and the gap between them. Weapons upgrade automatically as you keep adding 1UPs to the phalanx, with the possibility to control a maximum of 30 ships.

The basics I described above are enough to enjoy the game, but there's more to it if you want to score higher. Depending on how enemies are destroyed they drop score tablets that have to be picked up for them to be added to the score. The value of a tablet is directly related to how you kill the enemy, and by far the biggest points are obtained from using the flash/burst shield. Whenever you stop shooting, a shield will materialize around all ships: pressing the shot button will make these shields explode, causing a huge amount of damage to everything within its radius. The resulting multiplier applied to destroyed enemies is proportional to how many of them are simultaneously killed and how many ships you have in the phalanx. The amount of points you can get from these shield attacks can be outrageous. In fact, after a while it changes the focus of Shoot 1UP completely - shooting becomes second nature to the shield attack, and only gets advantageous during boss fights or when you come across Mommy's Best Games pie, an icon that drops point tablets like crazy when hit with the plasma auger.

Each killed ship in the phalanx goes off in a big explosion and damages nearby enemies, also serving as a protection for the rest of the flock. The good thing is that if you keep scoring high new 1UPs are constantly appearing, so it's not really hard to rebuild the armada. You'll only see the GAME OVER screen if you lose your last ship. There are no CONTINUES in Shoot 1UP, but they aren't needed anyway. Bullet count only gets high in later stages and during boss fights, which are the most impressive graphical achievements of the game. All bosses are huge and detailed, covering most of the screen and leaving less and less room to evade and dodge. The boss that attracts most of the attention is the woman that shoots bullets from her mechanical boobs. Yeah, you read it right, but don't worry, it's quite tame material and she's not even the final boss.

Playing safe in any of the default modes often leads to an easy clear, even with the "drifting" effect that comes with a large fleet of over 20 ships (they get harder to control without breaking and contracting). For those who crave a tougher game, the developer did add a special option that doubles game speed for a much faster experience. If it's too hard, you can decrease the game speed down to 25%. Still on the subject of innovation, some of the extra ideas in Shoot 1UP work well, others not so much. The intermediate areas where you're offered the option to change scrolling direction are very cool. On the other hand, the scoring system feels a bit unbalanced with the whole burst shield gimmick, and I just wish there was an end-of-stage bonus. The special mode - entitled Score Trek - sees you in control of only one ship on a single life in increasingly harder stages/loops, with the game saving your progress for every beaten stage. Chilling purposes aside, it's a pretty useless mode for dedicated players because of the way it treats scoring.

The soundtrack is probably the least inspired aspect in Shoot 1UP. However, the overall result is excellent because it's a genuinely fun game, be it played solo or in co-op. It's a perfect fit for a relaxing session where you can play for an even higher score without much hassle, but there are also in-game trophies for those who value achievements. The inherent accessibility for both newcomers and score addicts is a big plus, and besides the great fun factor that's probably the main reason for its success within the indie community from Xbox Live.

While I was able to beat the game in all difficulty modes, my highest 1CC score was achieved on NORMAL with the Ovoid ship, default speed (100%): 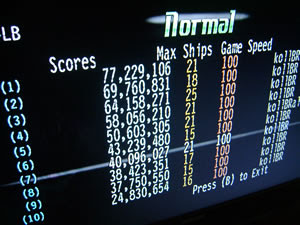