Initially available only for the Neo Geo CD, which made it exclusive for the platform for a while, Ironclad would later appear as a cartridge conversion for the AES format, as well as a downlodable title on the Wii Virtual Console. Also known as Chotetsu Brikin'ger (a very cool Japanese name in my opinion), the game is part of the Neo Geo batch of shooters that pay homage to the classic R-Type formula, combining both aggressive and defensive play styles into a memorization-ridden adventure. It seems deceptively easy up front, but eventually it turns into a fierce, demanding and brutal challenge for lovers of old school horizontal shooters.

Ironclad is also the first shmup I beat on my Neo Geo AES, which means I played it with a conversion cartridge. From what I could see in videos and pictures, it's identical to the CD version with the exception of the music, which takes a severe hit and doesn't sound as good. Nevertheless, even though the soundtrack lacks the CD flair it's still solid enough to warrant a decent pumping background for the several challenges you face in the game. Another novelty for me was beating my first shmup by playing solely with an arcade stick, in this case the iconic stock Neo Geo controller. I thought it would be harder to get used to it, but now I'm seriously contemplating the possibility of getting one of those fancy sticks for some of the other consoles I own. 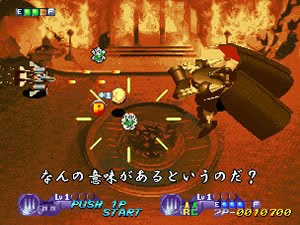 Don't sweat too much with this bastard, he's merely an illusion

Given the nature of how it plays, Ironclad isn't a game you're naturally inclined to like straight away, at least that was my impression. Getting the hang of any of the three ships available takes a while, as well as learning how to deal with the multitude of power-ups. Moreover, the graphical style, rather unique at the time of the game's release due to the oblique orientation applied to backgrounds (a precursor to the future and more famous Progear), has a tendency of using color palettes that focus on a single tone, which results in ups and downs of great looking sections intertwined with a few muddy and uninspired landscapes. The whole burning city of the first stage is one of the letdowns - the idea is great as a starting point, but the graphics surely could've used a bit more color to lure the player into the action. Thankfully the game gets better right afterwards, picking up the pace and putting the player in increasingly harder scenarios. I'm particularly fond of the parts where you fly through shafts and tunnels.

The bulk of the gameplay demands only two buttons. Fire your guns with A, manipulate an indestructible pod/orb with B. This pod is attached and controlled like the "force" in R-Type, but it will only dock in front of the ship. Mastering the use of this pod is the key to performing well in Ironclad. When the pod is attached, the main shot changes according to the current L icon you've got (blue, green or red). Holding down the fire button will activate three levels of charge, and releasing it will toss the pod forwards according to these charge levels, inflicting a great deal of damage to whatever stands in its path. When detached, pod behavior is determined by the current R power-up (blue, green and red). It will also fire a few additional shots in synch with the ship's regular firepower. The normal shot (podless ship) is upgraded with P icons in three levels, spanning 11 possible enhancements, while the act of shooting is also accompanied by a somewhat delayed single homing missile that's able to hit ground enemies.

As a last resort in moments of despair, pressing button C causes the pod to explode in a powerful burst similar to the one that happens right as the game starts. You're invincible while it lasts, but as a consequence the pod pales and loses its power completely afterwards. Once you grab another R power-up it gets back to normal, again ready for a new bomb/burst. Note: I never use this, I prefer to have an empowered pod all the time.

Surviving is gauged by an energy bar with 4 "lives". You can only take damage by getting shot at, so it's okay to lean against scenery or enemies. When latched, the orb is able to take a few number of hits to protect you, eventually self-detaching and "resting" for a few seconds before allowing the player to summon it back (no permanent shield yay!). Energy recovery items are pretty scarce, but you do get an extra energy bit every time a boss is killed.

The mission starts, amidst fire and flames
(courtesy of YouTube user PepAlacant)

Underneath the apparently straightforward look and the slightly clunky controls lies a complex gameplay structure that's not really easy to grasp, especially when you notice how to score more points by killing enemies with pod attacks. You'll make them release more medals (silver for 1.000 and golden for 3.000 points each) and even extra items - later bosses can increase the energy bar to six "lives" if you kill them with a charge shot. That's why it's important to time their deaths by looking at their health meter on the top left of the screen. Another very important hint for scoring: the pod is also able to hit and kill most enemies by contact if it's attached and charged to the max.

Ironclad is a tough game and has its share of walls (such as the 3rd boss) but on the other hand it presents itself with a wealthy deal of variety. Stage branching is implemented in a Darius-like fashion, and you rarely fight the same boss in parallel routes - it's also possible to reach the end by playing from 4 to 6 stages. The main weapon is powered up differently for all ships, which also vary considerably in speed and weight (the faster the lighter/weaker, the slower the heavier/stronger). Even though Ironclad has a knack for occasionally flooding the screen with enemies, the rather large hitbox is never an issue. Bosses often threaten you with menacing messages before unleashing the most diverse attack patterns, and some of them provide epic fights. The last boss in stage 6C is certainly one of the trickiest bastards I've ever fought in any horizontal shooter. It might be brutal, but it's fun and, as expected, quite rewarding.

The attract mode tutorial in the conversion cartridge I got appears in Spanish, but all other messages are displayed in English (North American console). Some mild slowdown can be expected, but other than that there are no other gameplay issues. Technically, the product is perfect and I definitely recommend it to those who shun the dreaded Neo Geo CD hardware but still want to play the game.

My path of choice was 1A-2A-3B-4B-5B-6C, and the difficulty was set to MVS. I used the Bristol mk. 0 ship (the middle one) for its balanced performance on all levels. My favorite power-ups were green/blue (L for shot while attached) and green (R for pod behavior). And here it is, my first and proud 1CC result in a Neo Geo shmup: 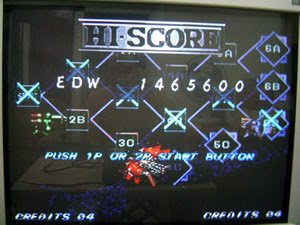