First there was Gradius, the absolute classic. Then came Salamander/Life Force, the bastard albeit sympathetic off-shoot. And here we have Gradius II, the sequel to the original game. Contrary to what anyone would think given the massive success of the first chapter, this particular port never left Japan. I was always intrigued by this, but now I have some foggy theories for why Konami didn’t bother to bring it over from Famicom to NES territory.

Arcade Gradius II is a very polished shooter that excels at teaching the player the meaning of failure. Adapting such material to 8-bit standards must have been tough, or at least tougher than making the same transition for Gradius. On aesthetical merits alone Gradius II on the NES is decent, downscaling the original material in an effective way while adding a few extra bits of exclusive design (my only complaint is the washed out color palette in a few sections). Where it all falls apart though is in the challenge factor. It’s as if Konami had forgotten how hard a Gradius game should be. For seasoned Gradius fans and players, Gradius II on the NES is a laughable joke because it lacks the shooter “sting” that has been a trademark of the series since it started.

Vic Viper does not appear on screen until you start a credit. There are four weapon configurations to choose from, ranging from the regular array seen in Gradius to new options with photon torpedoes in place of missiles, tail gun replacing double shot and ripple laser instead of regular laser. The old frontal shield is gone and is permanently replaced by the force field for all configurations. As the game starts the drill remains the same: collect capsules, activate the highlighted slots of the weapon array to get the upgrades and be on your guard for whatever comes your way. 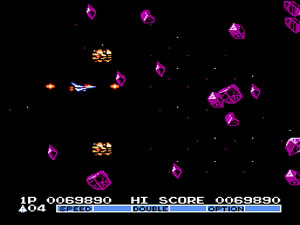 Despite the utter lack of intensity, this port deserves at least a mention for the little tweaks made to the basic gameplay. Similar to what had been previously done in Parodius, double shot/tail gun and both lasers can be powered up twice for a greater firepower level. Contrary to the limitations seen in Gradius and Salamander, here you can get up to four options instead of two (for those wondering, Life Force allows three options). Speaking of options, once you get four of them you’ll notice that the option slot in the weapon array is still available. Activate it one last time and all options will circle the ship for a brief while, practically giving it a close-range protection against nearby enemies. Last but not least, the force field is the size of the ship, so now there are no worries about depleting it just by grazing walls. It’s an ugly force field though, I wish Konami had kept the original shield.

If one considers the pre-stage (that short section with the incoming wave drones that bring capsules) as the checkpoint for the start of a level, the conclusion is that this game has six stages. Some stages of the original game were combined into one here, such as the volcano and crystal levels (3rd) and the boss rush, high speed and fortress sections (5th). Some parts have no bosses anymore (volcano and high speed), one boss was replaced with a different version (the eye-spitting reject from Salamander in the boss rush) and a new extra skull boss appears at the end of the 2nd stage. The final level is explicitly inspired by Salamander, complete with organic nets and huge, cheap spikes protruding from walls. Speaking of cheapness, the worst offenders are the first and the final stages, where you’ll inevitably die until you memorize the path amidst the flame arches and those dreadful spikes.

Another specific trait of the NES Gradius II is that pretty much anything that moves or shoots can be destroyed, including wall tentacles, tips of volcanoes and the famous mechanical spider (all originally invincible). In a fashion similar to the first game on the NES, this one has an interesting characteristic regarding the rate of fire: there’s no autofire upon start, but once you get at least one option you just need to keep the button pressed to play normally without mashing it like crazy or having to use a turbo controller.

Flicker gets overwhelmingly present in a few key areas, such as the section with the crystal blocks, but surprisingly enough slowdown isn’t much of a problem. I was afraid it would get out of hand when Vic Viper was equipped with four options. However, this seems to have been achieved at the expense of enemy bullets since bullet count is so low that you sometimes wonder if this is really a Gradius game. Pre-stage drones, for instance, will never shoot at you. It’s clear to me that these technical compromises ultimately killed the challenge. Add to that the merciful extend scheme, where a new life is granted for every 30.000 points scored, and the lack of any difficulty rise in further loops. The only difference I noticed is in the core barriers of the boss rush main enemy, which spew bullets when destroyed.

I’ve read information saying that the cartridge uses a special chip that provides, among other things, the digitized voices you hear when an upgrade is activated (very clear voices by the way). The strangest thing is that although the voices are nice and the music is good, sound effects are rather poor. For example, there’s no sound for when your shots hit the common drones. That could be one of the reasons why the game wasn’t ported over to the west, the other one would be the butchered difficulty that put the responsible people inside Konami to shame. For much better home ports check the Saturn, the Playstation or the PC Engine CD libraries.

Surely casual players won’t care about the downgraded difficulty, but for fans of the series Gradius II for the NES ends up being nothing but a forgettable experience. It’s fun while it lasts, but it’s got virtually no replay value. When you get to the fourth loop like I did and you notice that you have 73 spare lives you know something’s terribly wrong (the mechanical spider alone is worth something close to 10 extra lives). I completed two loops unscathed and died out of boredom a few times in the 3rd loop, but got back up with little to no sweat. I turned off the console after taking the picture in stage 4-1. The game was played with the type 1 configuration, no turbo controller was used. 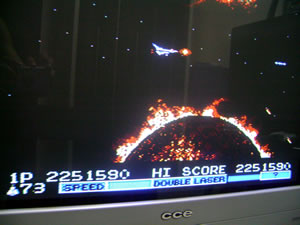